University of Florida Apologizes After Black Graduates Were Manhandled at Commencement

Several African American graduates at the University of Florida are speaking out after a white faculty member forcibly rushed them off stage at one of the school’s commencement ceremonies on Saturday. The students said they were observing a long-held tradition among black fraternities and “strolling” after getting their college degrees when the usher grabbed them and roughly shoved them along.

“During one of this weekend’s commencement ceremonies, we were inappropriately aggressive in rushing students across the stage,” he tweeted. He also pledged to personally apologize to all of the students involved.

The school has not yet identified the faculty member, who was clad in a colorful blue and orange gown.

Multiple videos shared on Twitter show black students who danced onto the stage being quickly pushed or yanked away by the usher, who the school later said was a faculty member.

Oliver Telusma, 21, who was getting his bachelor’s degree, said the man grabbed him under his arm pits while he was dancing across the stage.

“I had just started … and he picked me up and turned me around, which I thought was kind of embarrassing and degrading to be handled in that manner,” Telusma told the Gainesville Sun. “It was just really uncalled for, especially for anyone not martially trained to do that.”

Another student, Christopher Garcia-Wilde, 21, said he had been planning to dance across the stage but was too scared after seeing other students be pushed and ultimately decided not to.

Garcia-Wilde said “strolling” across stage is a commencement tradition for black fraternities and sororities at the University of Florida.

Margot Winick, a University of Florida spokesperson, told the newspaper that “the university just regrets that the acts of those who were monitoring the lineup could dampen the spirits of the day. That’s not at all what commencement is about — it’s about celebration.” 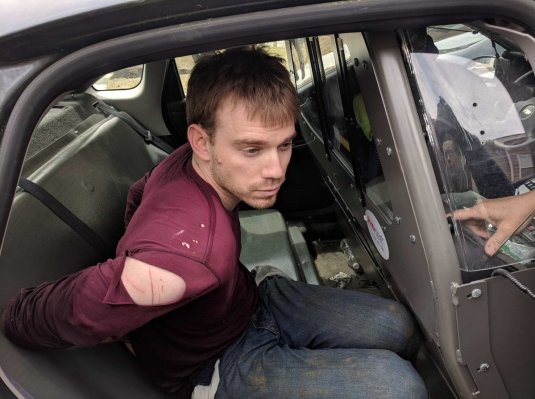