An off-duty police officer in Orange County, Calif. pulled his gun on a man at convenience store because the officer thought he was stealing a pack of Mentos, according to the Orange County Register.

Jose Arreola, 49, walked into a Chevron gas station in Buena Park to use the ATM and buy a pack of Mentos for his wife on March 16 when he was accused of stealing the mints by a man behind him in line, who was an off-duty police officer with a gun in his pocket.

In surveillance video of the incident, which seems to have been released recently, Arreola can be seen picking up the Mentos and handing the cashier money for the pack of mints, which cost $1.19, before the off-duty police officer gets in line behind him. As Arreola pockets the mints, the police officer says “Put that back, I’m a police officer,” and pulls out his gun.

The officer’s index finger is not on the trigger, but the gun is pointed in Arreola’s direction. Arreola tells him “I paid for this,” but the police officer repeatedly tells him to put the pack of mints back.

“He tried stealing that from you,” the officer says to the cashier. “Get your cash and leave,” he then says to Arreola.

At the end of the video, the officer can be seen twice asking the cashier if Arreola paid for the mints. The cashier says yes both times. The off-duty officer then turns and says “my apologies” to Arreola before walking out of the store.

“It’s been a month and I still can’t shake it,” Arreola told the Register. “It was traumatic, the whole incident. (And) I grew up in Santa Ana. I’ve been shot at before.”

Buena Park Sgt. Mike Lovchik told the Register that an internal investigation is being conducted but declined to give further comment to the local newspaper.

The chief of the Buena Park Police Department called the video “disturbing” in a Facebook post published Friday and said “if the officer is found to be in violation of any policies and procedures, he will be held accountable.”

It was not immediately clear why it took weeks for surveillance video to be released. 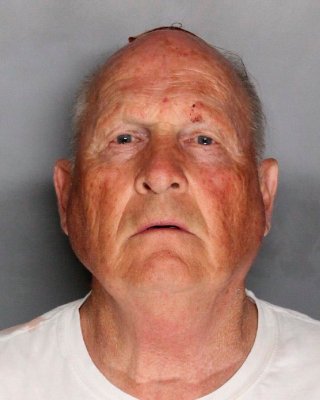 Police Say the Golden State Killer Has Been Caught. Who Is Suspect Joseph James DeAngelo?
Next Up: Editor's Pick