Why Republicans Should Fear a Rural Revolt in 2018

Republicans in Washington are busy at work on policies that could hurt the rural voters who will decide if they keep their majorities in Congress.

In at least four major ways, Republican lawmakers and leaders are currently working directly against the interests of the rural areas where President Donald Trump dominated the electoral map in 2016 and where races this November could prove decisive in control of Congress.

In each case, the decision to move ahead comes entirely from the GOP side, while Democrats could be poised to win points with rural voters if they derail the policies.

The potential trade war is the brainchild of Trump, who has long felt that the U.S. should take a more aggressive stance toward foreign trade. Upset about a trade deficit with China — which most economists dismiss as not as important as the president thinks — Trump has ordered up tariffs on Chinese-made goods.

China, in response, is ready to punch back with tariffs on products such as American pork, tobacco and soybeans — wares that come from some of the most-contested House districts in the country.

Another looming fight is centered in Congress, where the existing Farm Bill will start to run out of money in September. Although the bill rarely makes national headlines, it is closely tracked in agricultural areas and has broad effects throughout the country.

Beyond determining what goes into school lunches and providing for cheap corn at the market, the bill touches almost every meal in America. But the proposed replacement includes deep cuts to subsidies and that could mean troubles for family farmers, higher costs for parents and less cash being spent in rural towns.

The Congressional Budget Office put the cut at $1.5 billion over the next decade compared to the current law. And while Americans overwhelmingly tell pollsters they are against subsidies, some communities are quite reliant on them. For example, Nebraska’s sprawling Third Congressional District collected $11.9 billion in Agriculture Department subsidies between 1995 and 2016, according to one tally. The average farm household in the United States earns just shy of $118,000 a year — well above the $83,000 average American household. Direct payments to farmers or subsidized insurance play a part in that.

The Farm Bill also includes what most call food stamps, or financial help to feed 40 million poor Americans. Including this program in a Farm Bill is largely a way to secure votes from lawmakers from urban districts that don’t benefit directly from things like soybean subsidies. But the reality is that hunger is universal.

Some analyses of the anti-hunger efforts, technically called Supplemental Nutrition Assistance Program, show beneficiaries are more likely to live in rural areas while others say roughly one-in-five families in rural areas are what the government calls “food-insecure.”

Regardless, politicizing the popular aid program will not burnish the image of the Republican Party that controls the White House, the House and the Senate.

The House version of the Farm Bill also inserts a work requirement for those who retain eligibility in the slimmed-down food-stamp benefits. House Republicans inserted that provision for 20 hours of work or training each week over unified Democratic opposition and said it was meant to show that food stamps are not a handout program.

“We believe that breaking this poverty cycle is really important,” Agriculture Committee Chairman Mike Conaway of Texas said. But the unemployment rate on Friday hit a new low since 2000, rural jobs are harder to come by than urban ones, and rural residents are more likely to face poverty.

As written, the new law would kick as many as 1 million Americans off the program and cut spending on feeding the poor by $9.2 billion in the next decade.

All of this is coming just as Congress turns full-tilt toward election season that already has the GOP in a defensive crouch. Democrats need to net just 23 seats in the House to claim the majority for the first time since 2011. At least 47 House Republicans have announced they won’t be running for their seats again this fall and are approaching a record for voluntary exits set in 1992. House Speaker Paul Ryan has announced he’s among them, signaling perhaps that the GOP majority is at risk.

Republican strategists privately say the House version could blow up in their faces if Democrats make this a campaign issue, especially in districts heavy in the outer suburbs and the farms. These Republicans, however, note optimistically that the President could blunt much of that. Rural areas were the only places where the President topped 50%, according to exit polls. Today, he tends to run about 10 percentage points higher in rural areas than suburban ones, and 20 to 25 points ahead of voters in cities.

But for Trump to make a positive impact on specific rural races, lawmakers would have to persuade the President to go into rural areas, far from mega-rallies in stadiums he prefers and stay on message, something he struggles with.

Look at a map of Congressional districts. The vast swath of red districts where Republicans are incumbent neatly matches where agriculture powers the economy. Voters in these places may be conservative and support Republicans when nothing is at stake. But start messing with their pocketbooks and they may be less reliably Republican than many incumbents want to believe.

The House Committee on Agriculture passed its version of the bill along a party-line vote. The full House is expected to take it up next week and send it along — likely without significant Democratic support, if any — to the Senate.

When it gets to the Senate, however, expect changes. Kansas Sen. Pat Roberts, the chairman of the Senate Committee on Agriculture, Nutrition and Forestry, is a canny leader. Already, outside groups are lobbying him to change whatever the House sends him. Fiscal conservatives say too many subsidies remain. Social conservatives want those receiving food stamps to be required to undergo drug testing. Liberals want to kill the food stamp work requirement and expand access to more families that make up the working poor. Environmentalists say the bill doesn’t do enough to protect waterways and air quality and the $800 million cut to conservation programs is devastating.

In rural communities, the looming vote is dominating opinion pages, town hall meetings and the local news. This, more than anything written in Washington, will shape voters’ opinions of their representatives.

But to clear the Senate, where Republicans have 51 seats and Democrats have 49, supporters will need some patina of bipartisanship. Among the Democrats facing both re-election this fall and pressure to improve the Farm Bill are Senators from Montana, North Dakota, Wisconsin, Missouri, Indiana, Ohio and West Virginia.

Rural voters will be watching — and perhaps ready to reward Democrats who step in to curb setbacks included in the House version. 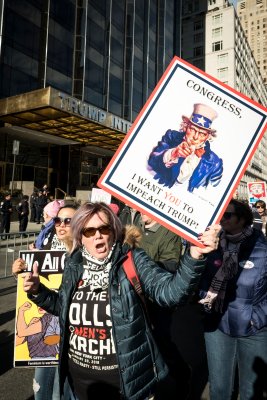 Why Democrats Would Prefer This Senate Candidate Not Talk About Impeachment
Next Up: Editor's Pick