Trump Says Second Amendment Rights Are 'Under Siege.' But He Vowed to Defend Them in Defiant NRA Speech

President Donald Trump rallied his base at the National Rifle Association convention on Friday, telling thousands of gun rights supporters that he would fight for the Second Amendment while also offering his thoughts on the midterm elections, immigration laws and the Russia investigation.

“Your Second Amendment rights are under siege,” Trump told the sold-out crowd of approximately 8,000 people who descended on the Kay Bailey Hutchison Convention Center in Dallas, Texas on Friday. “But they will never be under siege as long as I am President.”

But that somewhat contradictory remark about Second Amendment rights currently “under siege” was only one portion of a speech that was clearly meant to appeal to his most ardent supporters. After that, Trump spoke for 25 minutes about an array of topics from the Russia investigation, in which he praised a Virginia judge who had argued Friday that Special Counsel Robert Mueller is operating with the sole aim of turning Trump’s former campaign manager Paul Manafort against him, to the singer Kanye West, who he credited with raising his approval rating among African Americans. (This was apparently a reference to a recent Reuters poll). He slammed the Iran deal, even making fun of former Secretary of State John Kerry for breaking his leg in a bicycle accident in 2015.

Attendees at the National Rifle Association convention in Dallas on May 4.
Gabriella Demczuk for TIME

Trump dispersed other mentions of his Second Amendment advocacy throughout the hour-long speech. He noted the biggest thing standing in the way of people who wanted to abolish Second Amendment rights were conservatives in Congress who were fighting them. He reiterated his Administration’s support for school safety plans, and he said he was in favor of highly trained teachers carrying concealed weapons — something he initially discussed in the immediate aftermath of the Parkland high school shooting in Florida earlier this year. And he argued that gun-free zones were only fodders for mass shooters. But this rhetoric on guns was sandwiched between Trump’s opening comments, and remarks on the nation’s immigration laws, which he called “the worst in the world.”

Trump joined Vice President Mike Pence, whose speech preceded his, on the list of speakers at the NRA’s leadership forum on Friday along with Texas Senators Ted Cruz and John Cornyn. This was not the first time Trump spoke at the event — he’s given speeches since 2015 — but his address last year marked the first time a sitting President addressed the convention since Ronald Reagan, an indication of his strong relationship with the organization. The NRA spent more than $30 million to help get Trump elected in 2016, according to the Center for Responsive Politics, and his gratitude was reflected in last year’s remarks. “You came through for me, and I am going to come through for you,” he said at the time.

Essex Johnson stands watch in the arena during the National Rifle Association convention in Dallas on May 4.
Gabriella Demczuk for TIME

But in the aftermath of the deadly high school shooting in Parkland last February that killed 17 people, public sentiment against the NRA seemed to turn a corner, with surviving students ratcheting up criticism on social media, and various businesses severing ties with the organization. Trump, at one point, seemed to flirt with distancing himself from the group’s policies, telling members of Congress in February they should feel free to defy the NRA in passing a comprehensive school safety package. “They have great power over you people. They have less power over me,” he told the lawmakers. “What do I need?”

Two months later, his remarks to the NRA struck a very different tone. With the midterms elections rapidly approaching, and his party’s success largely resting at his feet, Trump may find he needs quite a lot from the NRA— chiefly the votes from their members. Even though he predicted a victorious election season for the Republicans, he urged everyone in attendance to head to the polls in November.

“We cannot get complacent,” he said. “We have to win in the midterms.” 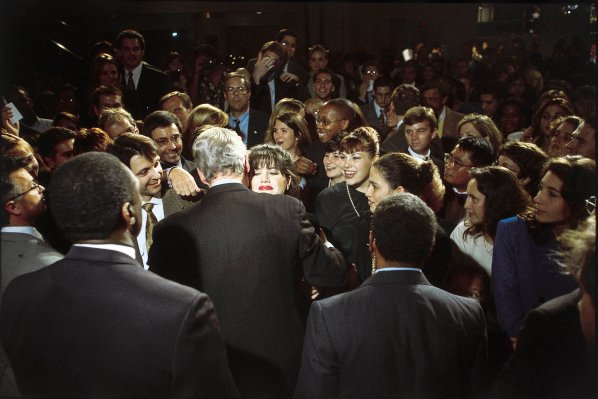 From an Anonymous Tip to an Impeachment: A Timeline of Key Moments in the Clinton-Lewinsky Scandal
Next Up: Editor's Pick