Hawaii Volcano at Risk of Explosive Eruptions That Could Eject 'Ballistic Projectiles': The Latest on the Kilauea Volcano

Hawaii is bracing itself for even more destruction from the Kilauea volcano as officials warn it is at risk of “explosive eruptions.”

As the Kilauea volcano’s lava lake continues to sink down, the U.S. Geological Survey says it could set off steam-driven explosions, sending “ballistic projectiles,” including ash clouds and rocks, into the air, Hawaii News Now reported Wednesday.

18 fissures have now opened up as a result of the volcanic eruption, with the latest fracturing on the Kalapana side of Highway 132. It is already spewing steam and lava spatter activity, according to an emergency message update from the County of Hawaii’s Civil Defense department. The 16th fissure, which opened on Saturday, is nearby a geothermal plant, according to the USGS, and workers there removed 50,000 gallons of pentane stored onsite as a cautionary measure, according to the Associated Press.

President Donald Trump declared the volcanic explosion a major disaster on May 8, ordering federal assistance to “supplement State and local recovery efforts in the areas affected by severe storms, flooding, landslides, and mudslides,” according to a White House statement.

Hawaii Volcanoes National Park is closed until further notice, according to park officials.

The lava spilling from the eruptions has destroyed at least 26 homes and a number of other shelters around 387,500 square feet from the most active fissure, the Associated Press reported Monday. The U.S. Geological Survey has recorded 1,301 earthquakes on the Island of Hawaii in the last week as the Kilauea volcano continues to erupt.

“We just want to keep everyone safe and continue to look at what we can do to prepare,” Hawaii Gov. David Ige told KITV, a local news station when he visited the community in Pāhoa county on Tuesday. “As you know we don’t believe this is the end of it.”

Eruptions at the edge of Hawaii’s Kilauea volcano continued over the weekend after the most powerful earthquake in 43 years rocked the island. The earthquakes are due to built up magma along the volcano’s rift zone, according to Hawaii News Now.

A 6.9-magnitude earthquake hit the area near Leilani Estates — a subdivision of nearly 2,000 that’s about 220 miles from Honolulu — on Friday night, according to the USGS. Not only did the Kilauea volcano produce Hawaii’s strongest earthquake since 1975, but it also opened six new fissures inside Leilani Estates, sending lava into a residential area, the Hawaii Tribune-Herald reports.

Federal authorities point out that thousands of earthquakes rattle Hawaii every year – even when there aren’t volcano eruptions.

On Saturday, there were reports of a seventh and eighth fissure in the area, Hawaii Public Radio reports. Leilani Estates resident Shane Turpin posted a video of the seventh fissure — which was spewing flame and lava — on Facebook Saturday.

“Some people are definitely going to be losing some stuff today if this keeps going,” Turpin told Hawaii News Now.

“It sounded like if you were to put a bunch of rocks into a dryer and turn it on as high as you could. You could just smell sulfur and burning trees and underbrush and stuff,” resident Jeremiah Osuna told Honolulu television station KHON.

Here’s everything we know so far about the 2018 Kilauea eruption, the mandatory evacuations and when the volcano has erupted in the past.

What do we know about the volcano eruption in Hawaii?

Lava flows from the crater of Kilauea volcano as dozens of structures, including at least nine homes, have been destroyed by scorching lava flows following a massive volcano eruption on Hawaii's Big Island, USA on May 6, 2018. Hawaii's Kilauea volcano erupted Thursday triggering a series of earthquakes that have continued to rattle the island as burning blood-red lava spewed hundreds of feet in the air from cracks in the ground. The strongest earthquakes were felt Friday when a 5.6-magnitude temblor was followed an hour later by a 6.9-magnitude earthquake, according to the U.S. Geological Survey (USGS).
Anadolu Agency—Getty Images

Around 1,700 people were forced to evacuate, according to the AP, as communities like Leilani Estates were at high risk. Lava was confirmed at the edge of the Leilani Estates subdivision at around 5 p.m. Thursday, CNN reported, and Friday’s earthquake struck just 16 kilometers southwest of the area. However, that wasn’t the only area affected. The Lanipuna Gardens subdivision was also forced to evacuate.

Lava had already flowed in the streets of the subdivision, according to Hawaii Gov. David Ige, who activated the Hawaii National Guard to assist with ongoing evacuations.

Kilauea’s eruption was triggered by a series of small earthquakes earlier this week — and one 5.0-magnitude earthquake Thursday evening — that pushed lava into new underground chambers, according to the AP. That increased lava flow made Puʻu ʻŌʻō, a specific section of Kilauea that has been continuously erupting since 1983, more active — spewing smoke and steam from the volcano. Friday’s 6.9-magnitude earthquake opened an additional six fissures, with a seventh and eighth reported on Saturday.

Kilauea, which is considered the most active of Hawaii’s five volcanoes, is about 212 miles southeast of Honolulu.

Map of distance between Kilauea, Hawaii's most active volcano, and Honolulu.
Google Maps

The volcano is situated near several small Hawaiian towns that could be affected by the latest eruption — especially if lava continues to flow for weeks, or even months.

When was the last time Kilauea had a major eruption?

Kilauea is Hawaii’s most active volcano and parts of it have been continuously erupting since January 3, 1983. But the last major volcanic eruption at Kilauea was in 2014 and lasted for several months.

People are advised to stay away from the evacuated areas near Kilauea, which are on the south side of the island of Hawaii, about 30 miles from Hilo.

Hawaiian Airlines is offering customers travel waivers for flights scheduled for Thursday, May 3 and Friday, May 4. The new flight must be booked by Friday, May 11 and have to be made for seats in same flight class with the same origin and destination.

The Department of Education also announced that several schools were closed on Friday because of the volcano eruption.

What can you do to help?

There are a number of ways to help those impacted by the eruptions and earthquakes on the Big Island.

For those nearby, community officials have created donation centers where residents can give away bedding, clothing, water, food and more for evacuees, according to Hawaii News Now. Food and water donations can also be given to a number of community shelters and food banks on the island. Red Cross volunteers are also managing two centers on the island, and they are accepting donations for non perishable food items, fruit and canned goods, according to Hawaii News Now.

Those outside of the island can donate funds for specific families or for disaster relief efforts. GoFundMe, a donation website that often serves as a go-to resource for those in need, created a verified page of different campaigns for families who lost their homes, items and more as a result of the eruptions. In partnership with the American Red Cross, AT&T also created a line for users to text donations to. If users text REDCROSS to 90999, they can donate $10 to Red Cross relief efforts.

Jennifer Calfas contributed to this story. 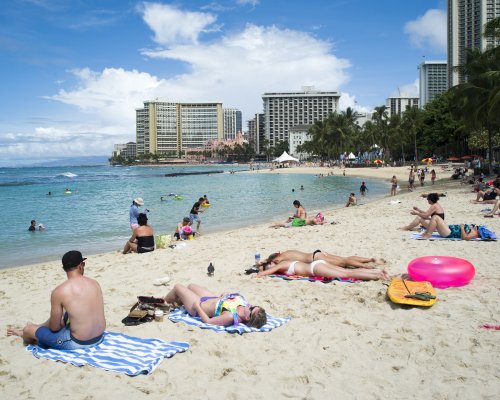 Hawaii Moves to Ban Sunscreens Harmful to Coral Reefs
Next Up: Editor's Pick