The Classic British Pub is Trying to Survive Challenging Times

The Churchill Arms pub is decorated with Union Jack flags on May 29, 2012 in London, England.
Peter Macdiarmid—Getty Images
By Kate Samuelson / London

Like many British septuagenarians, David Charles Graves lived alone. The 75-year-old, known by everyone as Charlie, had no close friends or family; it’s perhaps why he became such a fixture at his local pub, the Ivy House in Nunhead, south east London. Ivy House regulars became as familiar with the sight of Charlie sipping a pint of Becks lager at the bar as they did with the pub’s quirky stage and furniture restored from the 1930s.

Charlie’s attachment to his local pub will resonate with many Britons. As far back as Roman times, when roadside inns offered comfort to travelers, pubs have occupied a unique place at the heart of British society. In Shakespeare’s time, there was roughly one pub for every 200 people and they feature in several of his plays— in Henry IV, for instance, Prince Hal, Falstaff and others constantly wander in and out of the Boar’s Head Tavern in Eastcheap, east London. George Orwell’s famous 1946 ‘Moon Under Water’ essay, describing the 10 key points of his ideal pub, notes that alongside draught stout, open fires, cheap meals, a garden and no radio, “the barmaids know most of their customers by name, and take a personal interest in everyone.”

Today, pubs still play a part in alleviating social isolation, particularly among elderly Britons like Charlie. Research by the University of Oxford shows that these watering holes can improve people’s engagement with their community and social network size, ultimately affecting how satisfied they feel in life.

Pubs have also become a high-ranking tourist attraction. According to research by the British tourist board, visiting a pub is the third most popular activity for international visitors to the U.K. Over time, the pub has become a symbol of the national spirit, and themed British pubs can be found in cities around the world.

Imagining Britain without pubs is like thinking of France without its café culture, New York City without yellow taxis or Tokyo without karaoke bars. But this defining national cornerstone is under threat. According to the Morning Advertiser, the U.K.’s leading trade newspaper for the pub sector, two public houses now close their doors for good every day. Is the good old British pub on its way to extinction?

Pubs have been declining in number for decades, but many believe England’s 2007 smoking ban, which put an end to smoking in all enclosed public and work places, exacerbated the trend.

Over the next eight years, the U.K. lost nearly 7,000 pubs, the majority of which were wet-led, meaning they only served drinks. “The smoking ban affected pubs enormously,” says Brigid Simmonds, CEO of the British Beer and Pub Association (BBPA), a major trade association. “A lot of pubs closed and many had to redefine themselves.” Some public houses branched out to offer food and accommodation; pubs now serve a billion meals a year and have 50,000 bedrooms attached to them.

But converting to a gastropub or inn is not an easy fix. Many pubs are located in Victorian, Edwardian or other historic buildings, which bind them to rigorous planning restrictions. These restrictions disincentivize investors who may have otherwise been interested in converting failing drinking dens into more profitable establishments. Climbing real estate prices, particularly in London, make pubs attractive prospects for developers—that is, if they have the permission to knock them down and build apartments instead.

Competition is also getting fiercer. Around 20 years ago, there were roughly 70,000 premises licensed to serve alcohol in the U.K.. Today, around 50,000 pubs and 70,000 other premises, from restaurants to coffee shops, have an alcohol license. “The sheer growth in the eating-out market over recent years means there’s massive competition,” says John Longden, founder of ‘Pub is the Hub,’ a not-for-profit group that offers support to licensees across the country. “You’ve got supermarkets selling beers, wine and spirits at a cheaper price than pubs, so people will drink at home. And now, the younger market is saying ‘actually we’re not drinking.’”

Tastes are changing in other ways too; beer consumption is falling, with more than half of 25-to-34-year-olds now favoring wine instead. A Nielsen poll found that sales of sparkling wine surged by 14.7% in 2016, and an overview by the Wine and Spirit Trade Association that same year found that nearly half of all drinks sold in new pubs, bars and restaurants were wine and spirits and not the more traditional pints of froth-topped ale.

High tax on beer—making up around a third of the cost of a pint—has further contributed to pubs’ woes. The last center-left Labour Party government introduced a now-defunct “duty escalator” policy in 2008, justifying the price hike in the budget with: “as incomes have risen, alcohol has become increasingly more affordable.” The move, which increased the price of a pint by 2% above inflation, had a devastating effect on the sector, with industry experts claiming the policy reduced sales of beer by as much as 16%. The closure of around 5,000 pubs can be linked to the Labour policy, according to Tim Page, chief executive of consumer organization The Campaign for Real Ale (CAMRA). The escalator was axed in 2013 following heavy lobbying, but its effects are still felt by the U.K.’s pubs and brewing industry.

A great disparity between the cost of alcohol in pubs and supermarkets is another major issue; when six 275ml bottles of Beck’s lager cost £5.10 ($7.19) in Tesco, one of Britain’s biggest supermarket chains, spending the same amount if not more on one pint in a pub is not a particularly attractive prospect. “If you want pubs to survive decades down the road, then it’s common sense that you can’t tax them more heavily than what is the market rate,” says Tim Martin, founder and chairman of pub group JD Wetherspoon, which has 900 establishments around the British Isles.

All this is in the shadow of Brexit, the U.K.’s looming March 2019 exit from the European Union, bringing with it uncertainty and division.
Some pub owners believe Brexit could turn things around for them; a poll conducted shortly before the 2016 referendum found that more small-food-service operators said they would vote to leave rather than remain. Martin was a major Brexit backer; he even printed 200,000 coasters calling for the U.K. to “take back control.” He believes that without the E.U.’s high tariffs on food and drink imports, their prices will decrease and pubs will flourish.

However, as with much of the service industry, Brexit is likely to have a considerable impact on pubs’ workforces. In 2016, hospitality-intelligence firm Fourth Analytics estimated that 43% of workers in the hospitality industry come from overseas; in more metropolitan areas, this proportion can be even higher. It is still unclear whether these “soft-skilled” workers will be allowed to remain in Britain after March 2019; the government is in the process of assessing the economic and social contributions of E.U. migrants and isn’t due to report back on its findings until September of this year.

“We need to make sure people who are currently here can stay here,” says Simmonds, whose BBPA did not have an official position during the referendum. “We have to ensure Brexit isn’t only about highly skilled, highly paid workers.”

Regulars playing cribbage at the Mowbray in Failsworth, Oldham, Greater Manchester. The pub is owned by Amber Taverns, who reopened in four years ago after the building was previously a public house but had been vacant for a number of years.
Colin McPherson—Corbis via Getty Images

These varied challenges are forcing pubs to think creatively. Longden’s ‘Pub is the Hub’ advises licensees on providing a wide range of local services and activities, from building shops, libraries and post offices, to providing meals for local schools or the elderly. (One pub in southwestern England even introduced a community playground designed entirely by children, featuring a bar serving mud and a ‘bug hotel’.)

Pub is the Hub claims to have helped nearly 500 pubs across the U.K. offer 27 different services, helping them stay afloat. Longden tells TIME about a recent check-up visit to a pub in Cornwall, southern England, six months after his team of volunteers had helped install a playground there. “The licensee told us his pub had been packed out every Saturday afternoon and joked that it had become known as the ‘pint and play,’” he says.

Communities are increasingly stepping in to save their local drinking establishments. In 2013, Charlie’s local, the Ivy House, narrowly avoided being turned into an apartment block thanks to a group of residents who spent more than a year fighting to bring it under community ownership. In 2013, it became the first cooperatively-owned pub in London, thanks to a policy introduced two years earlier. Under the new policy, communities are able to nominate buildings and land for listing as “an asset of community value.” Once listed, the community may have the opportunity to bid to take control of the asset if it is put up for sale, as residents did with the Ivy House when its future was threatened by a developer.

Initially, 371 individuals purchased shares in the pub for £100 ($132) each, with a minimum investment of two shares per person. Not all of the shareholders were local. “They come from as far and wide as Canada and New Zealand,” says Emily Dresner, co-chair of the Ivy House committee. “Some people revealed to us that they didn’t drink and didn’t have any intention of visiting the pub, but still wanted to get involved in a great community initiative.” The Ivy House is part of a greater trend; there are more than 60 cooperative pubs open and trading in the U.K. and the number is predicted to continue to grow.

Innovations like these have been key to keeping pubs alive in an increasingly competitive marketplace. “Pubs provide a cross between a coffeeshop, a restaurant and a church. It’s hard to define the attraction but you know it when you see it,” says Wetherspoons’ Martin.

Going to the pub no doubt made the Ivy House’s Charlie feel part of his community. When he stopped turning up for his regular pint last summer, locals began asking after him. Eventually, it transpired that he had fallen ill and swiftly passed away. Despite not knowing much about the elderly man other than his drinking habits, the Ivy House managers decided to hold a memorial service for him and were shocked—and moved—when around 150 pub regulars turned up to pay their respects to a gentleman they barely knew.

It’s a testament to the role that the pub has played in British communities for generations, says Matt Soper, secretary of the Ivy House management committee. “I knew how many people knew him but didn’t realize how many would show up,” he told TIME. “It was proof of how successful this place has been— not just in business terms, but in the sense of being true to the spirit of a real community pub.”

Right now, pubs seem in danger of disappearing but if there’s one astonishingly simple way that ordinary Brits can save the good old pub: by going to one. “There’s no point sitting at home and saying pubs are wonderful if you never visit one,” says Simmonds of the BBPA. Instead of mourning the loss of the great British pub, Brits should celebrate their existence in the only way they can…over a pint. 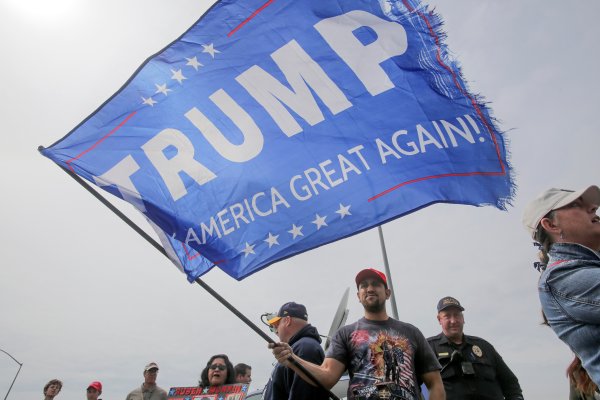 Our 'Us Vs Them' World: 5 Reasons Why Globalism Is Failing
Next Up: Editor's Pick