Donald Trump Has No Legal Strategy. But What He's Doing Just Might Work

Standing before Marine One Friday morning, President Donald Trump criticized reporters and his own lawyer for getting facts wrong, misstated a handful of facts himself and then promised to put out a statement later clarifying everything.

It was a dizzying end to a chaotic week that left legal experts mystified on the underlying strategy.

After a full day of headlines, Trump took it upon himself to simultaneously defend and disparage Giuliani.

“He’s learning the subject matter. He’s going to be issuing a statement, too,” he told reporters. “He started yesterday. He’ll get his facts straight.”

Former federal prosecutors, including veterans of independent investigations like the one Trump faces, say it’s hard to discern a legal strategy behind all this. But they say it does make sense as a public relations strategy aimed at saving the president politically. And because of the nature of the presidency itself, those legal questions will ultimately be political ones anyway.

“I think it’s a two-time thing: let’s delay, let’s get this into court, and let’s continue to bash my own Department of Justice,” he said.

In a series of interviews on Wednesday and Thursday, Giuliani walked in Trump’s own footsteps, calling Special Counsel Robert Mueller’s investigation “tainted” and “garbage,” arguing that Deputy Attorney General Rod Rosenstein should shut it down and comparing the FBI agents who raided Trump’s personal attorney Michael Cohen last month to “stormtroopers.”

Robert Bennett, who represented Clinton during Starr’s investigation, warned that those tactics may backfire, saying he sees “very little benefit” from directly attacking Mueller and the Department of Justice generally.

“I certainly question that as a long-term strategy that will work to the president’s advantage,” Bennett told TIME. “I have no doubt that the hardcore Trump supporters like it, that [Giuliani’s] being so tough and aggressive, but I don’t know if he’s going to win over anyone else.”

Clinton’s legal team was also known for their attacks on Starr and the investigation. But, Bennett cautioned, criticism doesn’t mean refusal to cooperate. “You can be tough, you can have an iron fist, but its better to have it in a velvet glove than swinging a meat axe,” he said. “You can criticize, but you don’t personally do whats being done.”

It may also be unnecessary, from a legal standpoint. It is longstanding policy for the Department of Justice not to indict a sitting president; as TIME reported in March, that means that if Mueller finds any serious wrongdoing on the president’s part the agency will likely bring those findings to the House of Representatives, which would determine whether to begin impeachment proceedings.

That means that, at least until January of 2019, when there is the possibility Democrats could regain power in the chamber, Trump’s future rests in the Republican-controlled House, which will likely follow closely with how most Republican voters feel. Trump’s attacks, then, may help keep the grassroots by his side.

“As a purely legal matter this strategy appears to be counterproductive but as a political matter it could be quite effective,” said Stephen Binhak, a Miami attorney who also worked in Starr’s office during the Clinton Administration. “If Trump and his team can delegitimize the Mueller investigation enough, then if he refuses to testify, or even if Mueller presents evidence that the President was involved in a crime, the President may avoid the consequences.”

For now, the strategy appears to have had little effect on Mueller’s team, which has been working methodically but quietly on the investigation. As Giuliani was going on his media blitz, Mueller’s office filed a request for 70 blank subpoenas in the federal court that is overseeing the case of Trump’s former campaign chairman Paul Manafort, who was indicted last year for money laundering and conspiracy against the United States.

“I don’t think you pay too much attention. You keep your head down and you get the evidence you need,” said Peter Zeidenberg, who was deputy special counsel in the Scooter Libby case and worked with Mueller at the Justice Department. “The crazy things they’re doing that’s not something that you’re gonna focus on.”

In the end, said Binhak, its the evidence that really matters.

“In the face of conclusive evidence theres not much any criminal defense lawyer can do,” he explained. “Once President Clinton was faced with the evidence of the dress he was forced to admit to having a relationship with Monica Lewinsky.”

With reporting by Tessa Berenson 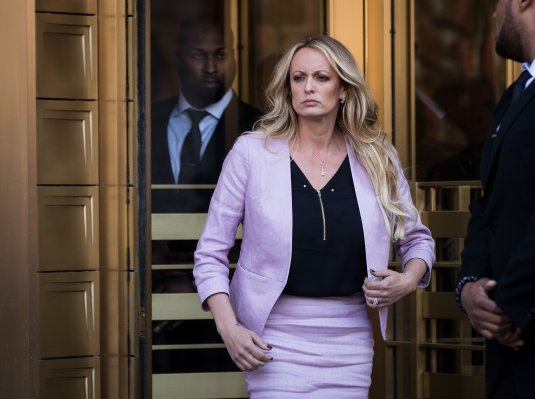 How the White House's Stormy Daniels Story Has Changed
Next Up: Editor's Pick