The House Chaplain, Father Patrick Conroy, speaks during a memorial service at the National Statuary Hall of the Capitol Sept. 27, 2017 in Washington, D.C.
Alex Wong—Getty Images
By Abigail Abrams

House Speaker Paul Ryan on Thursday reversed his decision about the chaplain of the House of Representatives and said Father Patrick Conroy would keep his job. The move came hours after Conroy sent a scathing letter to Ryan, in which the priest rescinded the resignation that Ryan forced him to give last month.

“This body is not well served by a protracted fight over such an important post,” Ryan said in a statement, according to the AP. The speaker added that he would meet with Conroy next week.

Earlier on Thursday, Conroy sent a two-page letter to Ryan that questioned the Speaker’s authority to fire him and the reasoning behind his ouster. The letter, which was first reported by the Washington Post, said Conroy had not been told of any problems with his performance and said that he would like to serve at least the remainder of his two-year term.

“I was elected as House Chaplain on May 25, 2011, and I have honorably served in that role since that time. I was re-elected House Chaplain in every succeeding Congress. I have never been disciplined, nor reprimanded, nor have I ever heard a complaint about my ministry during my time as House Chaplain,” Conroy wrote in the letter.

Conroy also said in the letter that Ryan never talked to him in person and instead sent his chief of staff, Jonathan Burks, to ask the chaplain for his resignation. The letter suggested that the motivations for his dismissal might have been more political than what Ryan has claimed.

The Speaker has said concerns about Conroy’s “pastoral services” were behind his decision. But when other members of the House learned that Conroy’s departure was not voluntary, the move created an uproar and Democrats signed a letter demanding answers from Ryan.

For his part, Conroy’s letter indicated his dismissal may have had to do with his Catholicism, and mentioned that Burks also brought up an opening prayer the priest gave last December as well as an interview with National Journal earlier this year. Conroy is just the second Catholic priest to serve as House chaplain, according to the Post. 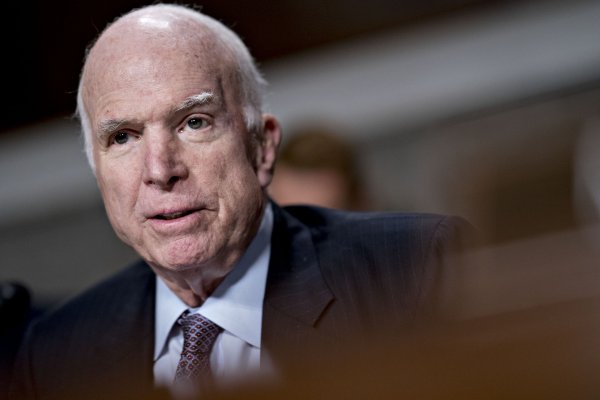 'I Hate to Leave.' John McCain Opens Up About His Brain Cancer Diagnosis and the Future of Politics
Next Up: Editor's Pick