To Nix or to Fix: Trump’s Major Dilemma on the Iran Deal

Diplomacy is subtle, atomic science complex. But the perceived villainy of Iran by the average American is the stuff of cartoons. At the time the nuclear deal with the Islamic Republic was signed by the U.S. and its five global partners in 2015, Gallup found 84% of the American public viewed Iran “unfavorably.”

The abiding antipathy the U.S. public feels toward Iran encouraged Donald Trump to attack the nuclear pact as a populist candidate. It also prompted Congress to give the U.S. President the levers to undo the deal, which lifted sanctions on Tehran in exchange for strict limits on its nuclear program. Skeptical lawmakers passed a law in 2015 requiring that any deal be “recertified” every 90 days by the President. On May 12, Trump gets his hand on those levers again–and he seems to be on the fence about whether to finish it off.

International observers say there’s no reason for Trump to vacillate. The International Atomic Energy Agency (IAEA), the U.N. body that conducts inspections, says Iran’s nuclear program has been taken down precisely as promised. An enterprise that in 2015 could have produced a nuclear warhead within months has largely been dismantled and is closely monitored. The U.S.–plus China, Russia, Germany, France, Britain and the E.U.–all have gotten what they asked for.

Trump wants more. His Administration argues that the deal is fatally flawed because it’s not permanent. After a decade, Iran would be allowed to resume enriching some uranium, and go back to basically business as usual after 15 years. “That’s not acceptable. [2025] is tomorrow,” Trump said at an April 30 press conference. But he added: “That doesn’t mean we won’t renegotiate a real agreement.” Secretary of State Mike Pompeo and National Security Adviser John Bolton, both hawks on Iran, have said the May 12 decision hinges on finding a credible way to do that.

One person intent on having his say is Israeli Prime Minister Benjamin Netanyahu, who took to the airwaves from Tel Aviv on April 30 to unveil what he described as an intelligence coup: 55,000 pages and 183 discs carried out of Tehran warehouses by Mossad agents. Netanyahu, who opposes the pact, described in detail what outside observers, including the IAEA, had known for years–that Iran had once pursued a nuclear weapon, dubbed Project Amad. Tehran failed to disclose this, but U.S. and other negotiators were more interested in what Iran would do in the future. But Netanyahu’s damning message (Iran lied, spelled out in giant letters) could provide the thin reed for a President in search of a premise for discarding the pact.

In fact, Netanyahu’s presentation had been quietly coordinated with the White House. “We had discussions with Israel about their rollout,” Sarah Huckabee Sanders told TIME the next day. Even so, some understood Netanyahu’s prop-heavy presentation to be a lobbying effort directed at a visually oriented–and undecided–President. “He spoke in English rather than Hebrew because he has an audience of one,” says David Makovsky, a scholar at the Washington Institute for Near East Policy.

Honoring the pact would burnish the President’s credibility in talks with North Korea, where credibility may be crucial: Kim Jong Un has signaled he will “denuclearize” if the U.S. promises not to invade. But French President Emmanuel Macron says Trump is not afraid of risking a second showdown: “His experience with North Korea is that when you are very tough, you make the other side move and you can try to go to a good deal or a better deal,” Macron said on April 25, after a White House visit.

“That’s a strategy of increasing tension. It could be useful.”

Iran, for its part, says the pact is not open for renegotiation, and that it will walk away from it if Trump does. “We need to expect a change in the country’s situation,” said Mohammad Bagher Nobakht, a spokesman for President Hassan Rouhani on May 2. Iran’s leaders are ambiguous about whether they would resume a weapons program in the event of the deal’s collapse, raising fears about U.S. airstrikes and a regional arms race. Saudi Arabia has vowed to build nukes if Iran does. But Iranian political analysts say undoing the nuclear deal will almost certainly be a boon to the hard-line conservatives who opposed it all along. Rouhani, a moderate, has no choice but to brace for impact. “We are ready for a change in the situation,” Nobakht said, “and the necessary policies and funds for the days different from today have been prepared.” Anyone holding out hope for a more favorable perception of Iran in the U.S. should prepare to be disappointed. The only thing simple about Iran is how Americans feel about it. 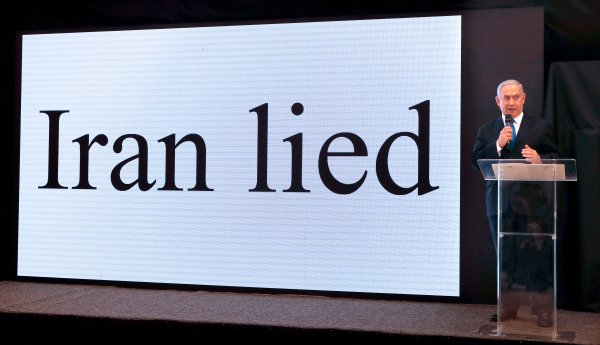 Benjamin Netanyahu's Iran Deal Speech Might Have Convinced the Only Person Who Matters
Next Up: Editor's Pick