Hawaii state lawmakers passed a bill this week that would ban the sale of sunscreen containing chemicals that are harmful to coral reefs, one of the state’s top tourist attractions.

The bill prohibits the sale of sunscreen containing two chemicals, oxybenzone and octinoxate, that its authors say “have significant harmful impacts on Hawaii’s marine environment and residing ecosystems, including coral reefs.”

The measure passed both houses of the state legislature Tuesday, and now awaits the signature of Gov. David Ige. The ban, the first of its kind in the U.S., would go into effect in 2021.

The ban is “a first step to help our reef and protect it from deterioration,” said Hawaii State Sen. Donna Mercado Kim, one of the bill’s sponsors, according to the Associated Press. “Hopefully, other jurisdictions will look at this legislation and follow suit.”

Read more: How Sunscreen May Be Destroying Coral Reefs

Scientists have argued that oxybenzone and octinoxate accelerate coral bleaching and prevent reefs from regenerating, making them less resilient to climate change. According to the bill, HI SB2571, scientific studies show that the chemicals also threaten fish populations.

Elevated levels of the toxic chemicals have been found near coral reefs at popular swimming beaches in Hawaii, including Waikiki beach on Oahu and a nature reserve in Maui, according to lawmakers.

If enacted, the new law will require a doctor’s prescription to purchase sunscreens containing the hazardous chemicals. However, online purchases do not appear to be prohibited, and consumers may still be allowed to enter the state with the banned items. 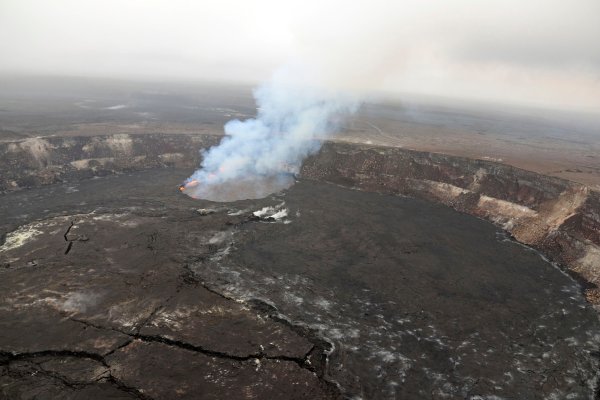 Officials Warn of Possible Eruption at Hawaii Volcano
Next Up: Editor's Pick