Dozens of earthquakes shook Hawaii’s Kilauea Volcano Wednesday, as scientists warned of a possible eruption following the collapse of the crater floor at the Puu Oo vent.

“An eruption is possible because magma is clearly moving through the East Rift Zone and it could come to the surface. The possibility is definitely there, I can’t give you a probability,” U.S. Geological Survey geologist Janet Babb told the Associated Press.

The USGS Hawaiian Volcano Observatory reported a “high rate” of earthquakes in the area of the rift zone Wednesday. As the magma continues to flow underground, the observatory warned that an outbreak of lava — which is magma that reaches Earth’s surface — was possible.

The Hawaii County Civil Defense advised residents in certain areas to prepare an emergency plan in case an evacuation becomes necessary. Hawaii County Mayor Harry Kim said county, state and federal agencies were preparing for a possible eruption, identifying shelters, mobilizing police and road crews, and warning residents in the lower area of the district of Puna to prepare to evacuate.

“Should an eruption occur, residents along the East Rift Zone may have little warning. Residents in that area should be prepared to evacuate,” Civil Defense Administrator Talmadge Magno said in a statement. 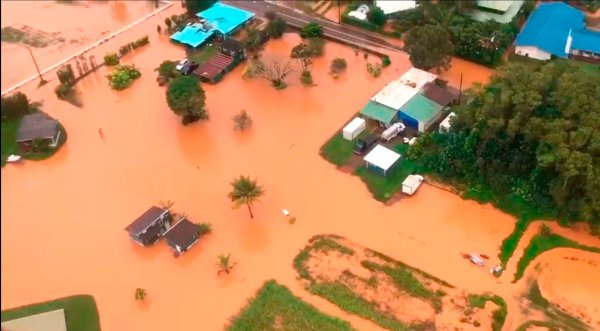 Hundreds Evacuated in Hawaii Amid Flooding
Next Up: Editor's Pick