Michael Brun didn’t plan on becoming a DJ. He intended to become a pediatrician and give back to his native Haiti as a doctor. But fate showed Brun a very different way of giving back: by promoting the local Haitian music scene to the world through his exuberant dance tracks.

Brun, who was born and raised in Port-au-Prince, grew up playing instruments. But it wasn’t until he found electronic music as a teen that something clicked, and he discovered a knack for producing his own tracks. Still, it was always just a hobby on the side. Haiti didn’t have much of an electronic music community, although he was able to seek it out online.

“I realized that’s what made electronic music special — it was a truly international culture. There were no barriers of language or ethnicity,” he tells TIME. Brun ended up being one of the first electronic music artists in Haiti, snagging gigs as an opening act for major visiting artists like Avicii.

But as his hobby was taking off, Brun’s education was picking up, too: he attended a military high school in Indiana on a scholarship and college as a premed student. At the same time, big-name DJs like Dirty South and Hardwell were reaching out. His played his first music festival at 19 to a crowd of 10,000. Suddenly, music seemed like a viable career path. So he dropped out of college and started playing major events like Coachella and Electric Daisy Carnival and releasing remixes that picked up millions of plays.

A few years in, he took a step back to reevaluate his place in music. He returned to Haiti, launched an independent music label and started working with local artists and arts organizations. “It felt like I needed to go home to go further,” he explains. “I was trying to figure out how to stick to the core idea of helping people. How do I put that into my artist career in a way that’s not tacked on? I wanted it to be really a huge part of the music itself.”

Now, Brun has embarked on a new project: collaborating with artists from around the world and bringing Haitian sounds into the mainstream as a cultural ambassador for his island home. Just last week he released his latest, “Positivo” with Latin megastar J Balvin, and announced a North American tour inspired by Haitian street parties and featuring fellow Haitian acts. Brun sat down with TIME to reflect on his path in music, his responsibility as a Haitian representative on the world stage and what it means to thoughtfully exchange — and not appropriate — music from different cultures.

TIME: How did your more recent musical evolution happen? What kicked things off after you returned to Haiti?

Michael Brun: I was learning more about how preserving and understanding culture allows a community to control their narrative. I got in touch with an artist institute in the south of the country that’s fully scholarship-based. I went to visit and thought it was really cool they were developing the arts. [Our work together] became the song “Wherever I Go.” Because we did it with students and because I’m independent, the money from the song could go back to the scholarship fund of the school to support future artists, future leaders of the country.

When I put it out, I happened to be in Times Square, so I took a photo of myself with the Haitian flag. A woman walking by laughed at me, because I don’t look traditionally Haitian; I’m mixed. In Creole, she was like, ‘What are you doing?’ And I answered her in Creole. She freaked out, and we both laughed. In that moment, she felt at home. I posted that story on Facebook and it happened to go viral. It was the first Haitian song I’d ever done. It got viewed by a million people in 24 hours, and the video really caught on and became a hit in Haiti.

Yeah! The way you know you have a hit in Haiti is you can’t escape it. You hear it in the supermarket, on motorcycles, at barbershops. I realized it was a hit when I visited the Citadel in Haiti with my family and I heard it in the distance on a motorcycle. That whole experience working with the students, figuring out how to incorporate pride of my country and identity, explain how my Haitian culture has allowed me to do what I’m doing — I always hoped that that would help others be proud of where they’re from, and to see there’s no limit to what they can accomplish if you know your roots.

That song is a mix of EDM plus pop plus Haitian sounds. Can you describe what Haitian music is and what you draw from?

Haitian music spans many genres. The more traditional classic ones are compas — that genre is zouk, like Caribbean music, but really romantic dance music, a slower tempo that’s very popular around the Caribbean and Haiti. Then there’s carnival music. And there’s rara music, which is a traditional African-Haitian mixture, very raw — horns, drums — it’s like parade music.

I didn’t just want to take a few sounds and drop it into something. I wanted it to come from a point of view of studying what the great artists before had done, the messages they were trying to tell, and what’s the importance of this drum rhythm or this horn in the scope of Haitian culture and history. The rara music represented to me the rawness of Haiti. Those rhythms actually came from different parts of the country and different parts of Africa. The instrumentation is raw because it’s like from the earth — a goatskin drum, or a horn made out of a sheet of metal. It was just what was around you, but playing these ancient rhythms. I thought it was so cool that it’s almost this untapped sound that people preserved like a book, so future generations could somehow feel connected to their ancestors.

So now you’re working on this progressive project releasing a song a month or so, incorporating those traditionally Haitian sounds.

When I did “Wherever I Go,” I felt like something clicked, that that combination of sounds made sense. One foot was in Haitian music, one foot was in international sound — and I do think there’s an international sound, whether you hear it in reggaeton, Afrobeat, even in pop music now, this shared vibe that everybody is connecting with. That made me realize something’s changing now.

When you see songs like “Mi Gente” or “Despacito,” or Portuguese like “Bum Bum Tam Tam,” it’s almost like indigenous music taking root around the world. It made me aware that Haitian music shares so many similarities with everything else going on. Yes, there’s a traditional aspect that’s very local, but there’s also an aspect that’s international. My goal is to figure out how to see it as just a hit song, versus a song from Haiti.

And to not get pigeonholed into being part of a “world music” genre.

Exactly. As I’ve been working on this project and making these songs, the core of it is raw. I record a lot on my phone, on the street — claps, horns, yells, different rhythms. I’m trying to capture that feeling in the moment. I’ve realized that the sound of the street in Haiti is not that different from the sound of the street in Colombia, or Benin, or Paris or the U.S. These artists that I’m working with get that. I hope the message people get from it is that there is a universal sound now. And it’s OK to do something in a different language. Don’t be scared of that.

There is some backlash against DJs for appropriating sounds. How do you think music creators can be better at keeping in mind the history and traditions of sounds you’re incorporating?

That concept of exchanging versus taking is key. You can’t just take stuff. You’re hurting the people you’re taking from and you’re hurting yourself, because you’re missing out on the richness of the sounds and the story behind it. The way I’ve been trying to approach this is, if I’m working with an artist from another country, I’m not just working with them, I’m trying to get the whole concept of their culture, why they do what they do, their motivations into the music itself. Preserving your history and understanding your place in the scope of your country and the scope of a sound allows you to do so much more. And you make a better product in the end.

It sounds like you position yourself as an ambassador for Haiti. You’ve also not been afraid to share political statements on social media. How do you think of yourself as a representative of Haiti?

People have always said bad things about my country. I feel it’s a personal responsibility, as someone who people listen to or look to for what Haiti represents, to help Haitians be proud of where they’re from. Haiti is iconic in the western hemisphere as the second independent country after the U.S. in 1804. It’s the first black republic in the western hemisphere that won independence from colonial rule through a slave rebellion. Haiti helped in the revolutions of many other countries over the course of the last 200 years. It’s very important for people to know that, because once you place the achievements on a timeline, you understand the significance of the country. That’s been lost because of images of poverty, images of corruption, images of lack of education.

Think about a little kid in Haiti only listening to the news, watching TV, seeing that their country is a “piece of s–t.” How do you have any worth if that’s what you’re seeing and hearing? You’re continuing this cycle of negativity and lack of value. In my life I’ve been able to achieve because I had positive reinforcement, I had a good education. That’s why I’ve been so involved in education: I believe it empowers you, regardless of what you decide to do. I ended up dropping out and becoming an artist, but my education is with me my entire life. It’s not about being political, it’s about letting people know that your value is linked to how you talk about yourself, the way that people talk about you.

That’s why I’m so adamant on having pride in the country, despite having issues. Issues can be fixed. But if you lose who you are, it’s a whole other problem, and I won’t let that happen. 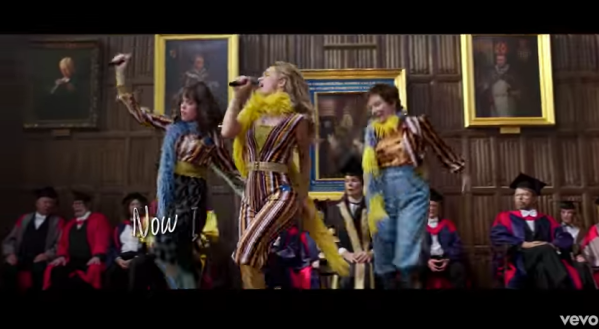 Here's the First ABBA Song from the New 'Mamma Mia!' Movie
Next Up: Editor's Pick