After last year’s popcorn season recorded the worst box office in more than a decade — despite a number of critically lauded blockbusters — there’s hope yet that the 2018 summer movie season can mount something of a comeback. And this year, there are summer movies for everyone. You want Tom Cruise jumping out of an airplane? You got it. An Oceans movie but minus the testosterone? There’s that, too. A chance to relive your awkward youth and the horrors of middle school? Those masochists will be served, as well.

In this thriller dropping just in time for Mother’s Day, Gabrielle Union shows that a mother’s love knows no bounds — and sometimes extends to some pretty impressive martial arts moves — when her kids’ lives are threatened by shady criminals.

Melissa McCarthy stars in a comedy she co-wrote with her husband, director Ben Falcone, about a divorcée who goes back to college alongside her daughter — who’s not particularly thrilled about the opportunity for mother-daughter bonding over beer pong.

The book club of your dreams — Jane Fonda, Diane Keaton, Mary Steenburgen and Candice Bergen — takes on the Fifty Shades trilogy, but also sex after 60, online dating, overprotective adult children, ex-husbands who remarry women the age of their adult children and more.

Ryan Reynolds’ “merc with a mouth” returns with another double dose of snide adolescent humor, this time facing off against Josh Brolin’s time-traveling mutant, Cable, who’s trying to take down a young mutant (played by Hunt for the Wilderpeople‘s talented New Zealand actor Julian Dennison).

In this drama from Paul Schrader (best known for writing Taxi Driver and Raging Bull), Ethan Hawke is quietly moving as a pastor whose life becomes enmeshed with the lives of a young couple (Amanda Seyfried and Philip Ettinger) in his congregation.

Saoirse Ronan and Billy Howle anchor this Ian McEwan adaptation, a 1960s period drama, about the fraught wedding night of a pair of newlyweds in an English seaside town.

German filmmaker Wim Wenders convinced the normally press-averse Holy Father to sit for a series of interviews in a documentary that weaves together his candid observations about social justice, poverty and death.

In this prequel set before Han Solo’s first encounters with Luke and Leia, Alden Ehrenreich plays the strapping young pilot as he meets Chewbacca and Lando Calrissian (Donald Glover) and faces a new foe in Paul Bettany’s gangster, Dryden Vos.

In a drama from Silas Howard, a director of Transparent, Claire Danes and Jim Parsons balance angst and compassion as Brooklynites struggling to help their gender-nonconforming child find a place in the world while still just being a kid.

In this true story of survival adapted from a memoir by Tami Oldham Ashcraft, Shailene Woodley and Sam Claflin are lovers lost at sea as ominous clouds move in.

This unconventional crime film, starring standout Barry Keoghan (Dunkirk, The Killing of a Sacred Deer), dramatizes the true story of four young men who attempted to pull off a rare-books heist from a Kentucky university in 2004.

The latest from writer-director Brett Haley — who has won a following with heartfelt indies like The Hero and I’ll See You in My Dreams — sees Nick Offerman as a wistful dad who starts a band with his talented but reluctant daughter (Kiersey Clemons) in a last-minute attempt at bonding before she heads off to college.

In a Sundance horror hit that’s been compared to The Exorcist, a family (led by a terrifyingly effective Toni Collette) unravels after the death of a matriarch reveals dark secrets long hidden in a dusty attic.

Move over, George Clooney, and move over, Rat Pack: the newest installment of the Oceans franchise features the summer’s most star-studded cast. Cate Blanchett, Sandra Bullock and Rihanna are just three-eighths of the gang in this new take on the heist caper.

MORE: Could Ocean’s 8 Mark the Return of the Great Glam Caper?

This heartwarming documentary, all but guaranteed to elicit tears from anyone who’s ever watched Mister Rogers’ Neighborhood, goes behind the life and career of beloved entertainer-educator Fred Rogers.

This comedy, based on a true story recounted in a 2013 Wall Street Journal article, stars Ed Helms, Jeremy Renner, Jon Hamm and Jake Johnson as old friends engaged in an epic, cross-country game of the titular schoolyard game.

Paul Rudd stars in this historical drama about real-life ballplayer Moe Berg, a brainy backup catcher in the major leagues, who left the plate to spy on the Germans during World War II.

Jurassic World still sits pretty at the number four global box office of all time — so of course they made another one. In this next installment, Chris Pratt and Bryce Dallas Howard try to save the dinos from an impending volcanic eruption by moving them closer to civilization, and a big, bad hybrid T. Rex escapes.

Under the Silver Lake (June 22)

Writer-director David Robert Mitchell follows up his 2014 indie horror hit It Follows with this drama about a man (Andrew Garfield) who becomes obsessed with solving a murder and kidnapping that happen close to home.

Josh Brolin and Benicio del Toro return (minus Emily Blunt) for a sequel to the 2015 crime thriller. This one is also centered around the drug war at the U.S.-Mexico border, but it ventures further afield to tell a more international tale.

This documentary tells the story of identical triplets separated at birth who reunite as young men. That story alone would have been enough for a compelling film, but where it goes next — which is best left unspoiled — makes for the real drama.

NBA star Kyrie Irving first showed his acting chops in a series of Pepsi Max ads about an elderly streetball legend. Now the character gets his own feature-length comedy with assists from fellow players Shaquille O’Neal and Reggie Miller and Get Out star Lil Rel Howery.

Jessica Chastain plays real-life artist Catherine Weldon, who travels from New York to North Dakota in the 1890s to paint a portrait of Sitting Bull (Michael Greyeyes). Before long, she’s caught up in the Lakota people’s fight for the right to their land.

The prequel to the successful Purge series sees Marisa Tomei as a sociologist who develops a social experiment allowing Americans to commit any crime for one day, but it’s quickly revealed to be a cover for a government plot to wipe out black communities.

Paul Rudd returns as the variably-sized superhero, this time teaming up with Evangeline Lilly’s Wasp for a new mission as he balances saving the world with his home life.

Sorry to Bother You (July 6)

Oakland activist and musician Boots Riley makes his directorial debut with this genre-defying sci-fi fantasy comedy about a telemarketer (Lakeith Stanfield) who must decide whether to make the big bucks selling sinister merchandise or joining in his coworkers’ struggle to form a union.

Oscar-winning director Kevin Macdonald (The Last King of Scotland) takes on the life of Whitney Houston, who died at 48 in 2012, in this authorized documentary featuring unreleased recordings and interviews with family members.

Comedian Bo Burnham’s directorial debut, a Sundance sensation, stars breakout Elsie Fisher as an Instagram-addicted middle schooler just trying to fit in. The film is a tender and empathetic story about the awkwardness of adolescence in the age of social media — and always.

Joaquin Phoenix plays real-life quadriplegic cartoonist John Callahan as he works his way through the 12 steps of Alcoholics Anonymous, adjusts to life in a wheelchair and hones his offbeat style and politically incorrect sensibility as an artist.

Boardwalk Empire star Kelly Macdonald gets a leading role in this indie drama, an English-language remake of an Argentine movie about a put-upon mother and housewife whose midlife revelation is that she’s a prodigy at — you guessed it — competitive jigsaw puzzling.

Fresh off of trying to save Chicago from overgrown zoo animals in Rampage, Dwayne Johnson’s next trick will be to save Hong Kong, or at least the residents of the world’s tallest building (including his family) from terrorists, a raging fire and a host of other threats.

Denzel Washington returns for the sequel to the 2014 crime thriller about a retired CIA operative who fights a bunch of Russian gangsters.

Hamilton‘s Daveed Diggs and spoken-word poet Rafael Casal, both Oakland natives, co-wrote and star in this drama about two best friends in that California city, one black and one white, who are forced to confront the ways in which race and privilege have influenced their relationship.

It’s a big moment for ABBA: they just announced their first new music in 35 years and they’re getting another movie built around their music. In the sequel, we see Meryl Streep’s matriarch in flashbacks (played by Lily James) meeting her many suitors, and Cher shows up as the uber-matriarch.

The sixth installment of the Tom Cruise spy-thriller franchise sees the stunt king at odds with the CIA and in the crosshairs of foes and former friends. (Never mind what it’s about — Cruise literally jumped out of a plane at 30,000 feet during filming.)

Kung Fu Panda 2 and 3 director Jennifer Yuh Nelson — the first woman to solo-direct a major Hollywood animated feature — takes the helm of her first live-action film, based on a young adult novel about teens (led by Amandla Stenberg) with special powers escaping tyrannical government forces in the aftermath of a plague.

Ewan McGregor plays author A.A. Milne’s son, who in growing up has lost his sense of wonder and needs some help from a CGI Pooh bear (and friends) to find it again.

In this emotional thriller, Star Trek actor John Cho plays a widowed father searching for his missing teenage daughter by diving deep into her web history.

Mila Kunis and Kate McKinnon play best friends who accidentally become international spies. They fumble their way across Europe when Kunis’ character learns that her now-missing ex-boyfriend (Justin Theroux) is in the CIA.

In this adaptation of Meg Wolitzer’s 2003 novel, Glenn Close simmers with years of pent-up grievances as the wife of a novelist (Jonathan Pryce) just awarded the Nobel Prize.

Spike Lee directs the true story of Ron Stallworth, an African-American police officer who infiltrated the Colorado Springs chapter of the Ku Klux Klan in 1979.

Jason Statham plays a deep-sea diver and ex-military man stuck on an underwater research facility when a megalodon, a 75-ft. prehistoric species of shark, attacks. Think Jaws, but underwater, and three times the shark.

The first book in Kevin Kwan’s bestselling trilogy, in which an economics professor (Constance Wu) learns that her boyfriend (Henry Golding) is the most eligible bachelor in Singapore, gets the big-screen treatment. It’s the first major film in a quarter of a century with an all-Asian cast.

In a mature rom-com adapted from a Nick Hornby novel, a woman (Rose Byrne) bonds with the obscure musician (Ethan Hawke) with whom her boyfriend (Chris O’Dowd) is obsessed.

A purveyor of books (Emily Mortimer) agitates a buttoned-up town with her controversial taste in literature (think Nabokov and Ray Bradbury) in this adaptation of Penelope Fitzgerald’s 1978 novel.

Two brothers, one an ex-con and one still a child, go on the run from a dangerous criminal, protecting themselves with a mysterious, futuristic-looking weapon. 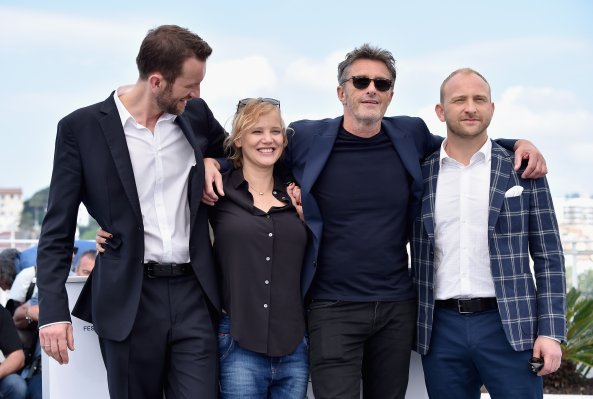 Cannes Review: Cold War Is a Terrific Romantic Drama That Burns Clean
Next Up: Editor's Pick