The Real Lesson of Kanye West's Take on Slavery, According to an Expert

Kanye West’s increasingly political presence on Twitter has left historians and political scientists to set the record straight on several recent occasions. And while experts gave him partial credit for his tweets about the history of American political parties’ records on race — in which he got his 19th century information pretty much right, but skipped over significant later changes — West went viral on Wednesday for sharing a take on the history of slavery that left many people outraged.

“When you hear about slavery for 400 years. For 400 years?! That sounds like a choice,” he told TMZ in an interview published on Tuesday.

In a series of later-deleted tweets, he attempted to clarify his statements. “Of course I know that slaves did not get shackled and put on a boat by free will,” he wrote. “My point is for us to have stayed in that position even though the numbers were on our side means that we were mentally enslaved.” (In subsequent tweets, he also added that he thought the Nat Turner movie Birth of a Nation was hampered by its telling the story of enslaved people fighting back rather than accepting their place, and shared a fake Harriet Tubman quote.)

Ironically, considering his clarified point about the enslaved not fighting back, Kanye West’s version “completely ignores the history of thousands of slaves who fled from slavery and rebelled against it,” says Manisha Sinha, author of The Slave’s Cause: A History of Abolition.

Sinha’s scholarship looks at how fugitive slaves and other people of color played an active role in the end of slavery. In the uproar over Kanye West’s tweets, she sees a lesson about a crucial but often overlooked part of that history — and a reminder that not only was slavery not a choice, but also, in fact, the enslaved made every effort to get out of it.

“Enslaved people fled for freedom whenever they got the opportunity,” she says. “When they did not have the right to vote, they voted with their feet.”

Nat Turner and Harriet Tubman, to whom West compared himself, may remain two of the most famous examples of resistance among the enslaved, but they are part of a massive story that covers the whole history of slavery. For example, the shackles in which the enslaved made the Middle Passage journey are proof that physical restraints were seen as needed, she says, and when the Civil War began thousands of enslaved people ran to the Union Army. In fact, how to deal with the growing number of runaway slaves was one of the key political battles that led to the Civil War.

“Southern states wanted to enforce federal fugitive slave laws, and northern states resisted it,” she explains. “Northern states even passed personal liberty laws to protect some of these slaves who were coming into the North. When their masters took them to free territory and free states, slaves sued their masters for their freedom. They used the law, even when they did not have the right to vote.” Most famously, Dred Scott tried and failed to sue his master’s family for freedom on the basis that they had once lived in free territory.

A look at what slaves wrote and sang during that period also shows that they were the opposite of “mentally enslaved.”

But, though many did flee, more were not able to. The record shows that the most common runaways were young men without wives or children, but slavery affected the whole family and it was difficult to run with young children in tow. In addition, those in the Deep South had a longer trek than those who lived around the border of free and slave territories. So, those who couldn’t escape engaged in other forms of resistance on a regular basis, such as work stoppages, slow-downs, secret meetings or feeding runaways, as Vanessa M. Holden, an assistant professor of history at the University of Kentucky, has explained to TIME previously.

And, Sinha adds, it’s important to remember that despite the existence of areas where the enslaved outnumbered slave owners, the demographics of the United States were not the same as a place like Haiti, which remains the rare example of a successful slave revolt. African-Americans were an unarmed minority facing an armed majority.

“In the American South, the extraordinary achievement of African-Americans has been surviving slavery and being able to resist it and developing alternative sources of self-worth,” Sinha says. “I think Kanye should learn that history and be humbled by it.”

But his words also raise a question about what it means to remember the past. In West’s recent interview with Charlamagne Tha God, he posed the question, “Why you gotta keep reminding us about slavery?” and suggested that a figure like Michael Jordan would be a better fit for a new $20 bill than Harriet Tubman. Sinha says that there’s a point to be made about changing the way slavery is used to influence modern discussions—but that she thinks there’s a better way to do it.

“To get rid of things that remind us of slavery,” she argues, “we should get rid of all of the Confederate monuments and statues of men and women who fought for slavery.” 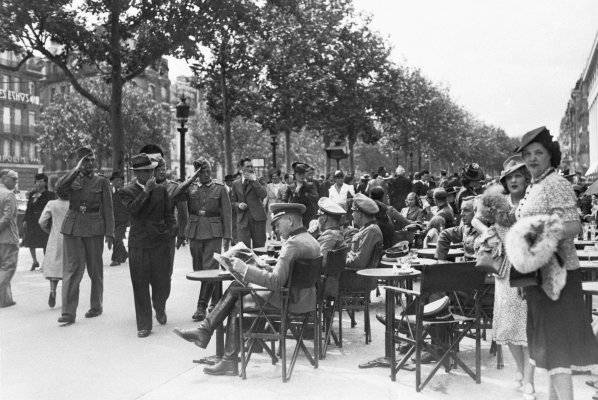 A Jewish Writer Kept a Secret Diary During the Nazi Occupation of France. It Offers an Important Lesson About History
Next Up: Editor's Pick