In a meeting with journalists whose industry has been disrupted by his company, Facebook CEO Mark Zuckerberg said Tuesday he was focusing on ways to support the investigative work they do.

“I view our responsibility in news as two things: Make sure people can get trustworthy news in our platform and that we’re doing our job to help build a sense of common ground in society,” Zuckerberg told a small gathering of editors and news executives. “We also view ourselves of having a responsibility to support the institution of journalism…. Making it so that more journalists can be funded and have jobs and do investigative work.”

Zuckerberg also said that Facebook has begun using surveys of users about publications’ trustworthiness in order to determine how to best serve that content within its news feed.

“What I’ve seen is that it lines up with what you expect it to be,” Zuckerberg told the second annual “Off the Record” conference, organized by leaders from The Information, Quartz and BuzzFeed.

Zuckerberg said his company plans to spend billions of dollars on artificial intelligence and hiring 20,000 people to help root out content like hate speech and foreign inference in elections. The latter plagued the social media giant during the 2016 U.S. presidential election and drew Zuckerberg to Capital Hill for two days of testimony earlier this month.

Speaking against claims that social networks like Facebook increase polarization among voters, Zuckerberg said that he believed that readers’ of Facebook’s news feed are likelier to confront views that are different than their own than consumers of any one news organization.

“The average person on Facebook, 23 percent of their friends have a different political ideology than they do,” Zuckerberg said. “Your news feed is likelier to have a greater diversity of opinion than any one news channel.”

When asked whether Facebook or Zuckerberg himself would invest in non-profit efforts supporting the investigative journalism that he said he values, Zuckerberg said he preferred that media companies find sustainable models of their own.

“I do think that helping this be sustainable is the most important thing to do,” Zuckerberg said. 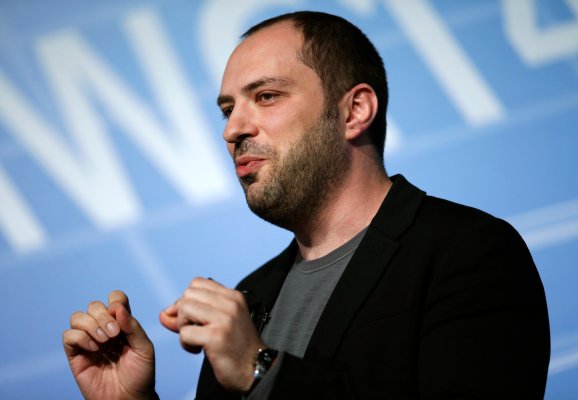 WhatsApp's CEO Is Suddenly Leaving Facebook. It Could Cost Him $1 Billion
Next Up: Editor's Pick