At first glance, this lower-middle class neighborhood is a standard Texan suburban enclave: residents grill chicken on their front patios while their children shoot hoops in the driveways; spoiled pet chihuahuas nap under the parked Jeeps on the curb to keep out of the withering heat. But for the past several years, its backyards have been intersected by a stark twenty-foot-high steel fence, something not too far off from what the president has pledged to build along the border with Mexico.

Residents have learned to live with it. When the trucks and helicopters of the Border Patrol descend on the neighborhood to capture immigrants who have made it over the fence, most just shut their doors and carry on with their business.

“You’d be amazed how people climb it,” one middle-aged woman, who gave her name only as Maria, said on a recent Monday afternoon, as offhandedly as if she were commenting on the weather. “There’s always cars waiting for them right across the street. But everybody here minds their own business. Like I tell my daughter: I don’t care what anyone does as long as they don’t bother me.”

This is life in the southernmost neighborhoods of Brownsville, Texas, a dusty city of 180,000 that sits at the state’s bottom tip along the federal border. The backyards here are as little as eight hundred feet from Mexican soil, separated from it by only the muddy waters of the Rio Grande and the looming steel fence. A backyard affords little privacy: on the other side of this fence, which is vaguely dystopian in its monotony, Border Patrol officers cruise by in their white trucks, surveilling the river’s banks for immigrants attempting to cross the border.

To live in a neighborhood like La Lomita is to have a front-row seat to one of the most contentious issues in U.S. politics today. Everyone has a story. Residents describe looking out to their backyard in the morning to see the remains of T-shirts snagged atop the steel bars of the fence. One woman recalls coming inside from hanging the laundry to find her toddler-aged son watching TV with a woman in her thirties with muddied bare feet sitting on the couch. La Lomitans are used at this point to getting knocks on the door from Border Patrol officers attempting to track down individuals who made it over the wall successfully.

“Sometimes I’ll see the migrants go in one direction but I’ll point the officer in another,” Celeste Rios, a kindly-faced woman who works in a Motel 6 in Brownsville, says. “If they’re coming with a good mentality — I just feel so bad. Another time I let one hide in my garage. He was like my son, who is 22, and he seemed so scared and fragile — it just broke my heart. I let him hide there, and then I watched as he left and the Patrol immediately picked him up.”

On the whole, the attitude towards the fence itself is one of deep ambivalence. Those who have been here for awhile remember with palpable frustration what it was like to receive a letter from the Department of Homeland Security 10 years ago informing them that their yards — many of which stretched all the way to the banks of the Rio Grande — would be sequestered for the construction of a barrier intended to fortify border security. In 2006, Congress had overwhelmingly passed the Secure Fences Act, which authorized the erection of this barrier along the 1,954-mile border with Mexico. (As of last year, barriers have been built along less than 700 miles of it, according to the New York Times.) Some say they were inadequately compensated for the seizure of their land; others resent the upheaval of their routines.

“I hate it,” 35-year-old Rose Camacho, who grew up in the house on Jo Ann Street in La Lomita where she still lives, tells TIME. “Before we had this fence, I was able to go walk on the border towards the river, and I have very nice childhood memories of that. I’d go collect rocks, I’d be able to see the birds and foxes. That’s gone.”

And there are those who appreciate the security offered by the fence, since increased surveillance has dissuaded cartel-related border traffic in the area. But even these residents seem to agree that at a certain point, building more barriers isn’t going to do much to slow down the immigrants seeking to cross the border.

“They put it up, and people are still crossing over,” Camacho says. “Just a year ago, a pregnant lady had to be taken to the hospital because she climbed over the fence and fell on her head. I don’t think it’s helping at all.”

Accordingly, many people here scoff at the enthusiasm among conservatives for Trump’s proposed border wall. “Listen, I’m all for security,” 42-year-old Daniel Lopez, who lives on a cul-de-sac that abuts the fence, says. “I’m a gun owner — a big Second Amendment guy, former law enforcement in Dallas. And I’m personally against it, just because I don’t think it’ll do much. The demand for what’s coming from over there is so strong and lucrative that it’s going to keep coming, above ground or underground.”

Tighter border security has done little to deter those attempting to cross into the U.S. Attempted border crossings slowed during the first few months of the Trump Administration amid harsher rhetoric about a crackdown, but in March they appeared to rebound slightly closer to Obama-era levels.

“I think some sort of border security is a good thing — some sort,” Rose Camacho says. “But I feel like anyone who wants to cross will find a way. They’ll dig tunnels underneath the wall. If they want to cross over, they’ll find a way.” 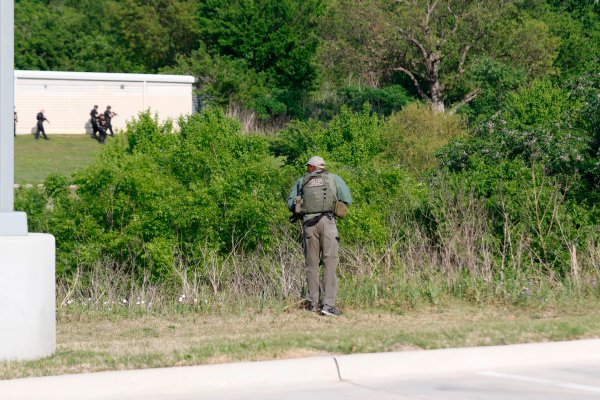