After saying their vows inside of St. George’s Chapel on Saturday, Prince Harry and Meghan Markle sealed their union with the royal wedding first kiss.

Following the service, the newly-appointed Duke and Duchess of Sussex appeared before the crowd gathered at Windsor Castle—as well as the millions of royals fans watching around the world—to share a smooch as husband and wife.

The romantic scene was reminiscent of the royal wedding kiss shared seven years ago by Prince William and Kate Middleton on the balcony of Buckingham Palace following their 2011 nuptials at Westminster Abbey. And just like that kiss, Harry and Meghan’s peck was one to remember.

Catherine, Duchess of Cambridge, and Prince William, Duke of Cambridge, kiss on the balcony at Buckingham Palace following their wedding at Westminster Abbey on April 29, 2011 in London, England.
Mark Cuthbert—UK Press via Getty Images

The crowd could be heard cheering in earnest as the smiling newlyweds leaned toward each other, creating a picture-perfect snapshot of the fairytale day. 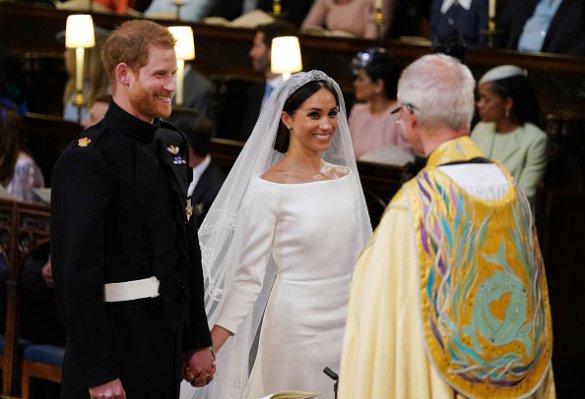 Here's What Prince Harry Said to Meghan Markle the Moment She Arrived at the Altar
Next Up: Editor's Pick