The Migrant Caravan That President Trump Complained About Was Stopped at the U.S. Border

A caravan of migrants, mostly from Central America, arrived at the U.S.-Mexico border on Sunday, but were not granted entry due to a lack of space, according to U.S. officials.

U.S. Customs and Border Protection Commissioner Kevin McAleenan said in a statement that the San Ysidro port of entry is currently at capacity and therefore officers are unable to process migrants who lack documentation.

“As sufficient space and resources become available, CBP officers will be able to take additional individuals into the port for processing,” the statement reads. “CBP will communicate with Mexican authorities for operational awareness on this issue of capacity within CBP facilities as appropriate.”

For weeks, a group of migrants has traveled up through Mexico and toward the U.S. border, led by the humanitarian aid group Pueblos Sin Fronteras. At its peak, the caravan was made up of over 1,200 people, most were from Honduras and were fleeing violence and political unrest, according to BuzzFeed News. The trek has been billed as refugee caravan and many on the migrants have told news outlets they hope to seek asylum in the U.S.

But they are not likely to be welcomed with open arms by federal officials. Reports of the caravan sparked outrage from President Donald Trump, who unleashed a flurry of tweets denouncing the travelers and calling on the Mexican government to intervene before they reached the U.S.

“We need a wall, number one,” Trump said on Monday, noting that National Guard troops had also been deployed in the border states. “We need a change in the law.”

Homeland Security Secretary Kirstjen Nielsen has continued to urge the travelers to seek asylum elsewhere.“Individuals of the ‘caravan’ seeking asylum or other similar claims should seek protections in the first safe country they enter, including Mexico,” Nielsen said in a statement last week.

She also warned migrants that entering illegally and making a “false immigration claim” is against the law.

But many of the migrants traveling are undeterred and dozens continued on the journey that ended at the U.S.-Mexico border on Sunday. According to several news outlets, despite being told they would not be granted entry many in the group slept near the border processing center and vowed to remain until they are let in. 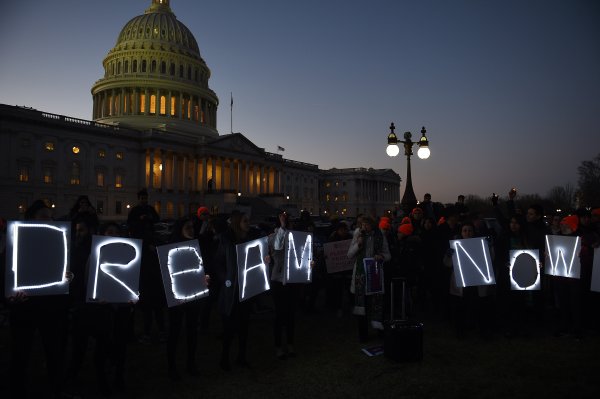 These Koch-Backed Groups Are Pressuring Congress to Act on Dreamers
Next Up: Editor's Pick