‘Like the Pope Abandoning Jesus.’ Why North Korean Denuclearization Is Still a Long Shot

It’s official: North Korea is moving into the future. On Sunday, the Kim Jong Un regime announced it would shift its clocks forward 30 minutes next weekend to unify with South Korean time — one of several conciliatory gestures decided at Friday’s historic talks between Kim and South Korean President Moon Jae-in.

Following a meeting oozing with fraternal symbolism at the riven peninsula’s demilitarized zone, or DMZ, North and South also agreed to restart family reunions, open a liaison office, and to put an end to the 1950-53 Korean War, which officially is still being waged since only an armistice rather than peace treaty was ever signed.

“A new history begins now,” Kim wrote in the visitor’s book of the DMZ’s Peace House. “An age of peace, at the starting point of history.”

But despite the sickly symbolism, the summit’s key subject of denuclearization was only described vaguely, leaving observers to guess what Kim might want in return.

Newly confirmed U.S. Secretary for State Mike Pompeo, who met Kim in Pyongyang earlier this month, said the North Korean leader offered to “lay out a map that would help us achieve [denuclearization]” when he meets with Trump in coming weeks.

“We had an extensive conversation on the hardest issues that face our two countries,” Pompeo told ABC News Sunday. “I had a clear mission statement from President Trump. When I left, Kim Jong Un understood the mission.”

According to South Korean officials, Kim said he would offer up his nukes in exchange for a non-aggression pact from Washington. But Trump’s hawkish new National Security advisor John Bolton was skeptical, telling CBS: “Well, we’ve heard this before … the North Korean propaganda playbook is an infinitely rich resource. What we want to see from them is evidence that it’s real and not just rhetoric.”

It’s unsurprising that Bolton remains dubious, given he’s a belligerent who still defends the Iraq war, and has advocated preemptive strikes on both Iran and North Korea, despite the devastation that could be wrought on Seoul from Pyongyang’s conventional, chemical, biological and nuclear retaliation.

Still, Bolton is correct in that for North Korea to abandon nuclear weapons it would require a fundamental change in its founding and governing precepts. Bylaws of North Korea’s all-powerful Workers Party define its purpose as to complete the revolution and “liberate” the South, while those who oppose the Party are by necessity “enemies of the people.”

Besides, North Korea’s founder, Kim Il Sung, had a defining philosophy of Juche, best defined as ultra-patriotic self-reliance. This would seem impossible to reconcile with accepting promises of non-aggression from age-old nemesis the United States. Kim Jong Il — son of Kim Il Sung and father to the current Supreme Leader — added his own trademark philosophy of Son’gun, or “military first,” which built on Juche while wrapping in elements Marxism-Leninism, militarism, neo-Confucianism, and realism. In a nutshell: raw power conquers all.

“From that perspective they are the ultimate realists in the traditions of Machiavelli and Hobbes,” Daniel Pinkston, an East Asia expert at Troy University in South Korea, tells TIME. “They have this obsession or fetish of power. Every political outcome is determined by power and power asymmetries.”

This hasn’t changed with the third generation Kim, who took up the regime reigns in 2011, and introduced his own political philosophy in March 2013 to cement his revolutionary credentials: Byungjin, which means to “advance in tandem,” referring to the nation’s nuclear program and economy.

North Korea has already made tremendous progress in both: the regime now has a nuclear armed international ballistic missile it claims is capable of devastating anywhere on the continental U.S.; by relaxing state control over the economy, North Korea experienced 17-year record growth of 3.9% in 2016 despite ever-tougher sanctions.

But how to square Byungjin with disarmament? Socialist revolutionary doctrine are not policies to be tweaked or discarded, but pure manifestations of the leadership’s eternal will. Even when announcing the dismantlement of his Punggye-ri nuclear testing site — which Kim has since said would take place this month watched by South Korean officials — he described the nuclear weapons it spawned as a “treasured sword.”

Lest we forget that North Korea already signed a denuclearization agreement with South Korea in 1992. And with the U.S. in 1994. And with the Six Party Talks participants in 2005. And with the Obama administration in 2012.

Every strata of North Korean society is infused with the necessity of nuclear weapons to safeguard the regime and complete the revolution in the South. The nation’s constitution was even amended in 2012 to describe it as a “nuclear-armed state.” For the North to abandon its nukes “is something so radically revolutionary that it’s analogous to the Pope abandoning Jesus Christ and adopting Buddhism,” says Pinkston.

That’s no reason not to try again, of course, as the military “option” is in fact nothing of the kind. But it will take a titanic feat of patience and trust-building. On May 5, North Korea’s clocks will leap forward by half-an-hour. But for the regime to truly leave its past behind won’t be so easy. 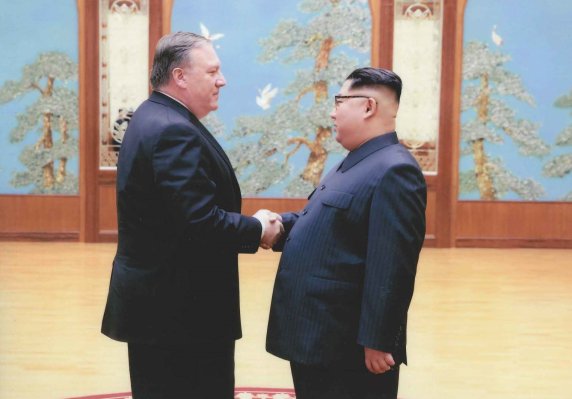 Secretary of State Pompeo Thinks Nuclear Deal Possible After Meeting With Kim
Next Up: Editor's Pick