Secretary of State Mike Pompeo said he’d assessed North Korean leader Kim Jong Un during their meeting over the Easter weekend and concluded that there’s at least a chance for the U.S. to strike a denuclearization deal.

“My goal was to try and identify if there was a real opportunity there,” Pompeo said during an interview on ABC’s “This Week” on Sunday. “I believe there is.”

President Donald Trump said on Saturday he expects his historic meeting with Kim will take place “over the next three or four weeks” and that details of the summit are still being ironed out.

Pompeo was CIA director when he met with Kim and was confirmed by the Senate as the top U.S. diplomat on April 26. He said he found Kim to be “well prepared” and ready to talk about how to achieve U.S. objective of “complete, verifiable, irreversible denuclearization.”

“There is a lot of work to do, but I am very hopeful that the conditions that have been set by President Trump give us this chance,” Pompeo said.

The two officials also talked about obtaining the release of American detainees in North Korea when Kim and Trump meet, Pompeo said. Mindful of previous times the North Korean regime has not followed through on promises, Pompeo said the U.S. is not going to take Kim at his word and will require concrete action.

“We’re going to negotiate in a different way than has been done before,” Pompeo said. “We’re going to require those steps that demonstrate that denuclearization is going to be achieved.”

“We have our eyes wide open,” he added. “As the president said, only time will tell.”

Speaking to reporters on Sunday while traveling in the Middle East, Pompeo minimized concerns that a possible decision by the U.S. to abandon the Iran nuclear deal would sour North Korea on negotiations with the U.S.

“I don’t think Kim Jong Un is staring at the Iran deal and saying, ‘Oh goodness, if they get out of that deal, I won’t talk to the Americans anymore,’ ” Pompeo said en route to Israel from Saudi Arabia, according to pool reports.

“There are higher priorities, things that he is more concerned about than whether or not the Americans stay in the” Iran agreement, he said. 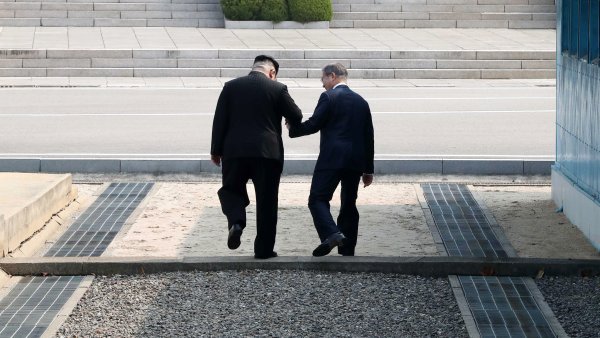 How the Historic North Korea Summit Gave Trump a Path to Create a Lasting Peace
Next Up: Editor's Pick