For the first time in more than three decades, the U.S. men’s national team will not compete in the World Cup.

The stunning and surreal nature of the America’s absence is now a reality for U.S. soccer fans as the 2018 FIFA World Cup, which will be held in Russia this summer, draws near. Months after the U.S. failed to qualify, Americans perhaps have now come to terms with the fact that there will be no shot at a come-from-behind win or another extraordinary rally from U.S. goalkeeper Tim Howard, who was fittingly referred to as the “Secretary of Defense” by fans at the 2014 tournament after his record-breaking game.

The U.S.’s failure to qualify for the World Cup also marks a setback the country’s efforts to elevate the most-watched sport in the world in America. Of course, American fans could always look to the women’s national team, which has three World Cup titles under its belt, for that inspiration. But the U.S.’s unexpected absence from the men’s tournament could mark a turning point for how the structural institution of soccer in the country is handled at the grassroots level, where issues of accessibility has been cause for concern due to high club costs, among other factors.

“Could this be a salutary moment to reconfigure the structural aspects of U.S. soccer?” asked Laurent Dubois, author of The Language of the Game: How to Understand Soccer, in an interview with TIME. “If that’s the case, if it forces the change, then it might all be for the best in the long term.”

Here’s what you should know about why the U.S. men’s national team won’t compete at the 2018 World Cup.

In the final qualifying round for the 2018 World Cup last October, the U.S. men’s national team lost 2-1 against Trinidad and Tobago in a stunning defeat.

That loss was just one of a series of events that led to the U.S.’s failure to qualify for the World Cup. The match came at the end of a two-years-long qualifying tournament for national teams in the Confederation of North, Central American and Caribbean Association Football leagues. A rocky start for the U.S. meant the country’s fate relied heavily on how other teams fared. Indeed, the loss against Trinidad and Tobago was just part of the concoction that led to the U.S.’s absence at the 2018 World Cup. Honduras and Panama stunned Mexico and Costa Rica, respectively, in the final round last October. Those wins and losses placed Mexico, Costa Rica and Panama in the World Cup, and the U.S. in fifth place — even out of reach of a fourth-place finish where the team could have fought for a World Cup spot in the inter-confederation play-offs.

“People tend to underestimate the competition in CONCACAF because they play against these smaller countries in Central America and the Caribbean,” Dubois said. “But, of course, a lot of these countries do have great soccer traditions and there really isn’t ever a guarantee that the U.S. will make it.”

The U.S.’s World Cup absence has “set back” soccer in the country “by several years,” according to Jurgen Klinsmann, the former men’s national team coach who was ousted in November 2016 after their less-than-satisfying performance thus far. Now, months after defeat, Americans must address the question: Why did a team in a country with tremendous size and resources fail to qualify? Part of the issue, Dubois said, is inaccessibility to soccer on the youth level, as hefty costs for club teams could bar talented players from the sport. In fact, European countries with dominant teams like Germany, France and Belgium “all have a record of doing really sustained grassroots support for sports at the youth level so everyone has access to it,” Dubois said.

“If you want to have the best national team,” Dubois said, “you’ve got to start at the roots in terms of cultivating and supporting the best talent across the board.”

The U.S. somehow survived its “Group of Death” in the first round of the 2014 World Cup, which consisted of the tournament’s eventual champion Germany, as well as the U.S., Portugal and Ghana. The U.S. advanced to the Round of 16 thanks to its 2-1 win against Ghana, where the then 21-year-old John Brooks scored the game-winning goal in the 86th minute of play.

The U.S. then faced Belgium in the Round of 16 for another memorable, albeit heartbreaking, match for Americans. Despite a 2-1 loss, the July 1, 2014 match is perhaps best known for the stunning performance from U.S. goalkeeper Tim Howard. In the overtime game, Howard had 16 saves — the most of any in recorded history of the World Cup.

In fact, neither Belgium nor the U.S. scored a point in the 90 minutes of the game. In overtime, Belgium secured a win, 2-1.

A year later, however, the U.S. women secured its third World Cup title when it beat Japan, 5-2, in the final match. The U.S.’s dominance in women’s soccer has certainly spurred more interest in the sport among American fans. It also raised awareness for substantial wage inequality among the men’s and women’s teams. Indeed, the U.S. women won $2 million for its 2015 World Cup title — a fraction of the $35 million Germany, the 2014 men’s World Cup champions, earned for its win a year prior.

The U.S. women’s team went on to fight for a new contract with the U.S. Soccer Federation to secure higher wages and better travel accommodations, among other things. The new contract did not guarantee equal pay to the men’s national team, despite the women’s comparative dominance.

What can I expect for the tournament this year?

“A lot of Americans have connections to other countries through their ancestors or other reasons,” Dubois said, “and I think people will pick affiliation based on that sometimes, as well as what teams they’d like to watch.”

Iceland, for example, could draw fans as it competes in its first-ever World Cup. The small country is even encouraging international fans to root for its team with an offer to send fans to the country for its first match, the country’s tourism website says. Egypt will also make its return to the World Cup for the first time since 1990 — led by star forward Mohamed Salah, who plays for the English club Liverpool and Egypt’s national team.

A World Cup without the U.S., as well as teams like Italy and Ghana, could clear the way for a more exciting tournament as well.

“It kind of opens up the competition a little bit,” Dubois said. “A lot of times the final eight teams are a very predictable list, and this year might be a year where there are surprises.” 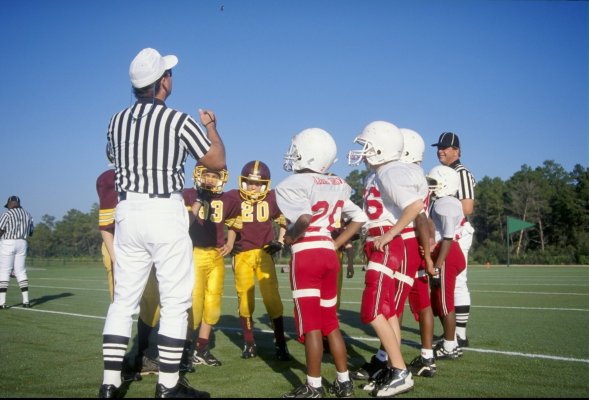 Playing Youth Tackle Football Is Linked to Earlier Symptoms of Brain Disease
Next Up: Editor's Pick