Ideas
By Tom Plant
Plant is Director of Proliferation and Nuclear Policy at the Royal United Services Institute, a defense and security think tank in London. He previously worked on North Korea issues for the U.K. government.

As the dust begins to settle following Friday’s remarkable summit between the leaders of North and South Korea, Chairman Kim Jong-un and President Moon Jae-in, attention will now inevitably turn to the next big event: the first ever face-to-face meeting between a sitting U.S. President and a leader of North Korea. Loosely planned for late May or early June, the stage has now been set by the leaders of the two Koreas and their agreement, the “Panmunjom Declaration for Peace, Prosperity and Unification of the Korean Peninsula.”

Whereas expectations were broadly for more style than substance, the Declaration is in fact rather heavy on content. Along with numerous ways in which the Korean peoples are to be brought together – joint participation in sporting events, reunions of families split by the new border after the armistice, and a broad array of exchanges – the Declaration lays out a plan to pursue several welcome military risk reduction mechanisms, along with an agreement to “completely cease all hostile acts against each other.” But the devil is in the details.

On the last point, for example, the agreement specifically mentions an end to the broadcast of propaganda through loudspeakers at the border, and to the distribution by balloon of leaflets and other media into the North by Southern non-governmental organizations. Will Moon’s government act to restrict the freedom of expression of its citizens in deference to the North’s sensibilities? If it does, then that sets a worrying precedent for North Korean influence over South Korean society. And if it instead chooses to request rather than compel its citizens to comply, and those requests are not heeded, what then from the North Korean side?

Perhaps these issues were laid out in private. But a lot does seem to have been left unsaid between Moon and Kim. Human rights issues were firmly off the agenda, for instance. So the catalogue of North Korean abuses – which a U.N. Commission of Inquiry found in 2013 amounted to crimes against humanity – remains unaddressed. It was only last year too that Kim’s brother, Kim Jong-nam, was murdered in a Malaysian airport by agents of North Korea using the nerve agent VX. But of chemical and biological weapons, no mention.

This shows just how far we are from serious progress on the difficult issues, foremost of which is the North Korean nuclear weapons program. Here the Declaration merely reaffirmed a long-standing but vague joint commitment to a nuclear-free Korean peninsula. Given how that commitment has been made and broken in the past, this cannot be taken as movement from Pyongyang.

The tone of Friday’s summit meeting means that the prospect of U.S. military action has receded. It will also now be increasingly difficult for the U.S. and its like-minded allies to rally support for maximum pressure on North Korea. Why should we continue to punish the North, many countries will respond, when they are making such diplomatic progress with the South?

The task left for President Trump, hard as it already was, therefore now looks almost impossible. Kim has not budged, and it will be harder to coerce him to move. If Trump plays too much hardball, then he risks the U.S. looking like the bad guy, unwilling to make peace with the freshly-whitewashed North Korea; if he plays it too soft then Kim Jong-un will be able to have his cake and eat it: an unrestrained nuclear program and reduced economic pressure.

But Trump still has some cards still to play. South Korea can’t replace the Korean Armistice Agreement with a peace treaty without U.S. agreement, and it can’t unilaterally offer substantial economic concessions to the North because U.N. sanctions – behind which the U.S. has been the prime mover – remain in place.

The dynamics of this kind of summit meeting might also work for President Trump. Yes, it seems that he is vulnerable to flattery and the trappings of a head of state meeting, as others have found. But this is an opportunity to make a deal that, unlike the Iran nuclear deal or the Paris climate agreement, he would personally own. A triumph here would be his triumph. So, acknowledging the need to make serious and rapid progress on the nuclear file, balanced against the cold fact that North Korea simply will not give up its nuclear weapons while relations with the U.S. are at their current ebb, this is an opportunity to do a deal that is not signed in ink but sealed with a handshake.

Modeled on the U.S.-Soviet Presidential Nuclear Initiatives of the early 1990s, which led to huge reductions in tactical nuclear weapon arsenals, President Trump could agree with Chairman Kim to set in motion the Korean Nuclear Initiatives: a series of reciprocal, unilateral commitments to address the concerns of the other on a range of nuclear and broader security issues.

The Trump-Kim summit could agree on the outlines within which those commitments will be pursued; the U.S. could further agree to support some of the military risk reduction measures outlined in the Panmunjom Declaration, while maintaining economic pressure; and North Korea could expand its nuclear and missile test moratorium to include other activities, like ground-based engine tests for its missiles. Cabinet-level officials on both sides would then meet regularly to exchange briefings on issues of concern, setting the stage for announcements from their leadership on new measures under the Korean Nuclear Initiatives, and for future summits.

This would mark some concrete progress, while the Korean Nuclear Initiatives – which, critically, would be offered unilaterally rather than negotiated as a quid pro quo – would allow a track record of delivery to develop between the two parties, and the two leaders. It would allow ambitions to remain high, while the risk to each side of being cheated on a more conventional deal are eliminated.

Nobody should be under any illusion as to the likelihood of long-term success for this summit process. But everything must start somewhere, no process is perfect, and it is better than the war many feared was coming in late 2017. The inter-Korean summit has completed the tonal shift from conflict to concord on the peninsula. Now it’s up to President Trump to do the deal of his life. 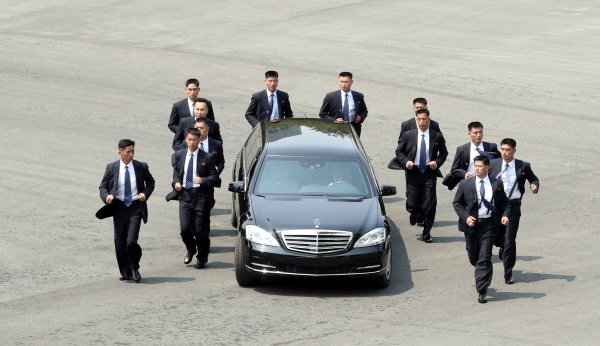 Kim Jong Un Brought 12 Bodyguards Who Trotted Alongside His Limo During His Meeting in South Korea
Next Up: Editor's Pick