President Donald Trump on Saturday called for a Montana senator to resign after he accused White House physician Dr. Ronny Jackson of misconduct while in the White House.

Jackson, who Trump had nominated to lead the U.S. Department of Veteran’s Affairs, withdrew from consideration after lawmakers, including Montana Sen. Jon Tester, accused Jackson of drinking on the job, distributing medication without prescriptions and creating a hostile work environment. Jackson has denied the allegations, but still withdrew his bid to lead the government’s second-largest agency.

After earlier suggesting that Jackson drop out, Trump leapt to Jackson’s defense on Saturday, even calling for Tester’s resignation.

“Allegations made by Senator Jon Tester against Admiral/Doctor Ron Jackson are proving false,” Trump tweeted Saturday. “The Secret Service is unable to confirm (in fact they deny) any of the phony Democrat charges which have absolutely devastated the wonderful Jackson family. Tester should resign.”

In a second tweet, he added that, “Admiral Jackson is the kind of man that those in Montana would most respect and admire, and now, for no reason whatsoever, his reputation has been shattered. Not fair, Tester!”

Jackson has served as the White House physician under both Trump and former President Barack Obama. He continues to fill that role, despite the allegations. 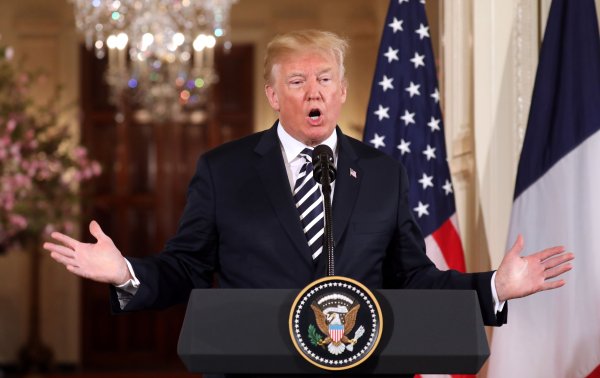 Trump Caught Winging It
Next Up: Editor's Pick