Review: Facebook's New Oculus Go Headset Is What Virtual Reality Should Have Always Been

The good: Affordable, Easy setup, No smartphone or computer required, Great image quality
The bad: Experience is limiting compared to other wireless headsets like Lenovo’s Mirage Solo, Not incredibly comfortable to wear for long periods of time
Who it’s for: The Oculus Go’s price and ease of use make it the best general purpose VR headset, especially for those interested in entertainment rather than hardcore gaming.

Two years ago, virtual reality had a banner year. The Kickstarter-hyped Oculus Rift had finally launched that March after Facebook had spent $2 billion to acquire its parent company in 2014. Not to be outdone, HTC soon released its own high-end virtual reality headset, the HTC Vive, just days later in April. It was something of a coming out moment for virtual reality, a milestone that the tech industry had positioned as the missing piece that would take virtual reality from a science fiction-inspired pipe dream to a digital revolution.

But the technology was still fairly rudimentary. Headsets like the Oculus Rift and HTC Vive boasted impressive performance, highly accurate motion controls, and enveloping graphics, but required a wired connection to a powerful (and pricey) desktop computer in order to work. Both headsets were also notably expensive when they launched, although both Facebook and HTC have since lowered those costs. Then came the next wave of VR: wireless smartphone-powered viewers that offer a much cheaper and more convenient experience. But in order to use the best models available, like the Samsung Gear VR or Google Daydream View, you needed to have a compatible Android smartphone.

Now, Facebook is attempting to address those concerns and others with the Oculus Go, which launches on May 1 starting at $199. The Go is part of a new wave of cord-free all-encompassing virtual reality devices that don’t require any power from a separate device, whether it be a desktop PC or a smartphone. Lenovo announced its own wireless standalone VR headset called the Mirage Solo earlier this year during the CES conference in January. But that headset, which at $399.99 costs twice as much as the Oculus Go, differs from Facebook’s in an important way. Lenovo’s Mirage Solo supports six degrees of freedom, a term used to describe the type of VR that makes it possible to physically move around in a virtual space. The Oculus Go, by comparison, uses an orientation system, which means you can rotate your head and hands in VR but can’t move around within virtual space.

But that doesn’t mean the Oculus Go isn’t capable of convincing your body that you’re elsewhere. As is the case with the Gear VR, the Oculus Go can still trick you into thinking you’re standing atop a mountain, soaring through the air, or shooting aliens in outer space. The digital experience that the Go offers still surrounds you in a 360-degree virtual world full of apps that often play with depth perception and camera movement to create such illusions. The Oculus Go’s internal components are similar to the technology you’d find in a smartphone, save for some optimizations that were added specifically with VR in mind. Although the Go may not have the processing prowess of the desktop computer-powered Rift, Facebook’s newest headset is perfectly capable of running casual games and entertainment apps.

As such, Facebook is positioning the Oculus Go as an entertainment and social device above all else. Facebook is betting that some of the most popular use cases for the Go will be for watching Netflix on a movie theater-sized screen or for virtually gathering with friends to play board games. That’s why it specifically focused on the viewing experience when developing the Go, which has a fast switch LCD panel, unlike the Rift. That technology should enable the screen to switch colors more quickly than a standard LCD in order to make the overall image clearer and to reduce blur and motion sickness.

The Oculus Go’s ease of use is by far its best useful attribute. After setting up the headset, which required me to follow instructions via an app, all it takes to get started is simply strapping on the headset and pressing the power button. That’s it. There’s no need to connect your headset to a computer, snap in your smartphone, or clear space in your living room. It’s the easiest and most convenient virtual reality experience I’ve ever had in terms of what’s needed to get started.

One of the characteristics that impressed me the most about the Oculus Go was how clear and crisp its screen looked. On many of the VR headsets I’ve used in the past, including the pricier Oculus Rift or $99 Google Daydream View, the display would occasionally appear blurry if I moved my head or glanced at another area of the scene too quickly. This sometimes happens with the Oculus Go, but it’s less noticeable than on other headsets, presumably because of its fast-switch LCD screen. The screen door effect is also far less apparent on the Go versus gadgets like the Daydream View and Gear VR. Since your eyes are so close to the screen in virtual reality, it’s sometimes possible to see the space between the pixels, which often looks like a grid similar to a screen door. This never bothered me in the past, but after using the Oculus Go, it became much more noticeable when using other headsets.

Read more: How the New ‘God of War’ Game Was Inspired by Real-Life Parenting Challenges

With a device that’s meant to be worn on the face, comfort is important. The Oculus Go mostly delivers on this front: It felt fine to wear while playing short games or watching an episode of a TV show, but I’m not sure if I’d be able to sit through a whole movie with it. That being said, the headset always felt snug even while wearing glasses, and it was very easy to adjust its fit. Oculus also includes an eyeglass spacer in the box in case the headset doesn’t fit over your eyewear.

The Oculus Go is just as simple to use as it is to set up. The home screen’s tiled interface displays apps from your library. A toolbar that’s visible when looking down includes options for navigating to the home screen, your app library, the app store, a photo gallery for viewing images from your phone and social media, and a VR web browser. Other sections in this toolbar make it possible to view notifications and connect with friends in VR too.

I also preferred the Oculus Go’s controller over the Daydream View’s because its shape makes it more comfortable to grip. I never found myself struggling to make a selection since the button I needed was located on the controller’s underside, making it feel natural to reach.

Virtual reality is only as good as the content you can enjoy through it, and Facebook says the Oculus Go will launch with more than 1,000 apps, games, and other types of experiences. Oculus is also launching its own TV app for the Go that will offer new options beyond Netflix and Hulu for those who want to watch television in VR, such as Crunchy Roll, Red Bull TV, and CBS All Access. Another new Oculus app called Venues will make it possible to stream live events like concerts and sports through the headset. Facebook also has its own social app for the Go called Oculus Rooms, which is designed to be a virtual hangout spot for Oculus Go and Gear VR owners. Oculus Rooms users can meet up with friends to view photos, watch a movie, or play a virtual board game.

Unsurprisingly, the experiences I liked best were largely visual, whether it be watching Netflix, riding a virtual roller coaster, playing a virtual version of the strategy board game Settlers of Catan, or being transported to the “upside down” universe from Stranger Things. Tasks like browsing the web are still better left for your smartphone or laptop.

Facebook says the Oculus Go should last for about two hours when playing games and two and a half hours when watching video. That seemed accurate based on my testing; after roughly an hour of playing games through the headset, my Oculus Go had 54 percent of its battery left.

My biggest setback isn’t about the Oculus Go itself, but virtual reality at large. When it comes to VR, hardware technology seems to be advancing at a faster rate than the content. Many of the virtual reality apps I tried were certainly fun, entertaining, and impressive, but none of them felt compelling enough to keep my attention for more than about 30 minutes or so. And if Facebook is pitching virtual reality as the next evolution of how people keep in touch online, it won’t be valuable until a significant amount of people have adopted the technology.

Given the growing interest in virtual reality from large tech firms as well as filmmakers, news outlets, and educational organizations, that’s bound to happen at some point. What’s unclear is how long that will take. But after using Facebook’s new headset for about a week, it’s clear that the Oculus Go is a step in that direction. And if you’re curious about virtual reality but haven’t tried it yet, this might be the best place to start. 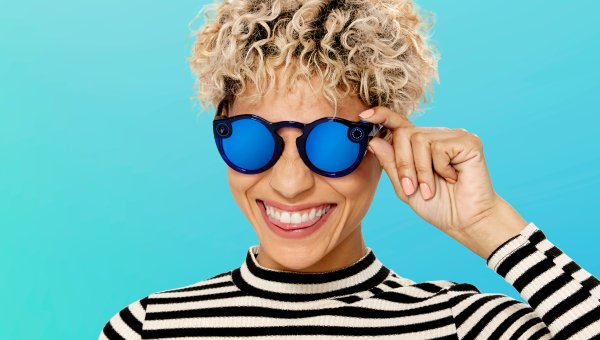 The New Snapchat Spectacles Can Do One Important Thing the Old Ones Couldn't
Next Up: Editor's Pick