The leaders of North and South Korea made history Friday, meeting one another for the first time at the beginning of a landmark summit between the historic foes.

The two leaders shook hands at the military demarcation line that separates the countries since a 1953 armistice put an end to the fighting of the Korean War. South Korean President Moon Jae-In hailed the “historic moment” and North Korean leader Kim Jong Un said he was “moved” that his counterpart had come all the way up to the border to greet him.

Kim and Moon seemed to communicate with ease as they greeted each other across the demarcation line. North Koreans and South Koreans speak the same language, though there are differences in dialect. According to Voice of America, the biggest divergence is vocabulary: while language in North Korea has reportedly not changed that much over the past half a century, South Korea has added a wealth of new words to the Korean lexicon, many of them related to pop culture or borrowed from English.

After the two leaders exchanged pleasantries, Kim stepped over the border, becoming the first North Korean leader to do so.

Read the full exchange below:

Kim Jong Un then stepped across the demarcation line, where the leaders shook hands and and posed for photographers. In an unscripted moment, Kim invited Moon to stand in North Korea. Moon obliged, becoming the first South Korean leader to cross the boundary into the North since then-President Roh Moo-hyun met with Kim Jong Il in 2007. 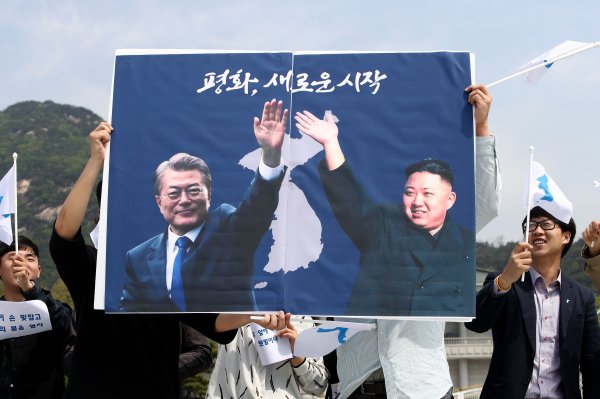