For more than four decades, in business and now in politics, Donald Trump has thrived on spontaneity and disorder. But the perils of the President’s improvisational style were on display Thursday, when the nomination of his White House doctor to run the Veterans Affairs Administration imploded and a rambling interview backfired with Trump’s acknowledgement that his longtime personal lawyer Michael Cohen had represented him in “this crazy Stormy Daniels deal.”

The failure of Dr. Ronny Jackson’s VA nomination, and Trump’s haphazard handling of it—from the announcement-by-tweet to the venting Fox & Friends interview—show a President becoming unbound from the traditional confines of the office. The guard rails that Chief of Staff John Kelly brought to the White House last summer appear to have gotten loose, and increasingly Trump is making decisions without vetting or wide consultation with staff.

Trump is burning up political capital in the process. “The White House is historically designed in order to limit the risk of embarrassment,” says Timothy Naftali, a presidential historian at New York University. “If he would use his staff better, he wouldn’t find himself in these embarrassing positions.”

The latest chapter came to a close on the morning of April 26, when Jackson withdrew his nomination to head the VA amid allegations of professional misconduct, almost four weeks to the day since Trump announced his nomination on Twitter. Only a tight circle of advisors had known Jackson’s name was in the running to replace the beleaguered David Shulkin, and senior White House officials were caught off guard by the sudden announcement. Given his lack of experience leading a massive organization like the VA, Jackson’s nomination was going to require carefully orchestrated outreach on Capitol Hill and a thorough analysis of his track record.

It didn’t happen. In the intervening weeks, Democrats on the Hill smelled blood and launched an opposition research campaign that included anonymous attacks from former staff. (Jackson called the allegations, which include intoxication on the job and loose distribution of medication, “completely false and fabricated.”)

Jackson is hardly the only Cabinet-level official or nominee to create an embarrassing spectacle in this young presidency. Andy Puzder withdrew from consideration to become Labor Secretary amid abuse allegations, while Tom Price was fired as Secretary of Health and Human Services over his use of taxpayer-funded charter flights. Multiple other officials remain in place but are weathering scandals of their own, including Scott Pruitt at the Environmental Protection Agency and Ben Carson at Housing and Urban Development.

The same morning Jackson withdrew his name, Trump gave a meandering telephone interview to Fox & Friends—an episode reminiscent of his campaign, and something his aides been trying to avoid for several months. He suggested, seemingly off-the-cuff, that his Administration release photos from now-Secretary of State Mike Pompeo’s trip to meet with North Korean leader Kim Jong Un over Easter weekend. “We have incredible pictures of the two talking and meeting which I’d love to release,” Trump said on the show. “If we can I’ll do that, actually. It’s not a bad idea.”

But Trump may have inadvertently jammed himself by freelancing. His comments about lawyer Cohen on Fox are already being used by federal prosecutors in a court filing. Trump said Cohen handled just “a tiny, tiny little fraction” of his “overall legal work,” which is the exact argument the government is trying to advance in court to show that much of the documents retrieved from Cohen’s office don’t deserve to be protected by attorney-client privilege, Vox reports.

Trump’s leadership style hasn’t changed since he ran the Trump Organization, says Naftali: “He still believes he can wake up in the morning and say, ‘Let’s do this.’” When he was running his real-estate businesses, Trump would often decide to tear up his schedule because of something he saw on the news or read in the paper. He brought that habit to the White House, bucking the traditional constraints of the office.

This willingness to throw out conventional thinking, making decisions quickly and without broad discussion, is one of the things that attracted many supporters to him in the first place. “That’s exactly what we were hoping for when he was a candidate – someone who acts less like a politician and more like a businessman, someone who sees the field and makes a decision,” says Eric Bolling, a former Fox news anchor who regularly speaks to Trump. Bolling said Trump’s tweets and unpredictable comments keep foreign leaders “off guard” and credits Trump’s brash style for a potential breakthrough with North Korea and getting NATO allies to increase military spending.

World leaders see value in Trump’s style, as well. On April 2, the President of Lithuania, Dalia Grybauskaitė, visited the White House with the leaders of Baltic neighbors Estonia and Lativia and credited Trump for putting pressure on NATO allies to invest more in their military and showing more decisive leadership. Standing alongside Trump during a press conference in the White House’s East Room, Grybauskaitė said she had joked with him “that we need leadership sometimes for decision-making, even unpredictable leadership, to make enough leverage and pressure for the rivals to believe that we can make a decision.”

She added: “And that’s, we think, this kind of leadership in President Trump.”

Trump isn’t the first president to make decisions spontaneously. President George H. W. Bush surprised his staff in 1990 when he made a memorable declaration to reporters on the South Lawn of the White House: “This will not stand, this aggression against Kuwait.” There was still ongoing debate within his administration over how to react to Saddam Hussein’s invasion of Kuwait, and Bush’s words set the stage for the U.S. invasion of Kuwait to remove Saddam’s forces. President Richard Nixon unexpectedly created what is now a long-standing U.S. policy of not negotiating with terrorists; faced with questions from reporters about two U.S. diplomats and three others held hostage in Sudan in 1973, he said the U.S. “will not pay blackmail.” Nixon’s gut instinct set into motion a foreign-policy doctrine that has survived ever since.

But in previous administrations, these types of incidents were rare. “This president is interacting on an hourly basis and there is no filter,” Naftali says. “There are no staffers between his impulses and his Twitter finger.”

Still, there are those who love Trump for precisely his willingness to upend conventions. And it’s clear that the President feels increasingly empowered to do it. As Kanye West—who says he relates to Trump’s “dragon energy”—might say: “I no longer have a manager. I can’t be managed.” 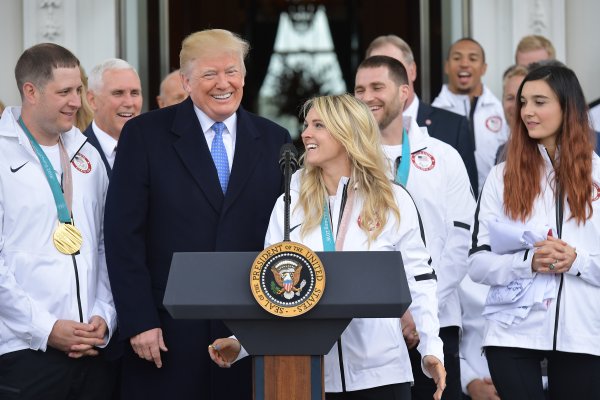