This May Be Why Autism Diagnoses Are On the Rise, According to the CDC

Reported rates of autism are increasing, according to a new report from the Centers for Disease Control and Prevention (CDC).

Approximately 1.7% — or 1 in 59 — of 8-year-old kids in 11 diverse communities across the U.S. could be identified as having autism in 2014, according to the report. That’s a small but measurable increase over the last estimate for autism prevalence, which was released in 2016 and based on data from 2012, of 1.5% — or 1 in 68 kids — and the highest rate ever recorded by the agency’s Autism and Developmental Disabilities Monitoring (ADDM) Network, an extensive tracking system that monitors the prevalence and characteristics of autism spectrum disorder (ASD) among more than 300,000 8-year-old children. (The sample includes about 8% of the country’s 8-year-olds.)

While the increase marks the highest rate of autism ever recorded by the ADDM, that doesn’t necessarily mean that more children have autism now than in years past. Instead, according to the CDC, the uptick likely has to do with better identification and reporting of autism, particularly among black and Hispanic communities, which have had historically lower rates of autism detection.

“There’s been a narrowing of the gap between white and black children with autism, and between white and Hispanic children, between the previous report and the current one,” says Dr. Stuart Shapira, associate director for science and chief medical officer at the CDC’s National Center on Birth Defects and Developmental Disabilities (NCBDDD). “It’s likely in part due to better identification, more screening and referral to services.”

While those improved diagnostic practices are encouraging, the report highlights the continued need for early identification and intervention. Fewer than half of the children in the ADDM were diagnosed younger than age 4, and — though the vast majority had developmental concerns noted in their medical records by age 3 — only 42% had a full developmental evaluation by that age.

“The soonest a child can be identified and connected to services, the better chance they have at reaching their full potential,” says Dr. Daisy Christensen, the surveillance team lead at the developmental disabilities branch of the NCBDDD. “It’s never too late to begin services, but we really do emphasize the importance of beginning those services as soon as possible.”

The ADDM looks exclusively at 8-year-olds because its in-depth analysis — which includes monitoring health and education records — makes it prohibitively difficult to look at a larger age range, and because most children can be diagnosed with autism by age 8, Christensen says. Some groups, however, estimate that the prevalence is higher among a broader swath of kids. A research letter published in JAMA in 2016, for example, estimated that out of 30,000 kids between the ages of 3 and 17, 2.24% had autism spectrum disorder. 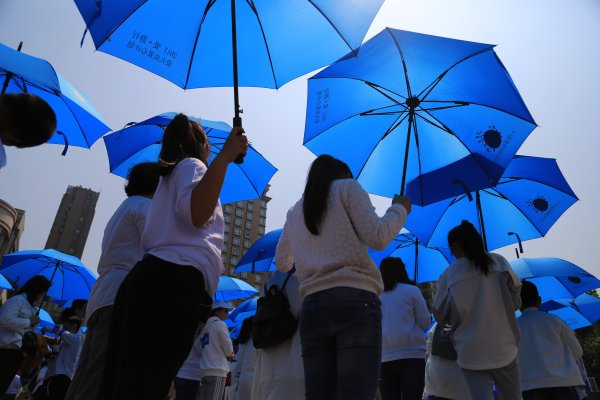 People Are Wearing Blue Today for Autism Awareness Day
Next Up: Editor's Pick