We’ve written about Boston Dynamics’ DARPA-funded Atlas robot again and again and again, but I got a chance to meet Atlas in person today and found out that everyone’s favorite terrifying humanoid is about to lose the system of cables and tubes that feeds it a steady diet of power, fluids and data.

Atlas has been handed over to CSAIL – the Computer Science and Artificial Intelligence Laboratory – at the Massachusetts Institute of Technology, where Team MIT has been responsible for getting the robot in shape for the DARPA Robotics Challenge. It’s a series of competitions eventually culminating next year in a $2 million prize given to the winning team.

MIT has been rejiggering Atlas’s code to make it faster and more autonomous: In the above video, postdoctoral associate Scott Kuindersma gives a brief overview of Atlas’s various parts, and explains how the robot’s being coded so that it can make its own decisions in certain instances and operate on its own during a blackout period of up to 30 seconds.

The end of the video features a demo in which Atlas comes across an obstacle – in this case, a two-by-four – and removes it from its path. This demonstration of decision-making, along with figuring out how to get Atlas to move about untethered (the actual hardware modifications would be done by Boston Dynamics) are a couple of the tasks that the MIT team is working on for the next round of the DARPA Robotics Challenge, which takes place in December. 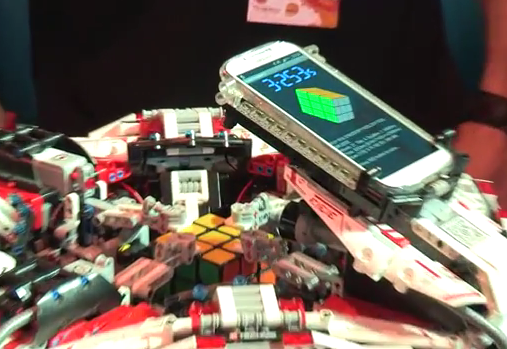 Watch This LEGO Robot Solve a Rubik's Cube in a Record 3.25 Seconds
Next Up: Editor's Pick