Why Protecting Education Would Prevent Terrorism

An empty classroom at the school in Dapchi, Nigeria, where dozens of school girls went missing after an attack on the village by Boko Haram on Feb. 23, 2018.
Afolabi Sotunde—REUTERS
Ideas
By Moza bint Nasser
Her Highness Sheikha Moza bint Nasser is the founder and chairperson of the Education Above All Foundation, a U.N. Advocate for the Sustainable Development Goals and a UNESCO Special Envoy for Basic and Higher Education.

Education is the key that unlocks human potential. For children living in the most disadvantaged and marginalized communities, it provides hope for a better future. But today, in hotspots across the world, education is under threat, with potentially serious consequences for all of us.

In Douma, Syrian civilians continue to live in fear after chemical weapons were dropped on their village in early April, killing at least 42 people. Elsewhere in the eastern Ghouta region, nearly 1,900 children have been killed between February 2014 and January 2015. Barrel bombs have been dropped on schools and hospitals, according to Human Rights Watch, and Syrian boys and girls who are supposed to be doing their homework and studying for tests are struggling to survive.

In February, extremists from Boko Haram stormed into a school in Dapchi, Nigeria, and captured approximately a hundred young girls. The same group captured hundreds of other girls in a raid on the village of Chibok in 2014. Fortunately, most of the Dapchi captives have now been released, but at least a hundred Nigerian girls remain prisoners of Boko Haram. What must be going through the minds of young Nigerian girls as they pack their book bags to go to school? Is it possible to get an education in these conditions?

The international community is failing these children. It is failing the boys and girls of Yemen and Gaza as well. The Charter of the United Nations states that it is the responsibility of the UN Security Council to “ensure international peace and stability.” But there is no peace and stability for these students, and the Security Council appears helpless to intervene on their behalf.

In many parts of the world, young people and children are living lives of hopelessness and despair. A quarter of all school-aged children live in countries devastated by conflict, millions are displaced refugees, and millions more are growing up in communities plagued by poverty. As a result, more than 263 million children and young people are now out of school, 63 million of them of primary school age.

Without an education, they will face a future of thwarted ambitions and broken dreams. They will lack the skills to gain meaningful employment and, out of anger and frustration, some of them will turn to extremism and violence. The sad fact is that terrorism appears to give a twisted sense of purpose and belonging to the desperate and the hopeless. And in communities of the marginalized and disadvantaged, terrorism can spread like a virus.

Education is the world’s vaccine against terrorism.

For more than 20 years I have worked with people and institutions across the world to bring education to children living in favelas in Brazil, refugee camps in Turkey and post-war neighborhoods in Iraq. Through the Education Above All Foundation (EAA), which I created in 2012, my colleagues and I have worked with partner organizations, community groups and government officials to help provide a quality education to boys and girls who might otherwise never see the inside of a classroom. Through EAA’s Educate A Child program, we aim to enroll 10 million of the 63 million primary age out-of-school children and have now received commitments from partner organizations around the world that will allow us to reach this worthy goal.

But this work will never be enough if schools, teachers and students are not shielded from violence. In the past decade, schools in Gaza, Syria, Yemen, Nigeria and elsewhere around the world have been bombed and burned. Teachers have been murdered and students have been recruited as child soldiers. The victims of these terrible tragedies are now coming of age.

What will become of these children when they reach adulthood? What chance do they have of living peaceful and productive lives? How will they resist the dark voices calling them to embrace violence and extremism? Education gives young people the resilience and the critical skills they need to reject hate and violence. It also gives them the most important tool they will need to negotiate their way through a complex and changing world: a rational and prepared mind.

We need to do all we can to ensure that young men and women in the most disadvantaged and marginalized communities are not denied the opportunity to get an education. We must do this for the children, and also for ourselves. If we want to live in a peaceful world, free of the terrorist threat, we need to do more to inoculate our children against extremism. 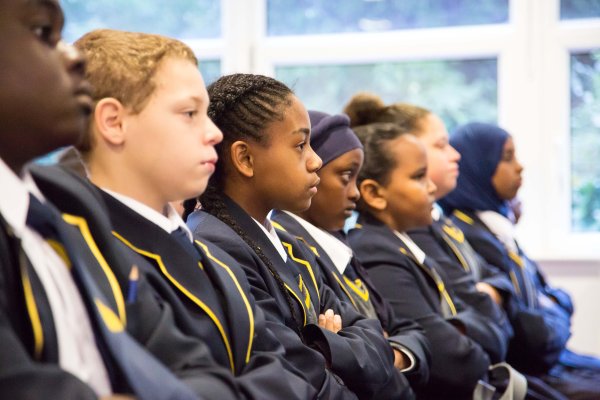 What It's Like to Study at the Strictest School in Britain
Next Up: Editor's Pick