The Romaine Lettuce E. Coli Outbreak Is Sending an Unusually High Number of People to the Hospital

The E. coli outbreak that has the Centers for Disease Control and Prevention (CDC) urging consumers to avoid romaine lettuce is linked to an unusually high number of hospitalizations, officials said on a call with reporters.

A CDC update says 149 people from 29 states have become sick as a result of the outbreak, and one has died. About 50% of these patients — 64 out of 129 with available information — have been hospitalized, according to the CDC. That’s significantly higher than the infection’s typical 30% hospitalization rate, according to the agency.

CDC lab testing has shown that the strain of E. coli implicated in the outbreak is one known to cause especially severe illness, likely accounting for the higher-than-normal number of hospital admissions, officials said on the call.

E. coli toxins cause disease by binding to the cells that line blood vessels, eventually destroying the lining of the blood vessel, CDC officials explained on the call. In many cases, the infection results only in gastrointestinal problems that clear within about a week. But more potent strains, like the one at work in the current outbreak, may bind to cells more tightly, potentially causing more serious complications, including a type of kidney failure called hemolytic uremic syndrome.

Seventeen patients, about 10% of the total sample, have reported this complication, compared to about 5% in an average outbreak, according to the CDC. No deaths have been reported.

CDC officials have traced the outbreak back to romaine lettuce grown in the Yuma, Ariz., region. At first, advisories specifically pertained to chopped romaine lettuce, but the agency later updated its consumer advisory to include whole heads and hearts of romaine. Investigators have identified the apparent source of contaminated whole heads of romaine — Yuma’s Harrison Farms — but continue to look into more than two dozen other growers that may have produced chopped romaine involved in the outbreak.

Consumers, for the time being, have been advised to throw away any store-bought romaine lettuce and to avoid buying more, or ordering it in a restaurant, unless they can confirm it was not sourced from the Yuma area. And though the growing season in Yuma is near its end, officials warned that it’s impossible to predict whether new illnesses will continue to develop — so for the time being, it’s safest to stick to other leafy greens. 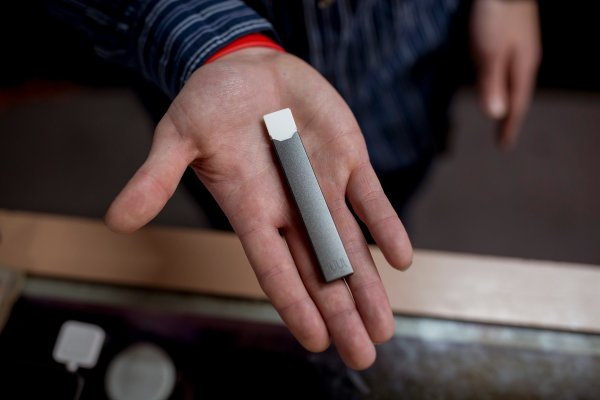 The FDA Is Cracking Down on 'Juuling' and Youth E-Cigarette Use
Next Up: Editor's Pick