A potato farmer in Spain achieved viral fame because the internet thinks she resembles President Trump.

It started, as these things do, with a photo. Dolores Leis Antelo posed for the now-widespread portrait for local newspaper La Voz de Galicia for an article about her simple life on the farm.

In the snapshot, she gazes out at the land, hoe on her shoulder. She has an expression that says she’s serious about her spuds. Some likely just saw a hardworking woman. Others saw Trump.

Unlike POTUS, she doesn’t have a desk button for soda. But like him, she does have light, wispy hair and and sun-tanned skin, likely from days spent caring for her crops.

Because the internet sees what it wants and will amplify even the slightest similarities between people, a new Trump lookalike was born. People who think she’s a dead ringer for the White House resident are pretty much losing their minds.

Some are even calling her “Donald Trump of the Costa da Morte.” That’s Spanish for “Coast of Death,” an eerily beautiful beach region where Dolores Leis Antelo resides.

What does she make of her big moment?

“My photo seems to have traveled far. I say it is because of the color of my hair,” she told La Voz de Galicia. 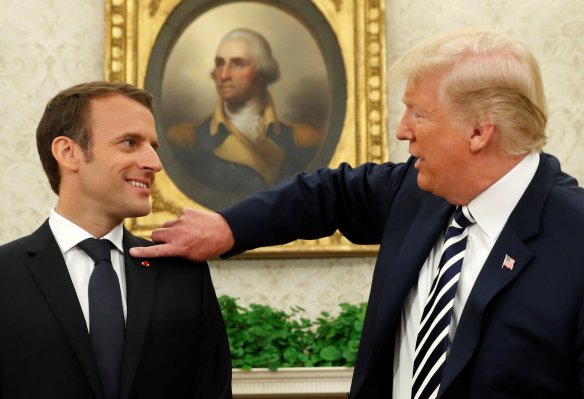 Someone Turned Trump and Macron's Meeting Into a Veep and Julia Louis-Dreyfus Loved It
Next Up: Editor's Pick