'No One Can Take Her From My Heart.' Husband of Southwest Airlines Victim Remembers His Wife

The husband of the woman who died in last week’s Southwest Airlines explosion spoke publicly for the first time Tuesday, telling CBS News his wife was, and always had been, his “guardian angel.”

Earlier this month, a Southwest plane flying from New York to Dallas was forced to make an emergency landing in Philadelphia after one of its engines exploded in midair. And though the pilot was able to guide the aircraft to safety, passenger Jennifer Riordan, 43, suffered fatal injuries when she was sucked partway through a window that had shattered as a result of the explosion.

Days after approximately 1,000 people mourned the Albuquerque bank executive and dedicated community volunteer at a memorial service, her husband, Michael, fondly remembered his late wife, saying she’s been his guardian angel since the day they met as teenagers, and adding that, “I just didn’t know it and now I do.”

The couple has two children, 12-year-old Averie and 10-year-old Josh, CBS reports. Riordan said he’ll stay strong for his kids, even as he grieves his wife of more than 20 years.

“When I have those four little eyes look at me thinking how we’re going to get through, that’s going to make me a better dad and a better husband and a better person,” Riordan told CBS. 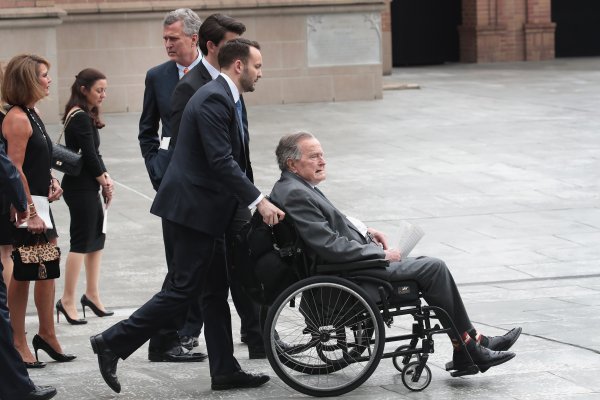 George H.W. Bush Honored His Wife in a Subtle Way at Her Funeral
Next Up: Editor's Pick