A Jewish man wears a kippa, or Jewish religious skull cap, during a meeting on "the German and French perspectives on immigration, integration and identity" organized by the American Jewish Committee (AJC) in Berlin on April 24, 2018.
Michael Kappeler—AFP/Getty Images
By Casey Quackenbush

The head of the Jewish community in Germany has urged Jews to not to wear kippahs — traditional skullcaps — due to heightened concern over recent anti-Semitic attacks.

“Defiantly showing your colors would in principle be the right way to go,” Josef Schuster, the president of the Central Council of Jews in Germany, said on Berlin public radio, according to the BBC. “Nevertheless, I would advise individual people against openly wearing a kippah in big German cities.”

Over the weekend Chancellor Angela Merkel denounced what she characterized as “another form of anti-Semitism,” saying threats were coming from both right-wing groups and some Muslims refugees in the country, BBC reports.

His remarks come ahead of the ‘Berlin Wears Kippah’ march on Wednesday, which was organized in response to the assault.

Other Jewish organizations, however, advise a different approach.

“We must take up this fight and be visible again in public,” a spokesperson for the Berlin-based Jewish Forum for Democracy and Against Anti-Semitism said, according to the BBC.

Most Popular on TIME
1
Barron Trump's School to Stay Closed Amid COVID-19
2
Pelosi Says She Has No Confidence in Dr. Birx
3
Republican Renomination of Trump to Be Held in Private 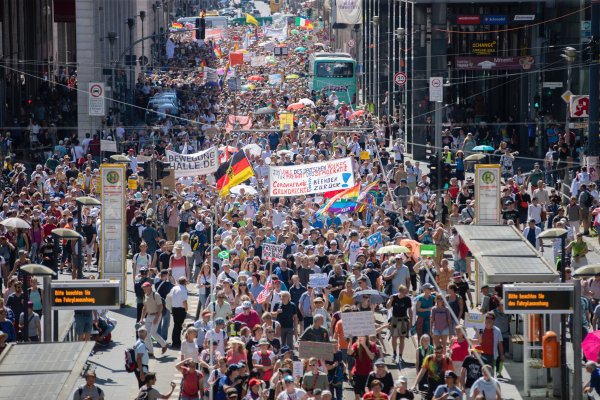