How the Avengers: Infinity War Post-Credits Scene Sets Up the Next Big Marvel Movie

Let’s start with some background: Samuel L. Jackson’s Nick Fury has been missing from the Marvel Cinematic Universe for years. The former head of S.H.I.E.L.D. used to show up in every Avengers film to band our heroes together and direct the fight against whatever alien invasion or crazed robot they faced. Maria Hill (Cobie Smulders) was often by his side. But the two were conspicuously missing from Captain America: Civil War and Infinity War — until the post-credits scene.

At the end of Infinity War, Thanos fulfills his genocidal — if environmentally friendly — plan to destroy half of all life in the universe and resolve his over-population concerns. Half of the superheroes in the Marvel Cinematic Universe disintegrate along with billions of others.

In the Avengers: Infinity War post-credits scene, Fury and Hill are driving in New York City when they receive an alert of alien activity in Wakanda. (Apparently Iron Man didn’t bother to call Fury when he heard that Thanos was on his way to Earth.) A car crashes in front of them on the street, and they get out to check on the driver only to find that there is nobody in the driver’s seat.

Hill disintegrates, and Fury reaches for what looks to be a pager or old school smartphone. As he presses the buttons, he begins to disintegrate himself. He groans, “Motherf—er” as he floats away, and the device drops to the ground. The camera zooms in to the device which reads “sending” before a yellow star symbol on a red and blue background pops up — Captain Marvel’s logo.

As comic book fans already know, the hero wears a uniform with a yellow star on a red and blue background. Fury was trying to alert her about the alien invasion before he died, and it looks like the message did indeed get through. We can expect Captain Marvel (played by Brie Larson) to fly down to Earth and offer the Avengers renewed hope.

But before Avengers: Endgame premieres, Captain Marvel lays out her origins in her own solo film. The movie, set in the 1990s, also stars Nick Fury. The two befriend one another, and before Captain Marvel leaves earth to help a refugee alien race find a new home, she tricks out Fury’s pager and tells her to contact her “only in case of emergencies.”

Captain Marvel, a fighter pilot with half-alien DNA, can fly and shoot beams from her hands. She’s ridiculously powerful, and at the end of her film is able to destroy ships and warheads just using her hands. She could kick Thor or Hulk’s butt. And she’s probably familiar with Thanos and his antics: She does a lot of her universe-saving in space. Sounds like the perfect person to take on Thanos.

In the post-credits scene for Captain Marvel, the Avengers recover Fury’s beeper and store it in Avengers headquarters. They discuss who might be on the other side of the communication device when suddenly Captain Marvel appears in the room. “Where’s Fury,” she demands. Looks like she’s here to save the day. 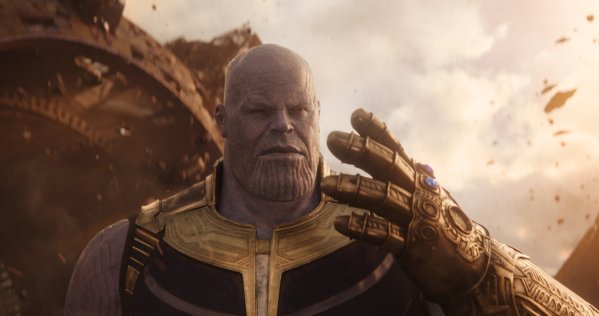 An Old Marvel Villain Makes a Surprising Cameo in Avengers: Infinity War
Next Up: Editor's Pick