How President Erdogan Is Turning Turkey Into Putin's Russia

As Turkey gears up for snap elections on June 24, the country’s president Recep Tayyip Erdogan faces a problem: Turkish society is profoundly polarized. Despite his efforts to build a stable majority as the foundation of his right-wing regime, his policies of demonizing centrist and leftist groups mean that half of Turkey opposes him vehemently and seems determined not to accept him as leader. He won last year’s referendum granting him sweeping executive powers with just a 2 percent margin, even though resources devoted to his campaign far outweighed the resources devoted to the campaign opposing him.

On April 18, Erdogan brought presidential and parliamentary elections forward from November 2019 to this June. And this time, he will play a smarter game—a game inspired by Russian President Vladimir Putin.

From Erdogan’s perspective, his surging authoritarianism is entirely “rational.” Erdogan has continued to extend the state of emergency enacted after the failed coup of July 2016 and has been jailing journalists, cartoonists, movie directors, and academics—simply because he wants the country’s educated and creative elites to pack their bags and leave.

The Turkish leader wants to drive out the educated and business classes that fervidly oppose him, the same way Putin pushed out educated and wealthy citizens in Russia. Over the last 18 years, Putin has stripped the Russian opposition of its leaders, forcing many of Russia’s thinkers and civil society organizers into self-imposed exile overseas. Erdogan believes driving out the leaders of Turkey’s civil society will pave the way for Putin-style landslide electoral victories against a hollowed and rudderless mass.

Among its population of 80 million, Turkey has a large number of well-educated types and liberal urban professionals. They often speak multiple foreign languages, have advanced degrees from world-renowned universities, and connections to civil society institutions in the West. Erdogan knows that an opposition led by powerful elites poses a permanent threat to him. If he can force this group to give up on Turkey, it does not matter how many people are left to oppose him. Without their guiding elites, the opposition groups will have no choice but to accept his regime—as Russian masses have done under Putin.

Harassment of academics has become a signature trait of Erdogan’s rising authoritarianism. Distinguished professors now find themselves fired; some have even had their passports revoked. Many are leaving, while they still can, for academic freedom abroad.

Like their professors, Turkish students are flocking away. In my recent visit to the U.K., I met an alarming number of Turkish graduate students at Oxford University who had recently left Turkey and were seeking to stay for the long run. According to the U.K. Home Office, toward the end of 2016, Britain saw a 28 percent increase in short-term student visas, with Turks making up 40 percent of this bulk.

The wealthy—many old-money Turks who espouse liberal values—are also in Erdogan’s line of fire. Prominent Turkish businessman Osman Kavala, who has supported many civil society causes, was jailed in October 2017. It was a clear-cut signal to Turkey’s wealthy: Stay quiet, receive jail time, or leave.

That trend had already begun. In 2016, Turkey was among the top five countries globally to experience the highest outflow of millionaires. While around 1,000 millionaires left the country in 2015, this figure rose to nearly 6,000 by the end of 2016, representing an unprecedented 500 percent increase from the year before. CS Global Partners, a London-based legal advisory firm that specializes in relocating families globally, geared towards more wealthy clients, said requests from Turkish clients for assistance in acquiring a foreign passport have risen 2.5-fold between January to June 2017. The flight of the elites from Turkey increasingly looks starkly like the situation in Russia in past decades.

Turkish R&D has suffered significantly as a result of these trends. For instance, in 2015, three Turkish public universities were ranked in the top 200 by the Times Higher Education rankings, but none of them made it to the list in the following year. The number of scientific publications annually has decreased by a disconcerting 28 percent in 2017 compared to 2016.

These developments are ironic because they run counter to Erdogan’s agenda. Romanticization of the collapsed Ottoman Empire continues to shape Turkey’s view of its place in the world. Nations that were once great empires often have a malleable, exaggerated sense of their glory days, and a readiness to be inspired (or even a vulnerability to manipulation) by effective politicians.

Erdogan has adopted as his mantra the theme of making Turkey great again. To his credit, the Turkish leader has made strides towards that goal, by delivering economic growth. When he came to power in 2003, Turkey was country of mostly poor people. Now it is a country of mostly middle-income citizens. Nevertheless, Turkey is still an emerging economy and desperately needs to become an advanced economy, sporting high incomes, before Erdogan can claim true greatness for his country.

Turkey can only do this if educated and wealthy citizens stay in the country. They hold the potential to transform Turkey from an economy that exports cars (a chief export) into one that is a hub for software, IT, finance, and services—in other words, a high-powered, information-based economy.

But Erdogan’s policies are having the opposite effect; capital and creative classes alike are fleeing the country. Erdogan cannot rely on international money or talent as substitutes: Nobody wants to live or do business in a country where YouTube and Twitter are periodically banned.

If Erdogan gets what he wants, he might be able to retain a Putin-like grip on power and win the June elections with a landslide. But at that point, he will have also stripped Turkey of its best and brightest. Then his country will sadly be like Russia in more ways than one.

Cagaptay is a fellow at The Washington Institute for Near East Policy and author of The New Sultan: Erdogan and the Crisis of Modern Turkey. 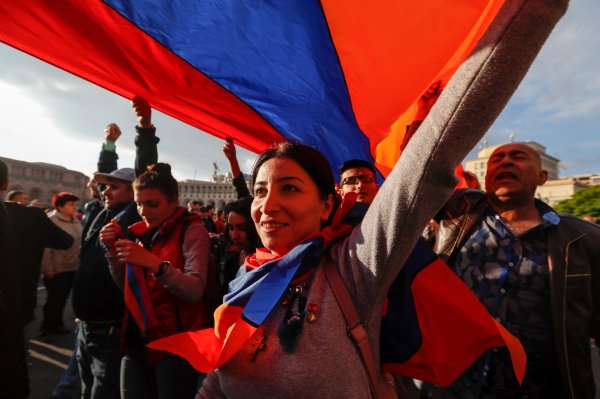 Armenia's Prime Minister Resigns After Days of Protests
Next Up: Editor's Pick