Louisville quarterback Lamar Jackson answers questions from the media during the NFL Scouting Combine on March 02, 2018 at Lucas Oil Stadium in Indianapolis, IN.
Robin Alam—Icon Sportswire/Getty Images
Ideas
By Russell Okung
Okung is an Offensive Tackle for the NFL’s Los Angeles Chargers, won Super Bowl XLVIII, has been selected to the Pro Bowl twice and is an NFL Players Association Executive Committee Member.

If we have learned anything about the NFL and its surrogates in the media lately, it’s that athletes who feel empowered to speak for themselves — without prior approval — will either be mitigated or punished. That’s part of why I’ve been following the story of Heisman Trophy winner Lamar Jackson — and the young quarterback’s fiercest advocate, mother and sports representative, Felicia Jones — as he bucks the status quo by declining to hire a traditional sports agent. Heading into the NFL draft, which begins on April 26, Jackson is poised to change both his personal and family’s realities, as it seems he will sign a first-round draft pick contract. He also stands to make a sizable contribution to the ongoing and much-needed reformation of the NFL’s inequitable power dynamics and economic engine.

Take, for instance, Jackson’s decision to decline to run the 40-meter dash for NFL scouts. Jackson is the fastest quarterback the NFL has seen in a long while. It’s obvious. And yet you can almost hear the collective dismay of league officials and team decision-makers, flabbergasted at the audacity of a player and his mother who might just understand the business side of his talent better than those who designed the system. They made an intentional, strategic decision custom-tailored to Jackson’s individual abilities and contract desires. The fact that a conventional sports agent would have rarely advised a client to do anything as off-script offers rich insight into why the one-size-fits-all approach to sports representation that the NFL tries to demand can potentially result in the athlete’s own best interest not even being the highest priority.

When I announced plans to represent myself in July 2015, I remember the experience that followed for a year and a half. I was constantly maneuvering and positioning myself in a way to establish credibility among the NFL powers that be. That was what I signed up for by declining to hire an insider who was already familiar with the front-office staff of teams throughout the league.

The beginning of my self-representation journey was rough, and despite now being satisfied with the end result, I certainly learned some valuable lessons along the way. Overall, I was most struck by how threatening my desire for self-representation was received by some, and how some of the tactics ended up discouraging other players from attempting to be self-directed free agents. I hope Jackson helps change that.

There is an unmistakable implication in the other assertion that teams are struggling to get ahold of the quarterback: that Jackson and Jones don’t know what they’re doing. This framing reinforces the coercive narrative that younger athletes who are weighing their options should depend on the professional sports agent industry to decide what is best for them. This has become an insidious grooming technique that follows the athlete throughout their professional sports career.

As someone quite familiar with the workings of the NFL, I see a different way of interpreting the storyline that organizations are unable to reach Jackson: that the teams don’t know what they’re doing or are pushing a narrative that benefits them. If teams can send out private investigators and scouts to record, follow and document the character of a player they are interested in drafting, I don’t see how they are unable to get in touch with Jackson. The man’s DMs are open. And maybe Jackson just doesn’t want to talk with the teams complaining.

I recognize that the industry of professional sports agents has some redeemable elements. In fact, I believe that the scarcity of player self-representation actually prevents some of the best sports agents from proactively adapting to these changing realities. Imagine what it could look like for an agency to actually encourage some hybrid form of self-representation, following the lead of other industry pioneers and implementing thoughtful solutions for entrepreneur minded-athletes — or just those of us with subtle elements to our game underserved by the one-size-fits-all approach. More and more of us are finding our voice and discovering ways to exchange notes. This is a necessary evolution as the status quo begins to expire.

Self-representation isn’t for everyone. But we need to normalize it, because the system as it exists now reinforces the disempowerment of athletes, which itself is fueled by a narrative that suggests we couldn’t possibly understand what’s in our own self-interest. This has negative downstream ramifications, as people generally expect athletes to remain in their proverbial box and stick to the script. They are content with us performing on the field, yet struggle to accept the fact that we are more than just jocks. Just ask Colin Kaepernick or Eric Reid. We are allowed to play, providing fans an entertaining escape from their “real world,” while we are prevented from making society confront ours. Lamar Jackson is representing a world in which his assertion matters.

In case this finds him, here are some of the things that I learned from my own experience and that I wish I would have known (and that I personally assume Felicia Jones is already aware of) as a self-representing athlete:

Good luck in the draft, Lamar. I’m available if you need me. My DMs are open, too. 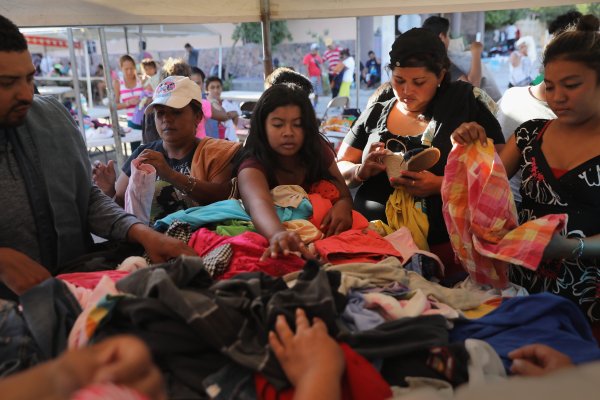 The Lonely Fight to Protect Refugees Fleeing Central America
Next Up: Editor's Pick