'Detroit: Become Human' Forces You to Make Hard Choices — As an Android

By 2038, robots have replaced people in most common jobs. Aside from a glowing circle that sits near their temple, they would be almost completely indistinguishable from the living, breathing people they were crafted to look like. It should come as no surprise, then, that it was only a matter of time until they begin doing things they haven’t been programmed for — slowly but surely gaining sentience and giving way to an uprising. Androids run the world, and humans are just living in it.

That’s what life is like in the city of Detroit 20 years in the future in Detroit: Become Human, a new game from studio Quantic Dream launching on May 25 for the PlayStation 4. Become Human, developed by the same studio responsible for cinematic adventure games Heavy Rain and Beyond Two Souls, centers on the lives of three androids: Kara, Markus, and Connor. You control all three robots at different points in the game, watching as their storylines gradually converge. At its core, Detroit: Become Human aims to tackle the difficult question of what happens to the world as a new class of super-humans that don’t need to sleep and never get sick begin to emerge. As the player, your decisions influence nearly every aspect of the game.

In one scenario, I played as an android named Markus, who is owned by an elderly wheelchair-bound painter named Carl Manfred. Markus serves as Carl’s caretaker: he administers Carl’s medication, cooks and serves Carl his meals, and assists with other household tasks. Their relationship seems straightforward, but the situation changes when Carl asks Markus to do something he wasn’t designed to do: create artwork of his own. As the player, it’s up to you to choose how Markus navigates the situation and decide what his painting says about his outlook of the world.

Read more: How the New God of War Game Was Inspired by Real-Life Parenting Challenges

In a more high-stakes scenario, I played as Connor, an android who has been tasked with saving a young girl taken hostage by a rogue android. This involved searching the area for clues and making decisions about how to best approach the android, including what to say and how to say it. Do you want to empathize with the android? Should you reassure him that everything will be O.K. if he lets the girl go, or do you want to be more realistic about the consequences of his actions? These are the types of decisions you’ll have to make.

Even after playing Detroit: Become Human for only a brief time, it’s evident that there’s a huge struggle between humans and androids in terms of the roles they assume in this new world. When Connor shows up to save the child from the android abductor, for example, a woman assumed to be her mother becomes understandably distressed when she realizes an android was sent to save her daughter, instead of a real human. Similarly, Carl’s son Leo accuses his father of loving Markus more than him in one scene in which Carl refuses to give his son more money. It’s clear that this dynamic is bound to play a significant part in the game’s story.

Like Quantic Dream’s previous releases, much of the gameplay in Detroit: Become Human is done through the use of quicktime events, or on-screen prompts that tell the player which buttons to press in order to complete an action. Based on my brief experience playing the game, nearly everything short of actually walking must be done in this way: painting a canvas, setting a package down on the table, opening a door, and so on. What’s different about the way quicktime events are done in Detroit: Become Human, however, is that instead of pressing one of the action buttons, the game asks you to move the right analog stick in a particular direction.

I found this to be a bit confusing at first; I would sometimes accidentally move the camera by pushing the right stick instead of completing the requested action. It also seemed like my response to each quicktime event would only work if character was perfectly lined up with the command being shown on the screen. That being said, I did get the hang of the controls after playing through Connor’s segment, but it’s worth noting that this took some getting used to.

Detroit: Become Human gives you plenty of freedom to explore and examine the environment, but does provide some guidance to ensure that you remain on track to complete your current objective. When I tried to access other parts of the apartment I had been investigating while playing as Connor to learn more about the kidnapper, for example, the game blocked off certain areas until I had completed the next step in the mission.

Read more: Review: Nintendo’s Labo Kits For the Switch Will Make You Feel Like a Kid Again

Although Detroit: Become Human sounds like a science-fiction story, it doesn’t really look like one. Aside from humanoid robots, Quantic Dream’s depiction of a futuristic city seems to be void of other sci-fi clichés like flying cars or meal replacement pills. Detroit in 2038 is much more in tune with our current world, making the game’s universe feel a bit more like that of Black Mirror than The Jetsons. This was intentional, according to game director and Quantic Dream founder David Cage, who says he spoke with artificial intelligence experts to pinpoint specific technologies that will actually be feasible in the near future.

Detroit: Become Human isn’t a game that you want to play so much as one you’re excited to watch. As the player, you almost feel like a bystander watching as your world gradually starts to unravel, at least during the portion I got to play. It’s not so much about what’s happening to your character as it’s about what’s happening to the people and androids around you. In a sense, Detroit: Become Human is a little like the popular HBO series Westworld and Alex Garland’s Ex Machina. All three attempt to tell their story from the android’s perspective, or at least create some empathy for them. While your missions will sometimes consist of mundane everyday tasks like making breakfast or cleaning the garage, don’t be fooled. There always seems to be a larger story unfolding in the background. 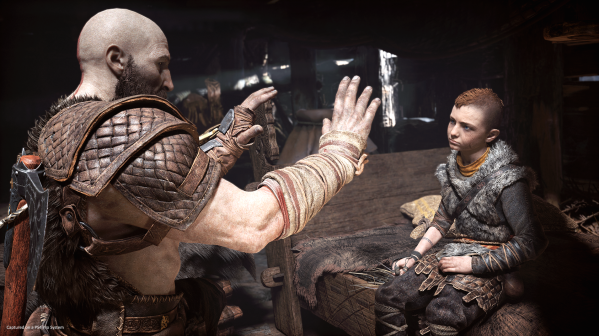 How the New 'God of War' Game Was Inspired by Real-Life Parenting Challenges
Next Up: Editor's Pick