It’s a big day in the U.K., as Catherine, Duchess of Cambridge has officially given birth to her third royal baby. Even author J.K. Rowling has her eye on the news — and also has a scorching-hot take for all reporters and news stations out there trying to find a novel angle to cover the announcement of Kate Middleton’s new infant.

“Listening to CNN talking about #royalbaby3 and the reporter said ‘Prince Harry’s route to the throne just became more difficult’ as though it’s an open secret he’s planning to systematically slaughter his closest relatives,” Rowling tweeted drily on Monday.

Following the birth of this child, Prince Harry is now fifth in line for the throne, after his father Prince Charles, his brother Prince William, his nephew Prince George, niece Princess Charlotte and the yet-to-be-named new royal nephew.

Rowling seems to be glued to the TV, as she had a follow-up comment on the names being bandied about in the coverage, too. One of the anchors apparently is “rooting for ‘Severus Albus'” which is the name Rowling bestowed on her famous character Harry Potter’s son. (He’s the main character in the play Harry Potter and the Cursed Child, which just kicked off its stateside run on Broadway. Rowling attended the New York City opening night on April 22, which might explain why she’s watching U.S.-based CNN while the royal birth coverage rolls out) For Rowling, it’s all a bit much.

Her followers also had plenty to add to the conversation. 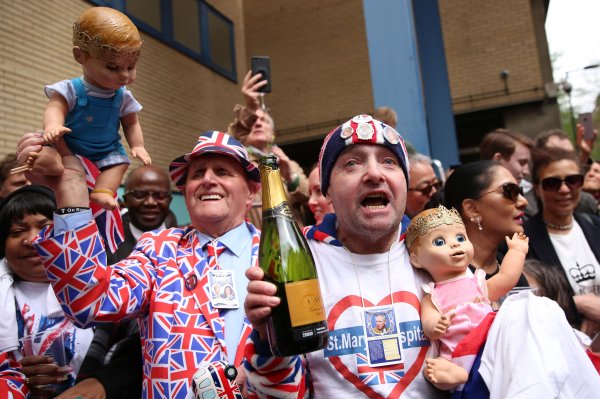 The Royal Baby Was Born on St. George's Day. Here's Why That's Significant
Next Up: Editor's Pick