George H.W. Bush Honored His Wife in a Subtle Way at Her Funeral

Former President George H.W. Bush paid a subtle tribute to his late wife, Barbara Bush, at her funeral on Saturday.

The former president wore a pair of socks decorated with stacks of colorful books, in a nod to his partner’s longstanding commitment to advancing literacy.

The Barbara Bush Foundation for Family Literacy, which the former first lady founded in 1989, is dedicated to enhancing educational opportunities for people of all ages. It has contributed more than $110 million to literacy programs in all 50 states, plus the District of Columbia. Barbara Bush, who has written multiple books herself, served as honorary chair of the foundation until 2012, when she handed over the reins to her daughter, Dorothy Bush Koch.

Barbara Bush’s funeral took place at St. Martin’s Episcopal Church in Houston on Saturday, a day after thousands of people stopped by to pay respects during a public viewing. The service was attended by former presidents Barack Obama and Bill Clinton and First Lady Melania Trump, in addition to the Bush family and about 1,500 other guests. 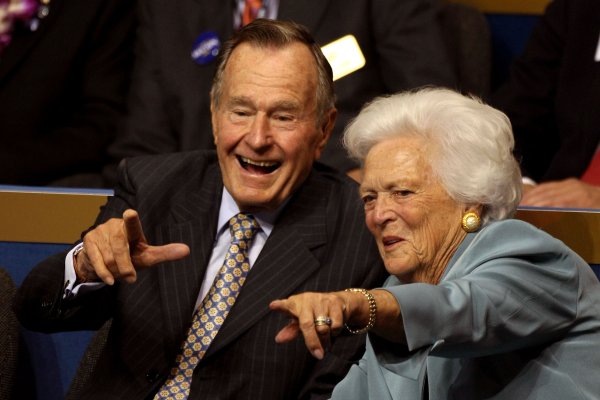 'Cross the Bushes Off Your Worry List.' George H.W. Bush Honors Barbara Bush, 'The Enforcer'
Next Up: Editor's Pick