Colin Kaepernick may not have a job on the football field, but much of the world is still cheering for him.

Amnesty International, the global human rights organization, gave Kaepernick its highest honor — the 2018 Ambassador of Conscience Award — in Amsterdam on Saturday. Past winners of the award, which “celebrates individuals and groups who speak out for justice,” include former South Africa president Nelson Mandela, Malala Yousafzai, the education activist from Pakistan who survived an assassination attempt by the Taliban, and rock group U2.

The organization recognized Kaepernick for his protest against police violence: his action, kneeling during the national anthem before NFL games, sparked a movement replicated across America and the world, starting a debate about free speech and patriotism that was inflamed by the President of the United States, one of Kaepernick’s most relentless critics.

“When high-profile people choose to take a stand for human rights, it emboldens others,” says Augusta Quiney, Amnesty International’s director of Art for Amnesty, a program that works with artists and entertainers on human rights activism. “For us, this is an opportunity to be on the right side of history.”

“This is an award I share with all of the countless people throughout the world combating the human rights violations of police officers, and their uses of oppressive and excessive force,” Kaepernick said in statement released by Amnesty International. “To quote Malcolm X, when he said that he, ‘will join in with anyone — I don’t care what color you are — as long as you want to change this miserable condition that exists on this earth,’ I am here to join with you all in this battle against police violence.

“While taking a knee is a physical display that challenges the merits of who is excluded from the notion of freedom, liberty, and justice for all, the protest is also rooted in a convergence of my moralistic beliefs, and my love for the people,” said Kaepernick. His former teammate Eric Reid, who knelt in solidarity with Kaepernick during the anthem — and remains unsigned as a free agent this NFL offseason — presented Kaepernick with the award.

Quiney points out that this summer marks the 50th anniversary of the 1968 Mexico City Olympics, where U.S. track stars John Carlos and Tommy Smith raised a fist on the medals stand to protest Civil Rights abuses in America. Activist athletes like Carlos, Smith, and Muhammad Ali, who refused to serve in Vietnam and spoke out against the war there, faced consequences for their actions: Carlos and Smith were vilified and received death threats, Ali was stripped of his titles and lost the prime earning years of his career.

Kaepernick is a successor to the 1960s activist athletes, says Quiney. Despite superior credentials to many quarterbacks signed to contracts by NFL teams, Kaepernick has not played in the NFL since the 2016 season. This month, the Seattle Seahawks reportedly cancelled a workout with Kaepernick when he refused to say whether he’d continue to kneel during the anthem.

The protests have likely cost Kaepernick his playing career. He has filed a collusion suit against the NFL, and this week NFL commissioner Roger Goodell was deposed in the case.

Kaepernick has received several honors for his stance. In November Sports Illustrated named Kaepernick winner of the Muhammad Ali Legacy Award, and in December, the ACLU gave him the Eason Monroe Courageous Advocate Award. Now, with Amnesty International, a global group has recognized Kaepernick.

“People have a choice in their everyday lives whether to act on their conscience, or carry on as usual,” says Quiney. “We rely on people like Colin, when they feel like they simply cannot be silenced, to speak out and inspire huge numbers of people, despite the professional and personal risks.” 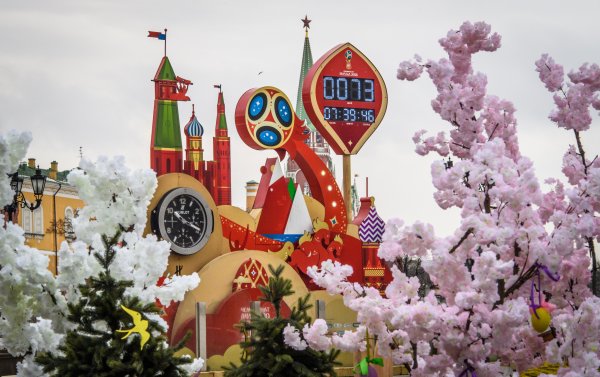 Everything You Need to Know About the 2018 World Cup
Next Up: Editor's Pick