Welcome to the era of Westworld Season 2, where creepy drone hosts are here to make life even more stressful.

Yes, Westworld Season 2 will bring something new and dreadful to the table, because all that impending doom was apparently insufficient. And that new something is its drone hosts, one of the major new revelations of the new season, which the show’s creators have titled “The Door.”

Judging from the official images released so far, these ominous new bots look like they’re bringing everyone’s favorite sci-fi drama into horror territory. In Season 2, Bernard (Jeffrey Wright) will encounter them for the first time. He’s clearly puzzled by them, and viewers have a lot of questions too.

Here’s everything we know so far about the drone hosts in Westworld Season 2.

How are the drone hosts different from hosts we met in Season 1?

Unlike regular hosts like Maeve (Thandie Newton) and Teddy (James Marsden), who look like regular folks you could split a bottle of top-shelf whiskey with, these hosts appear far less advanced. Judging by appearances, they have no skin, no faces, no muscle tissue. From the way they move and look, they seem much more like mindless slaves than the humanoid robots. They’re weird, all right.

So where are the drone hosts, exactly?

All of these creepy creeps are creeping around in the park’s laboratories, where it would seem only the engineers with the weirdest gigs ever go. So guests are unlikely to meet them unless they break out somehow.

Are they brand new?

No. In an interview with Entertainment Weekly, Westworld creators Jonathan Nolan and Lisa Joy explained that we’ve never seen them before because they’re part of a top-secret project.

“The drone hosts relate to the corporation’s secret project which is hidden in plain sight in this park. As we talked about in the pilot, the park is one thing for the guests, and it’s another thing for its shareholders and management — something completely different. We’ve used the Google analogy — for consumers, it’s for search and email, yet for the company, it’s for advertising,” Nolan told EW.

Sound eerily familiar? You may recognize Nolan’s quote from Season 1. It’s the exact same dialogue from season one of show. Theresa Cullen (Sidse Babett Knudsen) gave this cryptic spiel about the park being different things to different stakeholders to Lee Sizemore (Simon Quarterman) at The Mesa. Of course, she didn’t let him in on the real agenda. And we’re no different.

Does Bernard know what they are?

Surely, Ford’s (Anthony Hopkins) right-hand man would be in on all the park’s masterplans. But according to Nolan, he is meeting them for the first time. Or at least Bernard thinks he is, because Bernard’s memory has been wiped so many times already.

“There is an agenda here that Delos has undertaken for a very long time,” Nolan explained to EW. “As Bernard is making his way through the wreckage of the fallout from the first season, he’s discovering things about the park that even he doesn’t know and coming upon creatures like the drone host.”

How are they interacting with guests?

During the Westworld Season 2 opener “Journey Into Night,” Bernard has a question for Charlotte Hale. “Are we logging records of guests’ experiences and their DNA? ” She refuses to have the conversation, but it’s pretty much confirmed. The drone hosts, it would seem, can read genetic code. So what does Delos want with guest DNA anyhow? It’s still unclear.

How is Delos is spying on the guests?

Based on the Season 2 premiere, it appears that Delos is getting the data through the hosts’ eyes, and then the drone hosts are extracting the footage from the weird-looking “balls” inside the cavities of their host heads. That’s how the technician salvaged the video of Dolores when he removed the hardware from the “brain” of the host on the beach.

We also see a drone host swipe the privates of another host, which can only mean that “private” time with one of the park’s temptations is not actually private as long as Delos is in charge.

Should we be scared of them?

It’s unclear whose side they are on exactly, but how could they be nice guys? For one thing, based on the pictures, the faceless slow-walkers don’t respect personal boundaries. We already know that one appears to throw Bernard against some kind of heavy machinery in the trailer. They don’t seem to bode well for the future of our friends at Westworld. 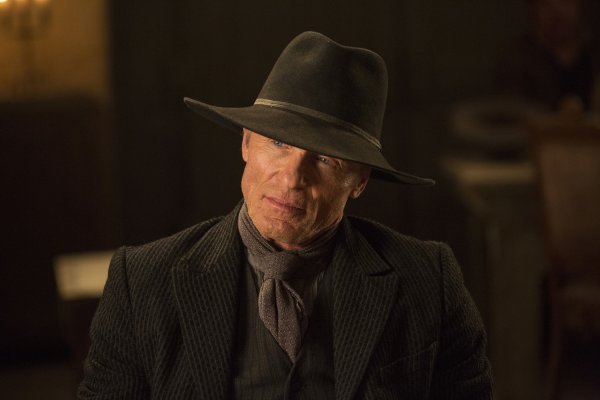 How Westworld's William Evolved Into the Man in Black
Next Up: Editor's Pick