Why Young Americans Are Increasingly Moving to Small Towns

Since 2013, James and Deborah Fallows have traveled through smaller-town America, reporting on cities that had faced economic or other challenges and had devised responses. One of their findings is about a new trend in migration, of ambitious young people looking for alternatives to big-city coastal life.

Through the past few generations, many people have assumed that the more you aspire to first-rate achievement (and rewards), the more you have to decide to live in a handful of coastal centers. New York for finance, San Francisco and Seattle for technology, Washington, D.C., for politics, Los Angeles for entertainment, and so on.

But across the country, a discernible reverse sort is under way. It is driven not by retirees or people who found that they couldn’t cut big-time competition but, rather, by younger people who have decided that the balance of life and work is more attractive in Columbus, Ohio, or Greenville, South Carolina, or Sioux Falls, South Dakota, than in Los Angeles or New York. The difference in real estate costs is a fundamental and under-appreciated part of this shift. In the biggest cities, personal and business decisions turn fundamentally on the cost of real estate. In many smaller towns, much lower costs for apartments, homes, office space, or art studios make more possibilities open.

But there are other attractions too. Here are examples from the otherwise very different cities of Duluth, Minnesota, on the shore of Lake Superior, and Fresno, California, in the heart of California’s agricultural Central Valley.

“There was this attitude around Duluth that nothing’s any good,” Gary Doty, who had been mayor of Duluth in the 1990s, told us, about the days when he was growing up in the city and beginning his teaching career. “We’re this little city stuck way to the north, far away from the Cities” — he was using the Minnesota term for the Twin Cities, Minneapolis and St. Paul — “and we’re just going to have to plod along.”

Now Duluth is a major aerospace center, based on the success of Cirrus aircraft, and at least as successful as an outdoor-recreation attraction, winner of a recent unscientific but indicative Outside magazine poll for “Best City” for recreation.

With these changes, Doty said, “people started saying, ‘We’re not that bad!’ People would come up here to look around and say, ‘Wow!’ this was a gem they weren’t aware of ” — including, he emphasized, young families and entrepreneurs.

The Benson brothers of Duluth, Dave and Greg, illustrate the entrepreneurial movement. If you saw them in Southern California, you might think they were surfers — shaggy-haired, rangy, weathered. Instead their sports were instead the northern plains variants: skiing, ice-skating, and skateboarding. After making a start in business with a company making outdoor skateboard parks, they expanded to create a furniture works called Loll, then a kitchenware company called Epicurean. From a factory on a wooded hillside outside Duluth, they ship products to customers in 60 countries around the world.

Once you step inside the door-way, you’re in an environment that the hippest firm in San Francisco or Brooklyn would envy: recycled timber, taken from the frigid depths of Lake Superior, for the walls, staircases, and beams; one whole wall of glass, looking out on the woods, and bright, open workspaces.

“Ten years ago, there weren’t many start-ups in Duluth,” Dave Benson told us. “Now it’s buzzing.” If you saw this operation in San Francisco or Seattle, you would think: “Of course!” Why here? “Because we just like the quality of life,” Dave Benson said.

Another influential startup in Duluth is the Bent Paddle brewery, which has become one of the largest in the state. “A lot of people who grew up here, or got to know it from college, they would love to stay here, but they feel that they have to leave,” Karen Tonnis, one of four founders, said. “But now we’re seeing young entrepreneurs who went to college here and say, ‘I love it, I’m going to stay, and I’m going to figure out the way how.’ And I feel like there’s suddenly more of a diversity of job opportunities here, as people embrace the history of Duluth and become proud of its possibilities.”

In places from West Virginia and Mississippi to the rural West, individuals and communities in smaller-town America can be acutely aware of being looked down on by big-city fashionable America. Sometimes that condescension is spirit-breaking. Sometimes it is motivating.

“Solving problems anyplace is valiant, but if you can solve them in Fresno, you can solve them anywhere,” an entrepreneur named Jake Soberal, then in his early thirties, told us during our visit to the largest city in California’s farming-dominated Central Valley.

Soberal grew up in nearby Clovis, went east for college, and worked as a big-city lawyer. He told us that when he was commencement speaker at his graduation from Clovis High School, “I can distinctly remember sitting up there, this arrogant eighteen-year-old, thinking, you know, these folks really ought to enjoy this speech because they’ll never see me here again.”

But he came back to Fresno to try to develop Fresno’s own technology businesses and also to train its community-college and non-college populations for better opportunities in the tech world. “If this project can work right here,” he said, “in the middle of a lot of the biggest challenges facing American cities, what might it do elsewhere?”

Another young Fresno resident, Derek Payton, had worked for or helped found a variety of tech companies in the area. What would be a realistic ambition for Fresno, in Payton’s view? “It would be, when you think of tech in California, you’ll think of the Bay Area, L.A., San Diego — and Fresno,” he said. “There’s definitely strong tech potential here.”

Jake Soberal said that Fresno was on the way up — the way back — and asked, “What’s the main thing making Fresno better? I believe that we have a generation of young people who do not want to adopt their parents’[downbeat] view of this place. Increasingly we’re able to count among those young people some of our most talented. Whereas before Fresno was famous for losing those people.”

The generation gap in attitude was something we heard in Fresno, as in Duluth — and many other places as well. His contemporaries, according to Soberal, “don’t care what Dad might think about Fresno. They say, ‘There is real data that makes me excited about what I can do right here. I can open a restaurant here, I can get a house here, I can build a company here. I don’t care that you think Fresno sucks.’” 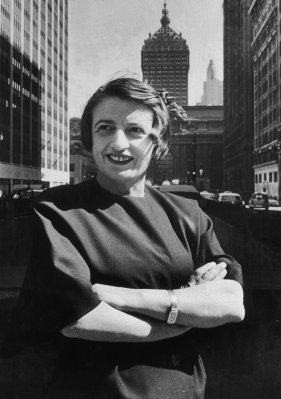 How Real History Shaped 'The Fountainhead' and Kept Ayn Rand's Fans Coming Back
Next Up: Editor's Pick