Republican Candidates Want to Focus on the Economy. But Donald Trump Keeps Getting in the Way

A man fills walks past voting signs displayed outside a polling station during the mid-term elections November 4, 2014 in Hamtramck, Michigan.
Joshua Lott—Getty Images
By Alana Abramson

Republicans running in Congressional elections this year just want to talk about the economy. But they have one glaring obstacle: their own President.

As GOP lawmakers gear up for the midterm elections, both candidates and outside groups have already worked up scripts for campaign ads that would tout the December tax reform and the low unemployment rate. But strategists worry that the message will be drowned out by President Donald Trump’s dominance of the daily news cycle.

“The economic messaging, which is positive, is being obscured by the day-to-day back-and-forth over the latest controversy and tweetstorm, and right now that is a problem,” said Mike DuHaime, a Republican strategist who orchestrated former New Jersey Gov. Chris Christie’s campaigns and served as political director of the Republican National Committee during the George W. Bush Administration. “Whether people like it or not the voice of the GOP is the president.”

The fall elections present something of a test of how voters decide. The president’s party tends to lose seats during the first midterm election, and Trump has a lower approval rating than other first-term presidents at this point in their terms. But voters also tend to be more satisfied with the party in power when the economy is doing well – even if it’s debatable how much should actually be credited to Washington policies.

For Republicans, that means a relentless focus on the record highs of the stock market and the low 4.1 percent unemployment rate, while linking them to the tax cuts and Republican control of Washington. And polling is on their side; According to an April NBC/Wall Street Journal poll, voters prefer Republicans to Democrats when it comes to dealing with the economy, 35 percent to 28 percent. This is a reversal of fortunes from December of 2017, when the same poll found voters preferred Democrats to Republicans.

One Republican operative who has conducted focus groups with voters in states that largely supported Trump said that voters are conflicted. While they feel that their economic situations have improved since his inauguration and support his policies, many say they are repelled by the controversies surrounding him, the operative said.

Polling reflects similar sentiments; An ABC News/Washington Post poll from January found that voters gave the economy the highest ratings in nearly two decades. Trump, by comparison, had a 36 percent disapproval rating. – by April 2018 this had increased to 40 percent. But in 2010, the polling was nearly flipped. In April 2010, Obama had a 54 percent approval rating, but 73 percent of voters said they were “very worried” about the economic direction of the country.

For a president in relatively prosperous economic times to be this unpopular is “uncharted territory,” the operative added.

Experts say that the economy takes a backseat in off year elections, in comparison with Presidential elections, when it is a top factor. This time, they warn, that dynamic may be exacerbated by the deluge of news from the White House.

“He’s unpopular despite the good economy; that ought to tell us something,” said Robert S. Erikson, a Professor of Political Science at Columbia University. “That overrides the effect of the economy in terms of his popularity. It’s also going to probably going to override any growth in the economy on election day if [the approval rating] maintains that.”

Despite this conundrum, Republicans have pushed through with this agenda, testing out the economic messaging in recent special elections.

According to an analysis by Kantar Media of broadcast TV ads since Jan. 1, the top three issues for Republicans are taxes, jobs and the unemployment rate. Americans for Prosperity, the political arm of the Koch network, has already launched two sets of $4 million ads in Indiana and Missouri – two states where President Trump won by double digits – touting the benefits of the tax reform law and highlighting the fact that the Democratic Senators up for reelection voted against it. In total, the Koch network is allotting $20 million to sell the benefits of the tax law. And the Congressional Leadership Fund, the Super Pac aligned with Republican leadership in the House of Representatives, has already reserved $38 million in television advertising for this fall.

“We want to make sure that Americans understand how their lives and our economy are improving because of the tax and tax reform passed by congressional Republicans and signed into law by the President,” said Tim Phillips, president of Americans for Prosperity.

But so far, the results have not been spectacular.

In last month’s special Congressional election in Pennsylvania, GOP groups eventually pulled their ads touting tax reform and replaced them with ones focusing on more red meat issues like sanctuary cities, according to an analysis by Politico.

Terry Sullivan, a Republican strategist who managed Senator Marco Rubio’s campaign when he ran against Trump in the 2016 Republican primary, said passing tax cuts have likely helped stem even more losses, but not enough to buck the historical trend. “It it doesn’t mean they’re going to suddenly hold on to the house because we passed tax cuts,” he said.

Ultimately, Sullivan continued, the election will be about the President – and that doesn’t bode well for his party.

“He has the unique ability to suck up the oxygen and starve any coverage of other issues,” Sullivan said of Trump. 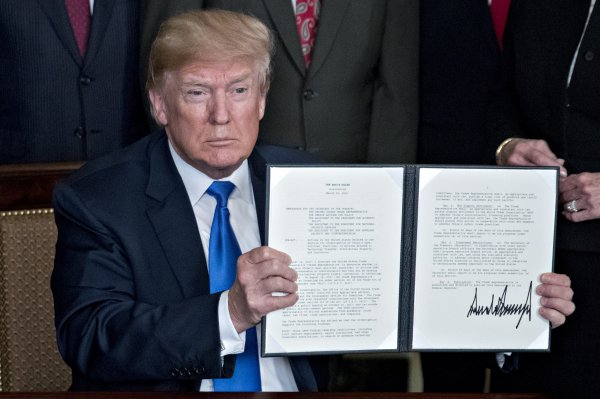 Why Trump's Trade War Could Cost Republicans the House
Next Up: Editor's Pick