How Westworld's William Evolved Into the Man in Black

In one of Westworld Season 1’s most highly anticipated twists, we find out that William (Jimmi Simpson) and the ruthless Man in Black (Ed Harris) are the same guy, separated by three decades.

And according to the Westworld Season 2 trailer, the Man in Black is determined to burn the theme park down. Whether or not he gets to fulfill his vacation dreams is anyone’s guess. But let’s pull back for a moment and remember how his character — a white-hatted good guy as pure as they come — went full black hat.

Before you dive into the Westworld Season 2 premiere on April 22, here’s a refresher on how William became the Man in Black.

When he first shows up at the park in the second episode of Season 1, William seems immune to the park’s amusements. He hops off the train as a reluctant first-timer on a business retreat of sorts. He’s traveled there with a returning visitor, Logan (Ben Barnes), his insufferable, rich brother-in-law to-be.

Recall that William did not care for Logan’s system of rating women based on their attractiveness, which Logan shared with him on the train ride in. He didn’t care for the way Logan stabbed an elderly host’s hand to the table because he interrupted their steak dinner. He turned down advances from female hosts like Angela (Talulah Riley) and Clementine (Angela Sarafyan), even though his fiancée enjoyed sex with hosts before. The guy even robbed people politely. He was different.

That all changed when William fell in love with the rancher’s daughter and the pair teamed up for an adventure into the less family-friendly danger zones of the park through Pariah and Ghost Nation. Dolores (Evan Rachel Wood) was so pure that she lassoed his heart. And William was so convinced that she could become conscious that he became her ally. They have train sex, and he’s hooked.

But then Dolores was captured by Confederate soldiers and, as far as we know, brutalized. We discover that William has a real knack for violence when Logan wakes up from an outdoor sleepover to discover that his future brother spent the evening butchering all the host soldiers. Logan is shocked by this. And William gets rid of Logan by sending him galloping away naked on a horse.

We learn about William’s transformation in a montage toward the close of Season 1. It shows that he enjoys the rest of his first stay and his mission to find Dolores. William stops at nothing to find her, and when he finally does, in Sweetwater, she doesn’t even appear to remember him. He’s really pissed about that one.

As his Westworld gaming progresses, he turns into a brutal man fixated on getting to the core of the game, mowing down any hosts in his way. We learn that his fiancée Juliet became his wife, and later took her own life. It’s enough to lead him back to Westworld again and again. For 30 years.

William is a repeat offender, and his rap sheet is long. But here’s a sampling: We learn that he is likely sexually assaulting Dolores in unseen barn scenes, and at one point, he stabs Maeve (Thandie Newton.) But perhaps most surprising of all, he kills Lawrence (Clifton Collins Jr.) He’s the sidekick with whom the Man in Black has a complicated bromance. They have some laughs, but the Man in Black ends up hanging Lawrence once he is no longer useful to him. To him, everyone is just a pawn in this game.

Oh, and then we find out that he also owns Westworld, which helps explain his entitled attitude, and why he thinks it’s appropriate to call Dr. Ford by his first name.

If the Man in Black were a host, in Westworld terms, the deeper level of this game would be his “cornerstone.” It’s what drives him. He spends a good chunk of time trying to figure out what it all means. He firmly believes the deceased park co-creator Arnold (Jeffrey Wright) hid the real mystery of the park at “the center of the Maze.” He’s wrong. The maze is really an inward journey Arnold set up for the hosts. It doesn’t even apply to him, but he’s still relentlessly obsessed with getting there.

The Real Stakes He Always Wanted

The last we see of him in Season 1 at the black tie affair massacre in the finale, he’s finding his first taste of fulfillment. The host Clementine Pennyfeather shoots him, and he actually gets injured, which thrills him to no end.

Stay tuned for his shenanigans when Season 2 of Westworld premieres on Sunday. 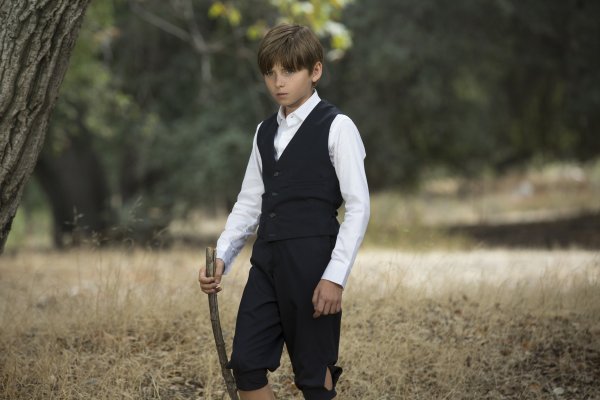 Will We See Dr. Ford in Westworld Season 2? Let's Discuss
Next Up: Editor's Pick