Meghan Markle, now the Duchess of Sussex, wore a simple, yet regal Givenchy wedding dress designed by Clare Waight Keller to her royal wedding to Prince Harry at St. George’s Chapel in Windsor Castle on Saturday.

Meghan “worked closely together” with Waight Keller on the dress design which featured a bateau neckline and 3/4 lenght sleeves. The stunning white gown was also paired with a hand-embroidered 16.5-foot silk tulle veil with flowers representing all 53 countries of the Commonwealth.

Waight Keller was an interesting sartorial selection from Meghan, given that while Waight Keller is British, she is best known for her work at prominent French fashion houses — before she took over as the first female artistic director at Givenchy, she was the creative director at Chloé.

While some pointed to her first wedding dress (a strapless white wedding dress with a sparkling waist embellishment) from her previous marriage to producer Trevor Engelson, others hoped that she might take inspiration from her late mother-in-law Princess Diana’s voluminous and iconic David and Elizabeth Emanuel wedding dress or sister-in-law Kate Middleton’s satin and lace wedding dress that was designed by Alexander McQueen’s Sarah Burton.

The royal wedding’s official website offered an in-depth look at Markle’s full wedding day dress and ensemble. Here’s everything we know about the Givenchy dress.

Waight Keller, who became the first female Artistic Director at the historic French fashion house Givenchy, was chosen by Markle to design the royal wedding dress because of Waight Keller “timeless and elegant aesthetic, impeccable tailoring, and relaxed demeanour.”

In addition to the aesthetic royal wedding dress choices, Meghan “wanted to highlight the success of a leading British talent who has now served as the creative head of three globally influential fashion houses – Pringle of Scotland, Chloé, and now Givenchy.”

Prince Harry and Meghan Markle in St George's Chapel at Windsor Castle for their wedding, May 19, 2018.
Dominic Lipinski—PA Wire

The palace said Meghan and Waight Keller “worked closely together” when designing the royal wedding dress, which “epitomises a timeless minimal elegance referencing the codes of the iconic House of Givenchy and showcasing the expert craftsmanship of its world-renowned Parisian couture atelier founded in 1952.”

Meghan’s royal wedding dress was designed with the “heritage” of the Givenchy house in mind using six “meticulously placed seams.”

“The focus of the dress is the graphic open bateau neckline that gracefully frames the shoulders and emphasises the slender sculpted waist,” the royal wedding dress release said. “The lines of the dress extend towards the back where the train flows in soft round folds cushioned by an underskirt in triple silk organza. The slim three-quarter sleeves add a note of refined modernity.”

Meghan’s wedding dress was made of a double bonded silk after “extensive research” by Waight Keller in fabric mills throughout Europe.

“Perfect for the round sculptural look required, the silk cady has a soft matt lustre whilst the bonding process and pure white colour chosen by Ms. Markle and Ms. Waight Keller bring a fresh modernity to the dress,” the wedding dress release said.

Meghan paid tribute to all 53 countries of the Commonwealth with her 5-meter long wedding veil, which represented the flowers of each Commonwealth country. Meghan also incorporated two flowers with personal meaning: Wintersweet (Chimonanthus praecox), which is grown outside her Nottingham Cottage home with Prince Harry, and California Poppy (Eschscholzia californica), the state flower from her place of birth. Meghan’s veil also included “crops of wheat are delicately embroidered and blend into the flora, to symbolise love and charity,” the release said.

The silk and organza wedding veil took hundreds of hours of sewing, and workers had to wash their hands every 30 minutes to keep the tulle and threads pristine, according to the release about Meghan’s royal wedding dress. The veil also held a sweet hidden significance for Markle, who worked with Keller to include a subtle “something blue” for her big day: a piece of blue fabric stitched inside the veil that came from the blue dress that Markle wore on her first date with Prince Harry.

In the documentary Queen of the World, Markle explains it thusly: “Did you see it? The piece of blue fabric that’s stitched inside? It’s my something blue,” Markle said. “It’s fabric from the dress that I wore on our first date.”

Meghan Markle in St George's Chapel at Windsor Castle during her wedding to Prince Harry, May 19, 2018.
Jonathan —PA Wire

“The diamond bandeau was made for Queen Mary and specifically designed to accommodate the centre brooch,” a release about Meghan’s tiara said. “This brooch was given as a present to the then Princess Mary in 1893 by the County of Lincoln on her marriage to Prince George, Duke of York. The bandeau and the brooch were bequeathed by Queen Mary to The Queen in 1953. The Bride is wearing earrings and bracelet made by Cartier.”

Meghan’s wedding shoes “are based on a Givenchy refined pointed couture design made of a silk duchess satin.” 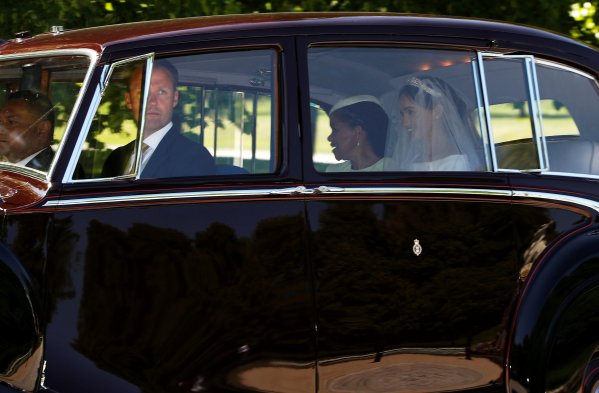 Everything to Know About Meghan Markle’s Wedding Tiara
Next Up: Editor's Pick