When a White House official suggested this week that United Nations Ambassador Nikki Haley had suffered “momentary confusion” over the Trump Administration’s approach to new Russian sanctions, she responded with a clear message to the contrary.

“With all due respect, I don’t get confused,” Haley said in a statement on Tuesday.

The retort — which earned her an apology from National Economic Council Director Larry Kudlow — was characteristic of Haley, who has a knack for responding to criticism and slights with a measured, but assertive clapback.

During the 2016 Republican presidential primary, when Donald Trump said “the people of South Carolina are embarrassed by Nikki Haley,” who was then the state’s governor, she served up some backhanded charm, tweeting, “Bless your heart.”

“I will decline the advice I was recently given by your top negotiator, Saeb Erekat. I will not shut up,” Haley said at the United Nations. “Rather, I will respectfully speak some hard truths.”

Karrin Vasby Anderson — a communication studies professor at Colorado State who has researched political rhetoric and gender — said Haley’s retorts exemplify the challenging double standard encountered by female political leaders, who must demonstrate their competence without being perceived as “inappropriately assertive.” Anderson said it’s common for women in that position to “add a polite form” when saying something strong and declarative, in order to soften its force and minimize the perception of stepping out of bounds — something men often don’t have to worry about.

“It’s also hard because you’ve got somebody like Nikki Haley, who — in a cabinet position, it is appropriate to be deferential to her commander-in-chief, but if she’s hoping to parlay that position into a later run for President or Vice President, she can’t be solely deferential,” Anderson said. “The likability-credibility tight rope is a really narrow one to walk.”

Haley has been walking that tight rope since before she entered politics. In a 2011 speech at the Center for Women in Charleston, South Carolina, Haley told a story about being the only female executive at a board meeting after becoming the accounting supervisor for FCR, Inc. She recalled that when the CEO arrived late to the meeting, the CFO asked Haley to go get him a cup of coffee.

“I knew then that how I handled that situation would define what my working relationship was going to be from there on out. And without even a second thought, I leaned over to the phone by my side, and I called my secretary, and I said, ‘Alice, would you please get Paul a cup of coffee?’And the look on their face was just blank. They got it,” Haley said during the 2011 speech. “So sometimes, it’s not what you say, it’s how you say it. It’s not what you do, it’s how you do it that makes a difference. I didn’t have to kick and scream.”

“I never had another issue with any of those men at that company,” she added. “You have to go forward with grace.” 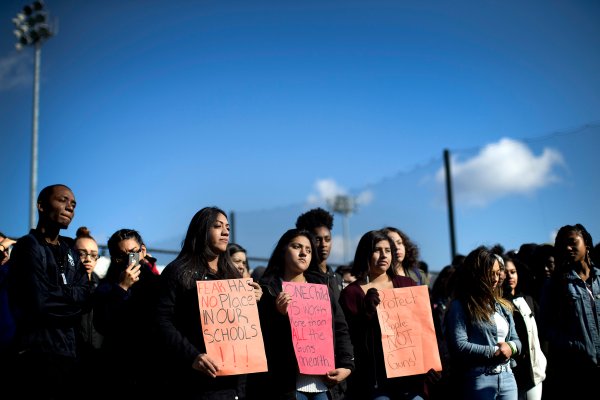 Students Walk Out to Protest Gun Violence
Next Up: Editor's Pick