The D.C. soap opera Scandal, which ends its seven-season run on ABC’s air on Thursday, outlived its own era; the series effectively ended with the election of Donald Trump. That’s because the show was so closely tied to the national mood of the Obama presidency that it became one of its defining shows. Scandal was, with respect to its plot, as close as network television comes to true madness, a melodrama in which power and murder went hand-in-hand and traded off being the defining aphrodisiac for a team of antiheroes. But its tone was carefully calibrated, enough so that it struck a chord resonant beyond its core audience.

The series began in April 2012—some months before Barack Obama’s re-election as President—as a stab at brand extension for TV impresario Shonda Rhimes, who already had Grey’s Anatomy and its spinoff Private Practice on the air. It had been inspired by real-life Washington crisis manager Judy Smith, morphed for television into Olivia Pope, played by Kerry Washington as a woman who’s driven by a rabidly competitive entrepreneurialism that extends to her love life, where the fact that her secret boyfriend (played by Tony Goldwyn) is the President of the United States is practically his entire appeal. Olivia, a libidinous capitalist, is rapaciously, vibrantly American.

Olivia was easy to root for even as she rigged an election or plotted against her masses of enemies. Part of it was Washington’s performance, rising in dudgeon at practically the same moment every episode with a thrillingly heated cadence that broke through the show’s own repetition. As a fixer, Olivia demanded loyalty from her subordinates even as she operated in a moral vacuum. Someone so exacting and so unbound by familiar ethics needed to be relatable somehow, and Washington made Olivia into someone who urgently needs to prove to others she’s right in order to persuade herself.

Part of Olivia’s appeal, though, was her pathbreaking status as the black heroine of a network drama—the first since the short-lived Get Christie Love!, which aired in 1974 and 1975. In Scandal’s wake came black-female-led network dramas including Fox’s Empire and Pitch as well as the Shondaland-produced How to Get Away with Murder, but when it debuted, Scandal was in a field by itself. And, importantly, Olivia Pope was not incidentally black but specifically black. Her affair with a white President whom she also served was written, more and more as the show was emboldened by success, to explicitly reference Thomas Jefferson and Sally Hemings. It was a pairing that was touched by the dynamics of power, and a white man in Scandal’s universe, as ours, has more of it than a black woman.

Interestingly, President Fitzgerald Grant, for whom Olivia does so much, is so flaccidly short of competent, so inept, that his reliance on Olivia seems a racial comment of its own; the white man born to rule needs a black woman to do everything for him in order to stay on the throne. Before the conversation about black women carrying the weight of the nation dawned on many white politics-watchers after the 2016 election, Olivia was laboring mightily for the Grants every week on ABC. (Before the action of the series, we learn, Olivia stole the election for Grant, a member of a political dynasty who had no excuse to lose. Late in the series’s run, she becomes his ex-wife’s White House chief of staff. Her labors for the Grants never end.) Olivia’s relationship with her father (Joe Morton, who won an Emmy for the role) was less fraught than her interactions with Grant, but only slightly; having fought his way to the top of the meritocracy, he pushed Olivia towards excellence by telling her she’d have to be twice as good to get half as much. He spurred Olivia to success while, with his understandably relentless focus on achievement over all else, placing more than a few scratches on her moral compass.

Scandal’s unique status as a broadcast-TV drama with a black female protagonist, and the way it made that protagonist a complicated woman who had real conversations about what race meant to her, was well-suited to a time in which the President was, for the first time, able to have similar conversations with the nation. The show came along at the right moment, extending a discussion that was at last happening on America’s most visible stages.

If the ideas evoked by Scandal’s treatment of Olivia and race were recognizable, though, they were alone. Scandal began its run months after Homeland and nearly a year before House of Cards; while all three shows, at first, seemed to represent a vogue for D.C.-gazing in the Obamas’ Camelot, Scandal quickly outpaced its contemporaries in pace and in sheer unrecognizability. (This was no small feat.) The Washington of Scandal had the political tactics of Putin’s Moscow and the sexual mores of the late Roman Empire. Olivia’s father, with whom she had so many frank exchanges about what it takes to get ahead, was the head of a deep-state espionage organization; her mother is an international terrorist. Fitzgerald Grant is a liberal Republican focused on immigration rights and gun control; the fact of his philandering seems to bother the public not at all, even after his mistress joins the administration of his ex-wife.

It was rare for Scandal to even pay lip service to the realities that House of Cards would feel compelled to acknowledge. Its imaginative universe expanded to allow for anything, including both banal functionaries and truly evil operators. Much as The West Wing’s early run during the George W. Bush administration allowed a liberal audience to play out a fantasy of high-minded national stewardship, Scandal’s airing during a time of relatively little real national scandal allowed viewers to play out what seemed like the vicarious fun of an unendingly churning news cycle filled with nothing but drama from Washington.

Scandal staggers to the finish line after what I’d argue has been a down season, focused on the morality of Olivia, a character whose great fun has always been that morality’s negotiability. And even though it’s off its peak and feels less urgently resonant than it’s previously been, the show’s success is undeniable. It cemented the reign of Rhimes, TV’s defining hitmaker, and made a superstar of Washington. (Notably, both Rhimes and Washington’s next acts will be on streaming TV, as ABC pivots to a heartland strategy anchored by the Roseanne revival.) And, along with Mad Men and Girls, Scandal will be on the very short list of series that defined the Obama years, both for its willingness to engage deep conversations on issues of race and its escapist vision of a world in which scandal was still fun.

And maybe, too, for its perhaps-accidental prescience. The thing is, there are no real scandals on Scandal; the word implies a public reaction of disgust and disapprobation. Scandal spends almost no time with the public, and the resolution of each case—from an untidy murder to an election swinging to the candidate the voters didn’t choose—is, as far as we the viewers can tell, acquiescence. Because everything is breaking all the time, nothing sinks in. In Scandal’s universe, the unending stream of news that might once have seemed unbelievable has become background noise. Scandal got, on some level, that occasional dramas are lots of fun but a news cycle that’s only dramas becomes endurable only by tuning out. It was a show whose time passed, in part because it saw too clearly what it’d be like to live through our own. 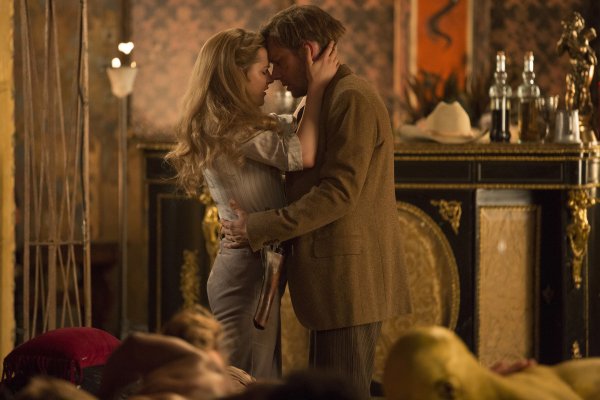 One Key Westworld Phrase to Remember When You Watch Season 2
Next Up: Editor's Pick