Review: Nintendo's Labo Kits for the Switch Will Make You Feel Like a Kid Again

It’s not every day that I get to spend an entire afternoon building a piano from scratch. But that’s exactly what happened this past Monday as I spent time digging into Nintendo’s Labo variety pack for the Nintendo Switch.

Nintendo unveiled its do-it-yourself Labo activity bundles earlier this year ahead of their official launch on April 20. Labo kits allow Switch owners to create handmade playful accessories for their console by folding and fastening cardboard pieces together. The concept sounds simple, but these playsets may very well be among the storied gaming company’s most creative products yet.

The variety pack I tried includes supplies for making five different types of accessories, which Nintendo calls Toy-Cons, named after the Switch’s Joy-Con controllers. In this $69.99 kit, you’ll find cutouts for making a remote-controlled car, a fishing rod, a motorbike, a house, and a piano. A slightly more expensive $79.99 Labo kit lets you build a wearable backpack and visor for controlling a robot on-screen.

But what’s most interesting about Labo isn’t necessarily how the cardboard toys come together, but what you can actually do with them once they’re assembled. Labo’s functionality depends entirely on how the Joy-Con remotes and Switch tablet cooperate with each other — and it’s not in the way you might expect a traditional controller and game console to work together.

In many cases, the Joy-Con serves as the eyes that make it possible for the Switch to see what’s going on when you’re playing with a Toy-Con. Take the piano, for example. Each piano key is marked with a sticker that becomes visible to the Joy-Con’s IR motion camera whenever that key is pressed, telling the Switch which note it should play. You can insert different pegs into the piano that prompt it to trigger different sound effects when the instrument is played. One such peg, for example, turns each musical note into a cat’s meow.

The house Toy-Con works in a similar fashion. Inserting different blocks into the house’s frame prompts changes to occur in the virtual room being displayed on the Switch’s screen. A new item will often appear in the space depending on which block you insert and where — once again thanks to the Joy-Con’s stickers. The controller is cleverly positioned in the chimney, giving its IR camera a bird’s eye view of the home’s interior. As such, it can prompt certain changes whenever it detects the marker stickers on the block.

In a sense, Labo is yet another indicator that Nintendo intends to use the technology inside the Switch and its Joy-Cons to encourage unconventional types of video gaming. We saw this earlier, when Nintendo premiered the party game 1-2 Switch around the time of the console’s launch. Like Labo, that game encourages players to use the Joy-Cons in creative ways, primarily by competing in mini-games that has gamers competing face-to-face rather than by staring at a screen.

The Joy-Cons may be the engine that drives the Toy-Cons (quite literally, when referring to the R/C car), but the Switch is your guide to building and playing with these cardboard models. Labo kits come with a game card that you must insert into the Switch before you can start assembling or playing with your Labo pack. The game is broken down into three appropriately named sections: Make, Play, and Discover. The Make tab includes all of the necessary videos for teaching you how to build Toy-Cons, while the Play area includes games and activities that let you put those Toy-Cons to use. For curious builders, the Discover tab provides more information about how the Toy-Cons and Joy-Cons actually work and other things you can do with them.

Nintendo is marketing the Labo towards players of all ages, but similar to LEGOs, a product like this is particularly appealing to kids. As such, Nintendo does a great job at helping you get comfortable before jumping into complex creations like the piano or the house that are comprised of several different parts. The R/C car, for example, can be made in just minutes and provides a clear overview of what to expect before diving too deeply into a project. The more complicated Toy-Cons aren’t necessarily more difficult to create, they’re just more intricate and more involved, and therefore require more time.

I learned this first hand when assembling the piano Toy-Con, which took almost an entire afternoon. If you’re planning to tackle a Toy-Con like this all in one sitting, you’ll definitely want to block off a significant amount of time. But I’d suggest assembling it in phases — it’s much more enjoyable that way, and you’re likely to do a neater job and be more careful than you would when trying to finish it all at once. Nintendo’s tutorial makes it easy to pick up from exactly where you left off, and the guide will suggest taking a break after you’ve completed an important time-consuming step.

Read more: The 25 Weirdest Gadgets of All Time

Even after just a few minutes using Labo, it became evident that Nintendo paid careful attention to detail when creating these instructional videos. They’re written and illustrated so clearly that any player — young or old, crafty or not— can assemble even the most complex Toy-Cons with ease. If you’re following the instructions carefully, it’s very difficult to mess up a Toy-Con to a point at which it can’t be salvaged.

Perhaps just as importantly, the videos are fun, cute, and colorful. They’re exactly what you would expect from a company like Nintendo, which has dreamed up some of the most iconic characters in video game history. The delights are all in the details: the zipper sound that reminds you to fold along the creases, the nicknames Nintendo uses for certain pieces (the three parts of the fishing rod are called Papa Bear, Mama Bear, and Baby Bear), and the way the Toy-Con components bounce up and down like a trophy earned in a game when you’ve finished building them. Leave it to Nintendo to make following directions actually feel fun. The cardboard itself is also sturdier and tougher than it looks. In fact, it took me a little while to just go for it and fold along the crease lines the way Nintendo demonstrates in its video, because I was worried about tearing or ripping it, which was never an issue.

I only wish Nintendo made it possible to take a closer look at each individual step for Toy-Cons that you haven’t assembled yet. I was only able to jump ahead to later chapters once I had already completed a project. While you can view the name of each step at any time during the tutorial, you can’t actually access those videos until you reach the corresponding point in the building process. It makes sense that Nintendo wouldn’t want Labo owners to perform any of these steps out of order, as doing so could lead to using the wrong components and therefore jeopardizing the final product. But I could imagine that parents assembling Toy-Cons with their children would appreciate a way to preview the process before getting started. (That being said, Nintendo does provide estimates for the amount of time each Toy-Con takes to assemble on the Make home screen).

My other concern is that once a child is finished building a Toy-Con, it’s possible that they could lose interest fairly quickly. The way these Toy-Cons use the Joy-Cons and the Switch to operate is fascinating and certainly a testament to the company’s creativity. But Nintendo may need to continuously update the Play section of the Labo with more games and activities to hold a child’s attention.

Nintendo has a history of being adventurous when it comes to experimenting with new types of gameplay. Who could forget the Virtual Boy from 1995, an ambitious but ultimately unsuccessful attempt at rudimentary virtual reality, or its Robotic Operating Buddy (R.O.B.) robot from 1985? But Labo doesn’t feel like any of these outlandish ideas. Perhaps it’s because in an era in which technologies like motion controls and virtual reality have already become the norm (or are getting closer to it, at least), we’re more open to gaming in unorthodox ways. Or maybe it’s the opposite, and Labo is a refreshing return to imagination in a world in which children are increasingly glued to their iPads. Labo could be a hit, or a flash in the pan. But it’s clear that Nintendo isn’t content with the Switch being just an ordinary video game console, and it’s going to continue trying to give you new reasons to buy one. 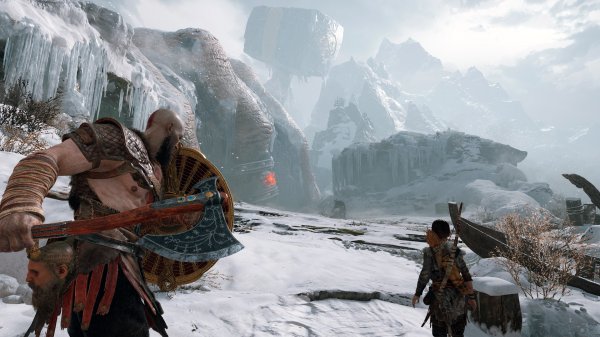 Review: The New ‘God of War’ Game Is Different, Bold and Demands Your Attention
Next Up: Editor's Pick