By Justin Worland and Chris Wilson

Plastic has been plagued with some bad press in the weeks leading up to Earth Day, which takes place Sunday, April 22, from a sperm whale that washed ashore in Spain with 64 pounds of plastic in its body to a 600,000 square mile area in the Pacific Ocean rife with trash.

Both headlines drew an outcry from concerned citizens calling for measures to protect the affected sea life. But as sad as the news may be, it is far from surprising. Plastic consumption has increased 20-fold in recent decades, with nearly a third of the material consumed bypassing waste collection systems and eventually winding up as pollution. That plastic debris often finds its way to the planet’s oceans, rivers and lakes, creating problems for aquatic species and, by extension, humankind.

The plastic pollution problem — the theme of this year’s Earth Day — isn’t going away any time soon. Plastic use is expected to double in the next two decades as manufacturers find new and varied uses for the material, according to a report from the World Economic Forum (WEF). In some ways, that could be a good thing. Plastic has aided human development by keeping food fresh, reducing the weight of cars (leading to reduced emissions), and providing material for new types of medical devices. Supporters of expanding plastic use say the material can be used as the building block of everything from electronics to skyscrapers.

But unless we change our approach to plastic waste, more plastic use will mean a dramatic increase in pollution. Only 9% of plastics are currently recycled, according to research published this year in the journal Science Advances. By one estimate, plastic debris kills over 100 million sea creatures annually. All told, 8 million tons of plastic are deposited in the ocean every year, according to a 2015 study.

To put that mind-boggling figure in perspective, TIME did an experiment: If all the plastic that winds up in the ocean over a single year was molded into LEGO bricks, how many life-size skyscrapers could you build with them?

The standard 2-by-4 LEGO block weighs 2.32 grams, meaning those 8 million tons of plastic waste could produce 3.4 quadrillion such pieces. With that figure in mind, we built the following simulation, showing just how many full-size replicas of New York’s iconic Empire State Building you could build with that number of LEGO bricks:

Methodology note: The typical 2-by-4 block is 31.8 millimeters long by 15.8 millimeters wide and 9.6 millimeters tall. The way LEGOs stack together leaves a tiny amount of space between them, so this simulation treats the length as 32mm by 16mm. Our life-size LEGO Empire State Buildings have a volume of about 900,000 cubic meters, close to that of the real thing.

Write to Justin Worland at justin.worland@time.com and Chris Wilson at chris.wilson@time.com. 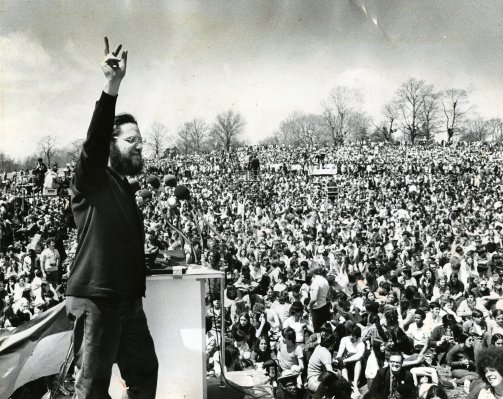 Behind the Photo That Made People Think Earth Day Was Founded by a Convicted Killer
Next Up: Editor's Pick