One person died after a Southwest Airlines flight was forced to make an emergency landing in Philadelphia after an engine exploded midair on Tuesday.

Jennifer Riordan, a bank executive from New Mexico and mother to two children, was killed after shrapnel from the flight’s blown out engine broke a plane window and struck her, the Associated Press reports. Riordan was the vice president of community relations at Wells Fargo bank and was married to Michael Riordan, the former chief operating officer for the city of Albuquerque.

The death marks the first fatality on a U.S. airline in nine years, National Transportation Safety Board (NTSB) chairman Robert Sumwalt said at a news conference Tuesday. The last fatal U.S. airline crash was on Feb. 12, 2009, when Colgan Air Flight 3407 crashed while approaching Buffalo, New York, according to the NTSB. Fifty people died in the crash, including 45 passengers, two pilots, two flight attendants and one person who was on the ground.

Now, U.S. airlines are facing the first fatality in nearly a decade after the plane engine blew out, sending shrapnel through the plane window and hitting Riordan.

The flight, a Boeing 737 traveling from LaGuardian Airport in New York to Dallas, landed at the Philadelphia airport around 11:20 a.m. after suffering an “in-flight engine failure of the left engine,” Sumwalt said. The NTSB will have investigators take apart and inspect the engine to figure out what went wrong.

Southwest confirmed the death of the passenger in a statement Tuesday evening.

“I want to extend my deepest sympathies for the family and loved ones of our deceased customer,” Southwest Airlines CEO Gary Kelly said. “They are our immediate and primary concern and we will do all that we can to support them during this difficult time and the difficult days ahead.”

Speaking at a news conference Tuesday, Kelly said the airline would work with the NTSB to understand the “root cause” of the incident and find any further actions they would have to take to make flights safer.

“At this point, it’s very premature to say what changes we might need to make, if any,” he said.

The fatality on Southwest comes after a year of declining flight deaths, according to the Aviation Safety Network. The ASN reported in January that 2017 was the safest year for commercial flights around the world, with 10 airline incidents that led to a total of 44 deaths.

At the time, President Donald Trump took credit for the low death rate. Despite saying he has been “very strict” on commercial aviation, Trump has not imposed significant safety regulations on airlines and growing airline safety has been attributed more to efforts by international aviation groups than the White House. 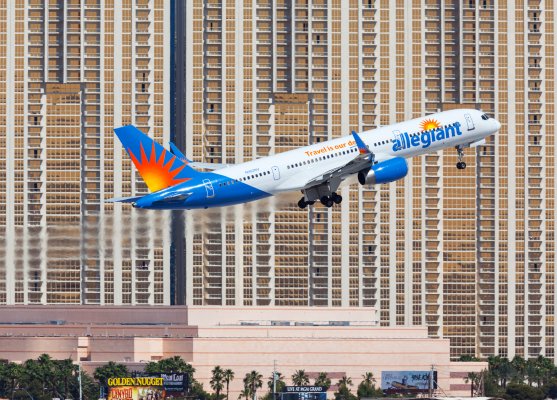 Allegiant Airlines' Stock Is in a Nosedive After a Scathing '60 Minutes' Report About its Safety Practices
Next Up: Editor's Pick